All caught up on this year's Oscar nominees (with the help of our collection of tasty movie-watching snacks, I trust)? Good, because it's almost time for the ceremony, which takes place next Sunday, February 28. Also because there may be some very, very mild spoilers below, but only if you're the kind of person who refuses to even read a Rotten Tomatoes synopsis until you've seen a film from beginning to end.

Much like the Super Bowl, the Academy Awards are far more enjoyable when watched with friends, who can help you forge lasting—at least for a couple of weeks or so—memories of the red carpet's most stunning gowns and most awkward interview moments, the ceremony's most rambling acceptance speeches and most bored reaction shots. So why not throw an Oscars party and serve your crew an enticing spread of finger foods and cocktails—or even a full meal, complete with dessert? (After all, the broadcast is more than long enough to warrant a few courses.) And, because everyone loves a theme party, why not include a few recipes that lend themselves well to Oscars-themed rechristenings—a Hateful Ward 8 cocktail, maybe, or Mad Max: Rocky Road? Tell you what—we'll do the heavy lifting of gathering the knockout recipes and the witty puns, and you can take all the credit. Or blame, in the case of the puns. (Seriously, apologies in advance.)

An Oscars party without the most essential of all movie treats? It'd be unholy—like a St. Patrick's Day party without beer. But if you're going to serve popcorn, take a few extra moments and ingredients and create a popcorn to surprise and delight, using one (or more!) of these bold flavoring schemes, including matcha and white chocolate, chicken dinner, and miso soup. Though you can make your popcorn on the stovetop, it's way easier to use a paper bag in the microwave.

Get the recipe for 7 Popcorn Variations »

The buzz has it that this is the year Leonardo DiCaprio will finally take home an Oscar—for his role in The Revenant, as a man who survives a bear attack. In honor of his performance, here are some bears you'll be only too happy to bite back. To make your own boozy bears, empty a bag of Gummi Bears into a bowl, pour in your liquor of choice, and let them steep for five to eight hours. Rum offers the best punning opportunities, of course, but try Bellini bears, made with peach gummies and Cava, or Negroni bears, made with orange gummies soaked in gin and Campari.

Get the recipe for Rummy Bears »

If you like Sly Stallone for Best Supporting Actor in Creed, pay proper homage to Rocky Balboa's hometown with a Philly cheesesteak dip. We brown tender, flavorful sliced ribeye and chopped onion, then mix it with Cheez Whiz—it really does the job better than anything else—for a lip-smacking-good accompaniment to crackers or chips.

Get the recipe for Philly Cheesesteak Dip »

What is a "bridge of fries," you may ask, other than a clever way to work in a reference to Spielberg's Cold War drama, Bridge of Spies? It's a carefully composed structure of crispy golden planks of potato, girded with soft, squeaky cheese curds and weatherized with a homemade beef gravy. Okay—it's poutine, but really, really good poutine. If you can't find fresh cheese curds where you live, try making your own.

Get the recipe for The Ultimate Poutine »

Even though The Danish Girl received mixed reviews, despite Eddie Redmayne's Oscar nod for a leading role, we can't resist the excuse to serve a light, Scandinavian-inspired appetizer in the form of Danish smørrebrød—open-faced sandwiches made on dense sourdough rye bread smeared with butter. There are endless ways to top them, but one of my favorite combinations is pickled herring, sliced red onion, and chopped dill.

These succulent, slow-cooked short ribs prove that you can get a taste of the good life without, you know, bringing the entire US economy down. Braising them in a blend of red wine, balsamic vinegar, and brown sugar leaves them fork-tender and coated in a rich glaze, ready for serving with a side of creamy, garlicky smashed potatoes. As good as they are, remember to leave plenty for your fellow partygoers. Greed kills!

With a Supporting Actor nomination for The Revenant and a starring role in the Best Picture–nominated Mad Max: Fury Road, Tom Hardy deserves a—ahem—"hearty" tribute dish. A traditional beef stew, made with tender, juicy beef chuck and loaded with onions, carrots, mushrooms, and peas, is just the thing to warm bellies on a cold February night, and good for feeding a crowd besides.

Get the recipe for All-American Beef Stew »

No, we absolutely will not suggest eating lamb to celebrate the nomination of Shaun the Sheep for Best Animated Feature! We would never! Sheep's-milk cheese, on the other hand, is a perfectly delicious and far less morbid choice. Inspired by April Bloomfield's famous dish at The Spotted Pig, these gnudi are made by rolling a ricotta filling in semolina, yielding dumpling-like balls of paper-thin pasta coating a soft, creamy center. The most important part of this recipe is using high-quality sheep's-milk ricotta—it's well worth searching out a specialty market or farmers market to find the good stuff.

What's the first thing you'd do once released after seven years in captivity? I know what I'd do: eat the meltiest, gooiest, most buttery grilled cheese sandwich I could find. (Well, that'd be in the top 10, anyway.) Made with rich Brie and Nutella, this sweet dessert version would be an excellent choice. We use crusty French bread and grill it slowly, allowing the fillings to really ooze into every pore.

Get the recipe for the Brie and Nutella Grilled Cheese »

This one is for those who like their movies and their ice cream action-packed. Get amped up on a whirlwind of Dutch process cocoa, marshmallows, and almonds, punched up with the addition of hazelnuts and white chocolate. Extra chunky and intense, it's ice cream worth fighting Immortan Joe for.

Get the recipe for Rocky Road Ice Cream »

Not only was Jennifer Lawrence nominated for her starring role in Joy, Inside Out stars Amy Poehler as Joy, an emotion personified trying to help a young girl cope with a difficult move. In the real world, of course, we have to find other ways to make ourselves happy—like this grown-up milkshake, made with amaretto liqueur, coconut flakes, coconut cream, and chocolate ice cream, and sure to put a smile on your face.

Get the recipe for the Amaretto Joy Milkshake »

When you're torn between suitors in Ireland and Brooklyn, as is the protagonist in Brooklyn, how can you possibly choose? Well, as a New Yorker, I'm a bit biased, but I think she should go with the place that has the best cocktails, which makes this decision a no-brainer. This delicious variation on a Manhattan is made with rye, vermouth, maraschino liqueur, and Amer Picon, a French amaro. It's hard to find, so feel free to substitute an Italian amaro like Ramazzotti, or a few dashes of bitters in a pinch.

Don't worry, there's not a thing hateful about this drink—if anything, it's exactly what you want to have on hand to keep a group of strangers peaceful, especially during a blizzard. It'll warm you to your toes with a combination of rye, pomegranate, orange curaçao, and oleo-saccharum—a syrup made of citrus peels muddled in sugar. You can even keep it in an insulated thermos and tote it with you for your next stagecoach ride.

Why did I include this one? With an average age in the 60s, Academy voters have gained a reputation for having somewhat, er, old-fashioned tastes. But more importantly, this is a batched version of an elegant cocktail—one of my favorites—that's perfect for a party. It makes enough for 12 drinks, works with rye or bourbon, and will make you feel as cool as a private eye in a Hollywood noir. As much as I'd like to see more progress in the Oscars, this is one traditional formula I'm happy to stick with. 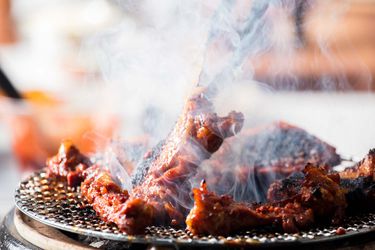 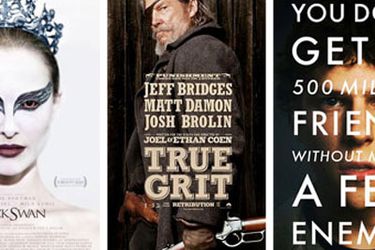 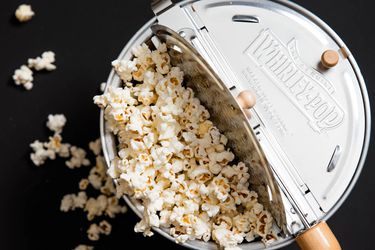