Puglia, the heel of Italy’s boot, is a picturesque region known for its prolific wine and olive oil production. It's also a historically poor area. This combination of agricultural abundance and economic scarcity is what produced the Pugliese cucina povera, the “poor cuisine” that, out of necessity, relies on local, inexpensive ingredients and culinary know-how that's been passed down through the generations. Orecchiette con le cime di rapa, which translates as "orecchiette with turnip greens," is a regional treasure that's emblematic of this traditional cooking style.

Cime di rapa are the leafy green tops and leaves of the plant that we know as broccoli rabe in the States. In the past, when farmers had to sell the lion’s share of their produce to wealthier regions, they would cook up the less-desirable discards, such as those turnip tops, to make their own meals. All three parts of the broccoli rabe (also known as rapini) plant —the stems, leaves, and florets—are edible. While the stems are delicious prepared in any number of ways (roasted, sautéed, or blended into a punchy, green purée), their toothsome texture is not desirable for this dish. So, for this recipe we separate the tender florets and leaves from the stalks, which can be reserved for another use. The cime di rapa are lightly blanched in boiling water which will later be used for cooking the pasta. Giving the rabe a head start like this softens it, and helps it turn into a velvety sauce later in the cooking process.

Orecchiette are a Pugliese specialty, where the "little ears" are always handmade with fresh semolina-water dough (in southern Italy, eggs were historically too expensive to be used for pasta-making). In Bari, the capital of the region, this history really comes alive when you walk down via dell'Arco Basso, commonly known as the "strada delle orecchiette" (orecchiette street, which gives Sesame Street a run for its money in my book), with women making pasta outdoors. They muscle through dough, rolling snakes of it on century-old wooden boards, then cut it and shape each individual piece of pasta over their thumbs before tossing the orecchiette onto screens to air-dry in the hot city sun. They’ve been making orecchiette the same way for generations, sometimes cutting the dough with hundred-year-old knives table knives, as one woman showed me. The process is both simple and profoundly nuanced.

While you need to use fresh pasta to make a truly traditional orecchiette con le cime di rapa, don't fret: You can make something almost as delicious with dried orecchiette. You just need to give the sauce a little extra love. The sauce starts with garlic, anchovies, and chiles which are cooked in a generous amount of olive oil until the anchovies have dissolved. Some of the rabe cooking water gets added to the skillet, and the mixture is brought to a boil while being swirled and stirred to form an emulsion. The cooked greens and pasta are added to the mix along with some extra, now-starchy cooking water. A high-heat finish involving plenty of tossing and stirring produces a creamy sauce with tender rabe that coats the pasta, with the bitterness of the greens playing off the peppery olive oil and savory anchovies.

There’s one thing you will never see on a plate of orecchiette con le cime di rapa: grated cheese. Aged cheeses (Parmigiano-Reggiano, Pecorino Romano, and the like) are another example of luxury ingredients that don't feature prominently in the cucina povera tradition. Instead, you'll find pastas garnished with toasted pangrattato, bread crumbs made from leftover stale bread cooked in olive oil. It's the perfect crunchy topping for this iconic Pugliese dish.

In Italy, toasted breadcrumbs are traditionally made with pangrattato—breadcrumbs made by processing stale bread. This recipe is written with instructions for making breadcrumbs from fresh or stale bread. We used a rustic sourdough loaf during recipe testing, but most types of crusty white bread will work fine.

This dish is best made with just the delicate leaves and florets of broccoli rabe; the fibrous stalks are discarded. If you don’t want to discard the stalks, you can use them for another purpose: Trim the ends, cut the stalks into 1 to 2 inch lengths and roast or sauté them with other vegetables. Or thinly slice them, sauté in olive oil, and fold them into omelettes or scrambled eggs. They can also be turned into a slightly bitter but delicious purée: Cook stalks in salted boiling water until tender, then blend with olive oil, lemon juice, and salt until smooth. The purée can be used as-is or mixed with ricotta as a pasta sauce of its own.

This dish is best enjoyed immediately. Leftover toasted breadcrumbs can be stored in an airtight container at room temperature for up to 1 week. 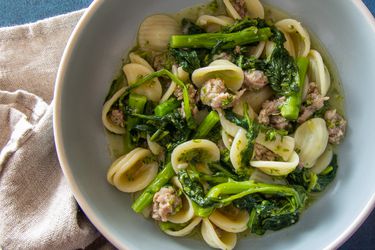 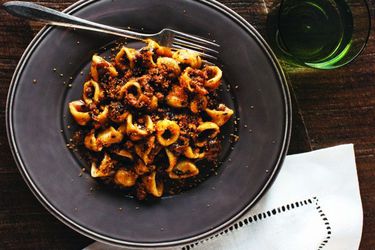