My home base of Astoria, Queens is awash in great loukaniko. Now strictly speaking, loukaniko is a Greek term for pork sausage, but it most commonly refers to orange-spiced sausages, for which every restaurant in the neighborhood seems to have its own unique recipe. These variations span a spectrum of seasonings like fennel, coriander, oregano, thyme, and marjoram; some are made from pork, others lamb, and still others, a combination of the two. You'll find loukanika either fresh or cured, partially dried, or even, occasionally, smoked. But one common thread between all their magnificent iterations is that they're almost always grilled, usually until they develop a nicely charred, crispy casing.

With so many top-notch loukaniko choices around every corner, I never saw much point to making my own. But eventually, inspiration struck, and I became determined to make a sausage that would capture my favorite traits of the very best loukaniko sausages in Astoria. To kick things off, I took some cues from cook and writer Hank Shaw to get me started on the right path.

From the very beginning, I knew I wanted to emulate the seasoning of one of my favorite loukaniko, which is gets its most pronounced flavors from orange and leeks. To maximize their respective impacts, I thought a mild meat base would be best. I settled on a ratio of three parts mellow pork shoulder to one part rich and fragrant leg of lamb. Since the best juicy links contain roughly 30% fat, I also added a pound of pork fatback to the mix.

I also have a preference for cured loukaniko, so I wanted to both age and smoke the meats slightly. Enter curing salt, which helps prevent any unwanted (read: nasty) bacterial growth during the process. I simply tossed the cubed meat and fat with three tablespoons of kosher salt and one teaspoon of pink curing salt and stuck it in the fridge while preparing the rest of the ingredients.

Figuring out how to season the sausage with leeks presented a bit of a quandary. Could I add in raw leeks, assuming that the fat in the sausage mix would soften them up during the cooking process, or would I be better off pre-cooking them? Not wanting to destroy a five-pound batch of sausage meat with flecks of tough leek, I decided to sauté four large leeks that I'd trimmed, washed, and finely diced. Don't be alarmed by the volume—as they cook, they'll loose moisture and reduce substantially. Once they'd cooled, I added them to my meat.

Now I was ready to grind! I passed the meat through a large cutting die, in order to get the coarser texture that's often equated with classic loukaniko.

The rest of the seasonings were more straightforward: Orange zest for that hallmark citrus touch, oregano and thyme for herbal notes, garlic for a bit of bite, and coriander for a touch of earthy spice.

After everything was ground and seasoned, I took the sausage for a spin in the KitchenAid, pouring in some chilled red wine and red wine vinegar for an added layer of acidity.

Give Me the Cure

After quickly stuffing the sausage into hog casings using my ever-handy five-pound vertical stuffer, I was left considering the cure. Thanks to that curing salt, I knew they'd hold up for a while in the fridge, but I'm no food scientist and I wasn't entirely sure how long I could let them dry out while still keeping the meat safe to consume.

Ideally, if I'd had enough room, I would have hung the sausages to dry. Instead, I decided to place the loukanika on a wire rack and let them sit in the fridge uncovered. Over the course of the night, the exterior lost its moisture and the links started to look a little more dry. A couple of days later, and the light-colored meat was starting to turn a deeper red.

Another winning characteristic of the best loukaniko (in my opinion anyway) is smokiness. To infuse the meat with smoke, a long, cold smoke is usually your best bet. Cold smoking essentially exposes the meat to a steady stream of low-temperature smoke, effectively smoking the sausages without cooking them. Cold-smoking is often part of the curing process for sausages, meats, and fish that won't be cooked all the way. It's also a technique that's best left to the pros, mainly in order to avoid bacterial growth that can occur when the process is mishandled. But in this case, since I'd be cooking these sausages to high temperatures, bacteria luckily wasn't a concern.

Short a cold smoker, I was left thinking how I could use the tools I had to get the job done. Looking at my grills and equipment, I had a moment of inspiration: I'd hang my sausages on the spit of my rotisserie*, while using a fire of only a handful of charcoal and one piece of a medium-smoking wood.

I got the set-up going; using a chunk of pecan, the sweet smell of smoke started flowing out of the grill at a temperature sufficiently low to avoid cooking the sausage all the way through. I let it run at just around 90°F for a little under two hours.

Barring the spit, this can be done by just placing the sausages on the cooking grate away from the fire.

Now that the links were nice and smoky, it was time to finish them up over some serious heat. I wanted that charred, crispy casing, so I cooked them over a nice, hot fire.

The sausages looked pretty damn perfect, but whether they'd even hold a candle to Astoria's truly great loukanika remained to be seen.

A first cut revealed a juicy link that was still tender from edge to edge, despite the beating it took on the searingly hot grill. The flavor was spot-on: a mild meatiness that let the bright citrus shine through, giving the sausage a summery feel that was pleasantly complemented by the aromas of oregano and thyme. Meanwhile, the coriander added an earthy depth and the leeks delivered a more subtle layer of freshness with their light, oniony flavor.

The only thing that was off was the texture. Keeping your sausage as cold as possible during preparation is a tenet of great sausage making—a bond between fat and meat is broken if the mixture gets too warm. Grinding and stuffing these sausages on a relatively hot day before I'd installed my air conditioners resulted in a minor textural breakdown. This is probably me being too hard on myself, though, since my guests all thought they were just fine and dandy.

To overcome my perceived shortcoming, I decided to split one down the middle and throw it back on the grill, creating a higher ratio of crispiness to mask the imperfect interior texture. This ended up being an incredible improvement. The extra crunchy bits were awesome and flavorful, while the sausage still stayed juicy even after it was hit by the heat another time.

As my small group of guests surprisingly made their way through nearly three-quarters of my massive load of loukaniko, opinions and suggestions started to emerge. One eater expressed a hankering for some fennel; another thought lamb would better balance the seasonings. But all those comments just go to prove that while there's no one "right" loukaniko, there's rarely one that isn't incredibly delicious, either. 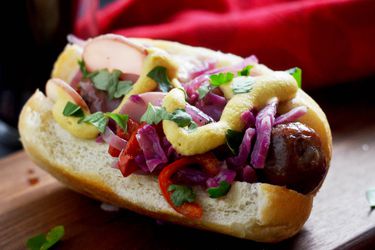 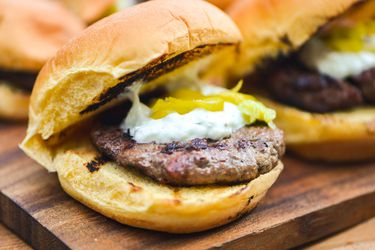