Dinner in 25: A Pantry Adventure

Improvising dinner with pantry ingredients—a routine we're all familiar with these days.

Sasha Marx
Senior Culinary Editor
Sasha is a senior culinary editor at Serious Eats. He has over a decade of professional cooking experience, having worked his way up through a number of highly regarded and award-winning restaurant kitchens, followed by years spent in test kitchens for food publications.
Learn about Serious Eats' Editorial Process
8:19

Three months ago—which feels like a lifetime ago—I had a day blocked off in the Serious Eats studio test kitchen to shoot a video for my pasta with spicy 'nduja sugo. And because that recipe is so quick and easy to put together, we wrapped on shooting in record time, even with my slow-talking, "stoned Ray Romano" (as the nicer segment of YouTube commenters have described my on-camera vibe) antics.

With plenty of time left in the day, a lot of 'nduja in the test kitchen fridge, and the cameras and lights already set up, we decided to mess around a little and shoot an off-the-cuff cooking challenge. At the time, this premise felt like an extremely low-stakes version of a television cooking competition, but now this challenge has become a daily routine for most of us: constantly rooting through cupboards and fridges to scrounge up ingredients for an ad hoc meal that doesn't require a trip to the grocery store.

Our visual director, Vicky Wasik, set the rules for the challenge. I had to make a dish for two people that:

I took a quick inventory of the test kitchen, and using the kitchen law of "if it ain't labeled, it's fair game," I annexed two portions of ramen noodles that Sho Spaeth had left unattended in one of the fridges (I had seen that he had made a nice bowl of ramen with one portion of the noodles for his lunch already, so I wasn't being a total monster). Along with the noodles, I grabbed a bunch of bottles and jars from the pantry to make a riff on sesame noodles, with the idea of emulsifying 'nduja (which, as we've established with a number of recipes, has the perfect texture and fat content for seamlessly melding into dishes) into the sauce along with Chinese sesame paste.

How did it go? Well, watch and see! I really enjoy this kind of on-the-fly, let's-see-what-happens cooking, and have loved seeing more and more people taking on this type of challenge while making food at home during the age of Covid-19. Improvising dinner doesn't have to be an ambitious endeavor, and not every meal is going to bring down the house as the best thing I've ever made, IDK, just woke up like this. It's heartening to see Eric Ripert making DiGiorno pizza at home.

Was this half-baked-idea noodle dish perfect? Absolutely not! But even if Sho didn't gush over it when I gave him a bowl to try (you can't steal a person's handmade noodles and then not give them a taste), he did say that he'd "still eat the hell out of it." I'll take that. Have you been going off-book and using up pantry ingredients in new ways in your cooking? Let us know in the comments what you've come up with! 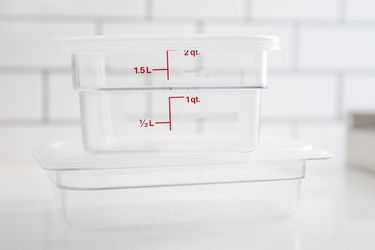