Octopus is tough in more ways than one. Sure, it's literally tough and requires some technique to make it palatable, but it's also tough in that it has no problem standing up to strongly flavored ingredients. Like kimchi. Octopus is great with kimchi.

After tuna, octopus is probably the most common main ingredient for poke, the popular Hawaiian chopped-seafood salad. Known as he'e in Hawaiian, octopus usually comes in two distinct forms in poke. The first is raw octopus, with its soft, mildly chewy (and, okay, let's just admit it: slimy) texture. Often you'll see it dressed with soy sauce and a touch of wasabi. The second form is boiled octopus, the same octopus you'd use for sushi or sashimi (tako, in Japanese).

This latter version is easier to make at home—getting precooked octopus is as simple as walking into any Japanese market or buying a raw octopus and dunking it in boiling water yourself. Finding octopus I'm willing to eat raw is much more difficult.

The key to making rubbery boiled octopus palatable is to slice it very, very thin. Anything thicker than, say, a stack of two quarters ends up inedibly tough and chewy.* Sliced octopus is great in a classic poke base of sweet onions, scallions, soy sauce, and sesame oil, but adding a little kimchi and powdered kochukaru (Korean chili flakes) makes it even greater.

Though now I'm wondering how octopus that has been cooked until completely tender would taste in poke. I'm guessing good.

I love the mix of textures in this particular poke variation. Crunchy, tender, and chewy all at once in every bite. Make sure that you get some of the kimchi juice into the dressing as well! 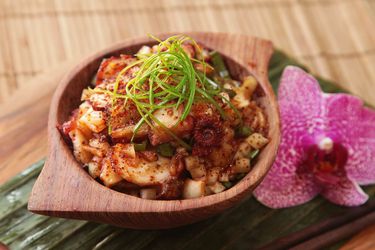 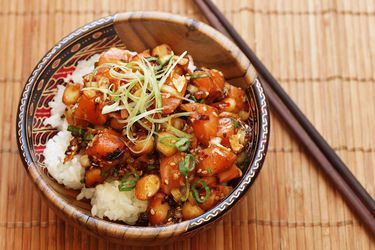