This versatile recipe delivers a flavorful red pepper tomato sauce for a stew or dip.

Jenny Dorsey
Jenny is a professional chef, author and speaker specializing in interdisciplinary storytelling fusing food with social good. Her food and work has been featured in outlets such as Food Network, Oxygen TV, Eater, Food & Wine, Bon Appetit, among others.
Learn about Serious Eats' Editorial Process
(6)
0
In This Recipe

“I can tell you three ways right now how to eat obe ata: for breakfast, lunch, and dinner!” Chef Simileoluwa Adebajo of Eko Kitchen, San Francisco’s first Nigerian restaurant, and I both laugh a little as she says this. Obe ata or obe ata din din, which translates from Yoruba to “pepper stew” and “fried pepper stew,” respectively, is a Nigerian tomato- and pepper-based sauce, stew, and soup of limitless variations, and her enthusiasm for it is contagious.

Adebajo's suggestions are so varied that I could feel my own excitement growing at the prospects of eating obe ata all day and every day as I worked on a recipe for it. “In the morning, you can use obe ata din din as the base for eggs, kind of like shakshuka, and serve it with fried plantains. For lunch, obe ata stirred in with chicken and over long-grain rice. And for dinner, as a fish stew with eba [cassava granules].”

This versatility seems to be why obe ata has been embraced so thoroughly in both homes and restaurants. It transitions easily from a stew-like base for both meat or vegetarian dinners to an elegant sauce (“din din” denotes further sautéing in oil to make obe ata thicker and concentrate flavor) that can be served in many more ways, including as a dip. “My mother used to make huge batches that would last for two weeks when she was a medical resident, so every night she only needed to prepare the sides and mix-ins,” Adebajo tells me. “It’s one of those things that are so adaptable, hence why it was the first thing she taught me how to cook.”

The Versatility of Obe Ata

Esther Ikuru of The Cooking Pot, a homestyle Nigerian restaurant in Charlotte, NC, tells me that obe ata recipes requiring a wide variety of additional or specialty ingredients (beyond the common chicken, beef, and eggs) are nicknamed “lots of speed bumps” as both an inside joke and praise to the maker for keeping things interesting (it can also be seen as a signal of social status, for having enough money to buy multiple proteins for the dish). In Nigeria, add-ins can range from snail meat and prawns to turkey (a popular choice of protein, especially wings or gizzards) and ram.

At Eko Kitchen, Adebajo serves obe ata as part of a chips-and-dip set, as well as a dip for Nigerian yam fries. It quickly became the breakout star of the menu. “The customers just want to know what’s in the sauce. People would burst into the kitchen trying to figure it out. At first, I was confused—why was everyone latching onto this?”

Adebajo soon hired a food consultant who urged her to lean into what her guests were clamoring for. “If people keep talking about it, I need to listen to them. So I started collecting feedback on how they liked it. Sweet? Spicy?” After tweaking her recipe just a touch (“for a more general audience, we toned down the heat”), she’s set to launch a jarred line of obe ata to be sold at the restaurant and specialty retailers in the Bay Area. Adebajo coyly adds that even though the overall recipe is simple, there’s always something she doesn’t disclose when she shares it. “I can’t tell you everything!”

Obe ata’s charm and its mystique comes from the fact that its preparation is relatively straightforward yet requires a special touch to unlock deeper levels of nuance. “The definitive quality that translates between all versions is the spice and freshness,” Adebajo tells me. “There should definitely be habanero or Scotch bonnet pepper for that bite—and those are fresh...Using fresh ingredients is really important.” Ikuru adds the final result should never be sour, but savory and a touch sweet, the flavors coaxed out of the core ingredients with careful technique. “A true African meal is never cooked with sugar,” she says.

“In my opinion, [obe ata] is so special because everyone has their own way that they think is ‘the best’,” Adebajo tells me. Given the most important part of obe ata is the trio of pepper, tomato, and onion, much of the art in its preparation comes down to how one handles those components. Extracting the utmost depth from these ingredients is what differentiates one version from the next.

Adebajo roasts all her vegetables in the oven for over a half-hour before blending. “There’s just a different depth of flavor, a type of aroma that’s totally different and incredible when you take the time to do this step.” Others may opt out of blending the vegetables and instead chop them finely for a far more textured result.

Then there are the additions, like fresh ginger (“My mother would add this when she was in a certain mood—though I’m not sure what that mood was, really,” Adebajo says with a chuckle), dried crayfish (freshwater shrimp that are sun-dried, an important building block of Nigerian cuisine), or Nigerian curry powder.

Choices like the oil used, whether a plain vegetable one or viscous red palm oil, also make a noticeable impact on obe ata's color and taste. “[Red palm oil] is a fresh oil, and it’s totally different than something that’s been homogenized,” Adebajo says. “Most often it’s organic, unrefined, and adds a sweet flavor to the stew, so now you have a sweet and spicy profile in the stew.” (The red color comes from the antioxidants beta-carotene and lycopene.)

The ubiquity of obe ata across Nigeria also offers an interesting glimpse into the blending of cultural practices in the country. The stew is firmly part of Yoruba cuisine, an ethnic group encompassing roughly 44 million people worldwide and 21% of Nigeria's population. Despite the fact that the Yoruba people are mostly concentrated in the country’s western states, obe ata can be found on the menus of buka joints (casual eateries) across Nigeria. It has “become a staple of the non-Yoruba people of the East as well,” Adebajo says, “because food always travels [with people].”

Unfortunately, much of obe ata's more distant history is difficult to trace. The transatlantic slave trade and subsequent British colonial rule (from 1865 to 1960) destroyed the oral history and knowledge of cultural practices and food traditions that had been passed down through families for generations. “A lot of the food was ingrained with Yoruba religion, and it was sometimes used for religious sacrifices,” Adebajo tells me. Because the British were missionaries, Yoruba food culture was banned as a means to erase ties to the past, and its people “re-programmed to eat foods with Western influence.”

There is a profound sadness as Adebajo speaks of the lasting impact of colonialism in Nigeria, where the British were able to gain control of the country through a deal with the Royal Niger Company, a commercial trading company they chartered, which eventually sold its territories to the British government. The Royal Niger Company later became part of Unilever, which today sells much of the packaged foods in Nigeria.

“The people who colonized our country are still dictating the foods people can eat,” Adebajo says, her frustration palpable. “Just look at milk, it wasn’t even part of the Nigerian diet until it was brought in from overseas.” Obe ata hasn’t escaped the influence of processed-food companies, either: Many modern recipes will call for Knorr-brand bouillon cubes, which are part of Unilever’s portfolio.

For Adebajo, venturing down the road of food entrepreneurship with obe ata has become a call-to-action to shape a better future for Nigeria. “Nigerian food is serious!” Adebajo exclaims. “Just like how people say European food is serious, or how Asian food has rich history, African food has some of the deepest cultural heritage in the world.” As someone with a master’s degree in developmental economics, Adebajo's foray into restaurants may have at first seemed like a departure from her plan to work for the United Nations or the Abdul Latif Jameel Poverty Action Lab, but now, Adebajo tells me, she sees how much this stage of her life aligns with her overall mission to share Nigerian culture.

While she knows eventually she’ll head back into the global development side and move back to Nigeria to do so, Eko Kitchen as it stands now is her way of reshaping the Nigerian narrative abroad. “This is not just a recipe that fits nicely into your keto plan,” she says. “Partaking in this food, you’re partaking in the Nigerian way of life.”

A Stew Or A Dip

This recipe, adapted from two different recipes from chefs Simileoluwa Adebajo and Esther Ikuru, presents a baseline method for making the basic sauce, which can then be served with various meats like a stew or cooked down into a condiment for dipping.

Its main ingredients are red bells peppers along with hot fresh chile peppers like habaneros (or Scotch bonnets), tomato, onion, garlic, and more. Beyond that, other decisions for flavoring the sauce are up to you. You can use more or less red palm oil to stain it a deeper maroon color and give it an earthier, sweeter flavor; you can add flavorings like Nigerian curry powder, fresh ginger, and ground Cameroon chiles, which are both spicy and smoky; you can even choose whether to make it a totally smooth purée or leave it chunkier for some texture.

If you serve it as a stew, you have just as much flexibility with what you put in the stew and how much you use of it. This recipe makes a large quantity of sauce, so you can divide it up and use it in different ways. Try briefly simmering cooked chicken in it (as the recipe below suggests), or try turkey, beef, lamb, or goat—cooked tripe is a popular option, too! Hardboiled eggs can be shelled and gently simmered in the sauce as well. Lots of vegetables, like sweet potatoes and greens, can be cooked in the sauce for a vegetarian option.

As a dip, it's great with plantain chips or with fufu (a starchy dish made from pounded and boiled cassava root and green plantains).

The best thing is to make a big batch and get creative: obe ata offers a world of serving possibilities.

If you are unable to find Fresno chiles, you can substitute that amount with another mild red chiles. The number of hot chile peppers called for here doesn't make a very spicy sauce, so feel free to add as many more as you wish based on your own tolerance for spiciness.

If you can't find Lion's brand curry powder, you can substitute another curry powder of your choosing (note that it will taste different), or leave it out if you don't want to add those spice flavors to this dish.

Ground Cameroon pepper is a hot and smoky dried pepper powder. If you can't find it, you can substitute ground chipotle powder, or freshly ground black pepper.

Obe ata can be kept in an airtight container in the refrigerator for up to five days and in the freezer for up to three months. 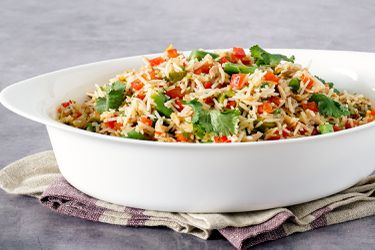