How oat milk is made, how to cook with it, and everything else you need to know.

I recently called my credit card company to report fraud on my account. When I told the customer service representative that I was sure someone had stolen my identity and was recklessly racking up charges, she let me know as gently as possible that it was, in fact, I who had spent a small fortune on espresso drinks.

A few years ago, while still living in the Bay Area, I started to notice a new non-dairy milk popping up on felt-board café menus alongside the established members of the "alt-milk" community: almond, soy, and rice milk. These shops were now offering something called oat milk. At first I was skeptical of this milky but decidedly not milk substance. It's milk-ish. While I had grown accustomed to the idea of rice, almond, or even cashew and hemp milk, the idea of milking oats seemed silly—and borderline gross. I was sure the trend would remain confined to the bubble that is Berkeley’s quirky hippy food scene. But to my surprise, when I moved to New York City two years ago, oat milk was everywhere. And it quickly grew on me.

Oat milk is slightly sweet, without the almost sour taste that steamed cow’s milk sometimes takes on. It has just enough oaty flavor to be recognizable but not so much as to be off-putting or clash with coffee's natural acidity. It’s creamy, rich, and foams well for lattes and the like, which is a big part of why oat milk has taken coffee shops by storm (the other major factor was a well-devised marketing and product roll-out campaign from Swedish company Oatly, which introduced oat milk to the US market by first putting it in the hands of coffee shop baristas before making it available for purchase in grocery stores). But what, exactly, is this newly famous milk, how is it made, and—other than putting it in coffee—how can it be used?

What Is Oat Milk?

Though other plant- and nut-based milks have been produced and consumed for hundreds of years, oat milk is a relatively new product. It was created in the 1990s by Rickard Öste, a Swedish scientist who was researching lactose intolerance and exploring cow’s milk substitutes. In the mid-nineties, Öste founded Oatly, which took Europe's alt-milk scene by storm before its introduction to the US market.

“The foundational [tenet] of Oatly was the idea that... [oats have] inherent nutritional value and can be sourced abundantly,” says Mike Messersmith, Oatly’s general manager. The crops needed for oat milk production “can be grown everywhere from Sweden to Canada to Australia. And the sourcing practices and the agricultural practices associated with that do not over-tax our natural resources....We chose not to be an almond company or a soy company or a cashew company because of that criteria.” Though producing non-dairy milks results in fewer greenhouse gas emissions than raising and milking cows, these alternatives still have an impact on the environment. Oat milk production requires less land and less water than many other milk alternatives.

In Oatly factories, oats go through a process that uses enzymes to break down the oat starches and retains the oat fiber in the final product. Some oat milks start with an oat powder that is rehydrated, while others are fortified with an oat syrup.

To make the creamy, rich liquid coffee-drinkers have gone wild for, Oatly and many other oat milk companies combine their oat juice with vegetable oil, which helps emulsify the mixture and gives it body and thickness akin to whole milk. Home cooks who want to make their own oat milk can ditch the emulsifiers and follow the method used for popular nut milks: Rolled oats can be soaked in water, blended, and then strained through fine mesh or cheesecloth. The pulp is discarded, and the resulting liquid "milk" is saved.

Without the added oil, DIY oat milk won’t necessarily take as well to frothing for espresso drinks or subbing into recipes as the store-bought versions. That added fat is part of what makes oat milk such a successful substitute for cow’s milk in the fancy coffee drinks that drain my wallet.

How to Use Oat Milk

Most of us became familiar with oat milk because of its meteoric rise in popularity at coffee shops, which was not a fluke. “The structure of plant-based milk is definitely different than cow’s milk,” says a New York–based barista who goes by DQ Flook, acts as a latte art instructor, and competes in latte art competitions. “Working with oat milk is amazing. I’m really happy I can make a good latte for my customers. I personally like oat milk, like other customers, in terms of creaminess and taste—especially when it mixes with coffee.”

Though we have yet to test oat milk as a cow’s milk substitute in our recipes, we have a longstanding relationship with oats. They appear in our olive oil chocolate chip cookies, where an oat slurry stands in for eggs and provides the vegan cookies with the necessary water, protein, and emulsifying properties. Replacing cow’s milk with oat milk in oatmeal is as simple as deciding you’d like to double up on oat flavor. You could opt to mix a splash of (unflavored!) oat milk into any number of soups that call for cream, too. And though they may be rendered slightly thicker or thinner, you can confidently swap oat milk into nearly all of our smoothies that call for cow’s milk, soy milk, or almond milk.

Stella, our resident pastry wizard, is also a fan of using oat milk for baking projects. "I love oat milk, and it's great for baking. Broadly speaking, commercial milk substitutes aren't a problem in baked goods, since the primary purpose of dairy in most instances is to provide hydration first and foremost—plus some boosts to browning with lactose (a naturally occurring sugar), and perhaps body, which is why water isn't usually a great swap."

When using oat milk in baking, Stella sticks to commercial brands, which are more stable and less starchy than a homemade milk. "In most cases, the milk doesn't provide substantial flavor in baked goods, so milk substitutes work well so long as their flavor is a good match; in that regard, oat milk's mildness is particularly useful compared to stronger-flavored alternatives like almond or coconut milk." That said, Stella is careful when it comes to substituting oat milk into vanilla custards, and other recipes that get most of their flavor from dairy milk. Oftentimes, oat milk companies provide substitution instructions on the back of their cartons, which you can use as a guide—but probably not a guarantee—as you test substitutions in your baking.

Though oat milk can be gluten-free, it’s not as sure a bet as with nut milks, which never contain gluten. Though oats are gluten-free, many factories that process oats do so on the same machinery that is used to process wheat-based products. “Oats themselves are inherently gluten-free. The challenge that you sometimes face—and this is a reason why people do need to check their labels—is what can sometimes happen is the same milling operations or the same rail cars that are transporting the oats to market can lead to cross-contamination with wheat and other gluten sources,” Messersmith says.

How to Choose an Oat Milk

Just a few years ago it was nearly impossible to find oat milk at the grocery store. Now, I come across it at many New York bodegas right next to orange juice and pre-made sandwiches. With so many oat milks to choose from, it’s worth putting a few extra minutes into differentiating between the good and bad before you bring one home. We haven’t yet done a comprehensive oat milk taste test—let us know in the comments if that’s something you’d like to see—but in general, there are some things you should look for when you’re choosing an oat milk.

Don’t be put off by the oil included in most oat milks. That’s what gives the milk all the richness and body that you’ve come to love. That said, be aware that plenty of oat milks have added sugar along with gums used for their thickening and emulsifying properties. While some of these products might be perfectly delicious, others might leave a grainy or syrupy texture in your mouth. For mixing into coffee, experimenting within baking, or pouring into soups and smoothies, choose an oat milk with a relatively short ingredient list—oats, water, and maybe a vegetable oil. As oat milk has become more popular, many companies have also come out with flavored versions, so be on the lookout for those. Otherwise, you may accidentally go home with pumpkin-spiced oat milk, which might be great in your coffee but not so much in a bowl of soup.

Now that oat milk is so widely available and so many companies have dedicated themselves to making the next best product, the options for sipping and substituting are limitless. It’s time to think outside of a cup of coffee—though that’s a very good place to start. 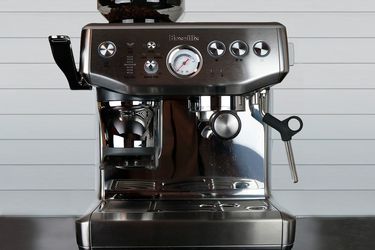