32 Spring Street, New York NY 10012 (at Mott; map); phoneNoHere; firstpizza.com
Getting there: 4/6 to Spring; N/R to Prince; J to Bowery
Pizza style: New York–Neapolitan
Oven type: Coal-fired oven
The skinny: A huge tourist spot, to be sure, but the pizza here is good. Cash only. Whole pies only. Stay away from the clam pie, even though it may be recommended elsewhere
Price: Large plain pizza, $19.50; small, $15.50. White clam pizza (small only), $26

"Do you know where Lombardi's Pizza is, mate?"

If the English accent didn't give him away as a tourist, it would have then been the fact that the gentleman asking stood with us on the corner of Spring and Mulberry streets and didn't know that one of the most popular pizzerias in New York City was just a block away.

I'll just say it: Lombardi's is kind of a big tourist thing. After having been hyped in countless national newspaper and magazine stories, guidebooks, and travel shows, this "first pizzeria in America" is pretty much packed any night of the week with people more likely to hail from Manhattan, Kansas, than Manhattan Manhattan. (OK, that's probably an exaggeration, but poetic license, you know?)

Indeed, I first ate Lombardi's as a tourist myself when I visited NYC in the late '90s. "Coal-oven pizza?" I remember thinking as I waited in line outside on the sidewalk. "What the hell is that?!?" An hour or so later, I was thinking "Coal-oven pizza, where the hell have you been all my life?!?"

Boy, I had a lot to learn about pizza (and eventually did when I moved here in the year 2000). If you find yourself in the same boat I was all those years ago, follow along after the jump for a quick Lombardi's download.

The first two things you should know about Lombardi's is that it's cash only and serves whole pies only. Why? That's just the way most of these old-school coal-oven joints are.

So bring cash. And a crew to help you eat. If you forget the cash, don't worry. There's an ATM just outside the door and one in the original, pre-expansion dining room. (You'll just have to pay the ATM fee, a once-exorbitant $2.75 that's now sadly all too common citywide.)

The second thing you should know is that Lombardi's is known as much for its white clam pie as it is for its regular red-sauce pizza. Long before all the fancy-pants pizzerias in NYC started clamming up, Lombardi's was doing this seafood pie, which is most often associated with New Haven, Connecticut.

Naturally, we tried one. It's served only as a small pie ($26), is loaded with shucked clams and garlic, and comes with a quartered lemon in the middle for squeezin' a squirt o'er your slice. This is a dry pie, and it benefits from a drizzle of olive oil, too; ask your server for some if you don't have a bottle on your table.

The clams, though, were rubbery, as they were when I visited around this time last year. After a slice each, my dining companion and I moved back to the ...

The standard plain pie, made with fresh mozzarella and a San Marzano tomato sauce, finished with some Romano cheese and a chiffonade of basil.

This is the pizza you should be getting at Lombardi's. The crust is a bit dry and not as airy in its crumb as some of the other coal-oven heavyweights, but it's crisp enough, pliant, and has enough flavor to make even a plain pie interesting enough that you'd finish the "bones."

The sauce is par for the course at a New York coal-oven pizzeria, which is to say that the Italian tomatoes are simply crushed and lightly seasoned with salt before going on the pie. It's a little bit on the acidic side of the spectrum, but otherwise bright and fresh-tasting.

I'd say a pie here could stand a little more cheese, but what's there is creamy while hot though a little rubbery once it cools. Eat fast, friends.

Over the years, I think I've let my growing aversion to flocks of fanny-packed tourists influence my opinion on the place. I'd shunned it in the past, viewing it as a purveyor of subpar pies. But Lombardi's serves a solid pizza (clam pie excepted, of course). I'm not saying it's the best example of the "New York–Neapolitan" style (I prefer Totonno's in Coney Island or Patsy's in East Harlem when it's on its game), but I'd be comfortable sending out-of-towners there as an introduction to the genre. Which is good, because it's very accessible — especially if you happen to be a block away.

So some of you may have noticed the reference to Lombardi's being the nation's "first pizzeria" earlier in this post. (And indeed, the pizzeria's URL is firstpizza.com.) That is and isn't exactly true. Here's the deal....

The original Lombardi's started as an Italian grocery store back in the very late 1800s, after Gennaro Lombardi immigrated to New York City in 1895, according to info in the Ellis Island records that my friend Scott Wiener of Scott's Pizza Tours shared with me. (The guy does tons of crazy pizza research like that!) Lore has it that Italian shop owners from Naples at that time began making and selling pizzas in their bakeries or groceries as a way to use up the day's excess dough. Pizza has its roots, after all, in peasant-food tradition.

After a few years, Lombardi's pizza proved popular enough that he transformed his grocery into a pizzeria, applying for and receiving the first pizzeria license in New York City — and the nation. This was in 1905.

Oh, and this all happened at 53 1/2 Spring Street, about a block and a half west of present-day Lombardi's. Yes, Lombardi's moved.

See, it operated as a pizzeria at the original location for decades, passing from the original Gennaro Lombardi to his son and then to his grandson, also named Gennaro (aka "Jerry") Lombardi. In 1984, though, a sour economy forced it to close. Around that time, too, vibrations from the subway had cracked the original oven, making it unusable.

By 1994, though, Lombardi's had reopened — in a long, narrow space at 32 Spring Street that was once a coal-oven bakery. You can read part of that tale in this fascinating New York Times story. And for an even more thorough timeline, check out this rundown on Interesting America. It's now owned by John Brescio, a longtime friend of grandson Jerry Lombardi, and Richardo Minchalo.

In 2004, Lombardi's expanded from its narrow confines into the corner space next door, able to accommodate the crowds that now flock to it. I, however, still prefer to sit in the original narrow dining room back behind the bar. Ask for a table there, if you don't mind waiting extra for it. It's a little more intimate and old-school — especially if you can get a comfy booth.

So you see how it sort of is and sort of isn't the "first pizzeria" in the nation. (And it's certainly not the oldest continuously operating one. That would be Papa's Tomato Pies in Trenton, New Jersey.)

Lombardi's as the Grandfather of NYC Pizza Culture

How can I mention Lombardi's without mentioning the role it's played in spawning many of the city's storied pizza parlors? Above is an admittedly crappy photo of the "Pizza Family Tree" that the New York Times printed in conjunction with a great 1998 article on NYC pizza history. It tells the tale.

Totonno's in Coney Island? Anthony "Totonno" Pero started at Lombardi's. The Totonno family says that it was actually Pero who started making the pizza at Lombardi's and not Lombardi himself. They'll point to a photo on their wall that shows Pero and Lombardi in front of the Manhattan pizzeria. In it, Pero's shoes are dusted with flour — but not Lombardi's. That, they say, is proof of who really made the pizza. Not in dispute is that Pero perfected his craft at Lombardi's before setting out on his own in 1924.

John's of Bleecker Street: John Sasso was trained at Lombardi's.

Patsy's in East Harlem: Pasquale "Patsy" Lancieri, some folks say, also started at Lombardi's. Patsy's then spawned Grimaldi's, which is now chained out in various locations out west. Patsy's itself chained-out across NYC. The original Patsy's, however, is not part of the mini chain.

Oh, boy. Just click the image above and squint to make out the blurry info there. You'll see just how influential Lombardi's was. 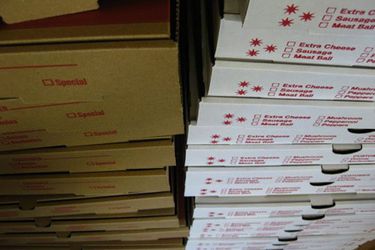 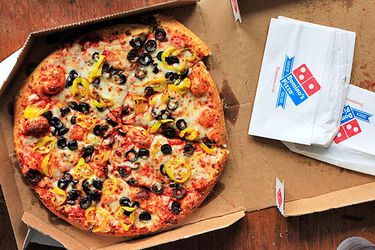