After working through loaf after loaf of sweet Northern-style cornbread trying to find the best recipe, I thought I'd be be all cornbread-ed out. Instead, I found myself just wanting more of that super moist, cakey bread, especially since I'd thought of so many ways to doctor it up.

It probably would have been smart to wait until actual Thanksgiving, when I'd have a hungry audience, to try out my variations. But I actually wound up sitting in my kitchen one cold Saturday night, churning out one cornbread after another, combining sweet, savory, and spicy flavors until I had five iterations that really clicked, each taking an already excellent cornbread recipe to grand new heights.

One thing I didn't try out with my base cornbread recipe were other sweeteners. I had thought of using brown sugar, honey, and molasses, but I needed to keep some constants, and sticking to white sugar ended up being one of them. So, when I went back to the kitchen for further cornbread exploration, trying out maple syrup as the main sugar source was the first thing I wanted to do.

In addition to the syrup adjustment—I still used a little sugar to get the right level of sweetness—I added in roughly chopped walnuts that I had toasted in the skillet prior to preheating it in the oven. With just those couple of changes to the recipe, I wound up with a bread that was really different.

The maple syrup leaves its distinctly sweet, sappy imprint on the cornbread, giving it a new depth that melds well with the sweet, grassy corn. The walnuts add a great nutty complement and some contrasting crunch. These are flavors that would be a welcome addition to most any holiday table.

Get the recipe for Maple Walnut Cornbread »

Keeping with the Thanksgiving feel, the next variation I tried out was pulled straight from my cranberry sauce experience. I picked up a bag of fresh cranberries and roughly chopped a cup of them to mix into my batter.

Since fresh cranberries are so tart, I upped the sweetness level to balance things out. I started by swapping the white sugar for light brown sugar, to impart a little molasses flavor, and then added a 1/3 cup of honey on top that. Finally, since cranberry and orange have been such a great pair in my cranberry sauces, I added in the zest from one orange to cash in on that fruitful marriage.

This ended up being one of my favorites of the lot. The honey adds a really nice sweetness, while the brown sugar gives that light molasses touch I was looking for. Both are enough to keep the cranberries from coming across as bitter or astringent. Instead, they're transformed into pleasing pockets of mild tartness that contrast brightly with the otherwise sweet bread.

Get the recipe for Orange Cranberry Cornbread »

Bringing a little breakfast spirit to my cornbread, I went with a cheddar, bacon, and scallion mixture in this loaf. I started by frying up six slices of diced bacon, leaving a couple tablespoons of bacon fat in the pan after removing the meat. The skillet then went into my preheated oven while I made the rest of the bread.

I kept the base recipe mostly the same here, except that I cut back the salt to account for the saltiness of the bacon. I added in six ounces of coarsely grated sharp cheddar and half a cup of finely sliced scallions along with the bacon.

When the batter was ready to go, the bacon fat was nice and hot, sizzling as I poured in the batter. The crust began to set immediately, and the rest of the bread cooked during its 20 minute stint in the oven.

Get the recipe for Cheddar, Bacon, and Scallion Cornbread »

Jalapeño-cheddar cornbread has made recurring appearances throughout my summer barbecue series, thanks to my personal love for all things Tex-Mex. Since I had already used cheddar in the previous cornbread, I decided to try out pepper jack here to shake things up.

Since I now have a better cornbread recipe to begin with, this one is the best jalapeño cornbread I've ever made. It's super moist and sweet, with enough contrasting heat to make things interesting. If you prefer it extra-hot, you can certainly leave the seeds and veins intact when dicing the jalapeño; if you want it more mild, regular Monterey jack or cheddar can be subbed for the pepper jack.

Get the recipe for Jalapeño Jack Cornbread »

Having just returned from a trip to the Southwest, I had green chilies on the mind, and wanted to do a roasted poblano cornbread. While at the market, I thought some added sweetness and color by way of red pepper would be fitting, so picked up one of those too, as well as with a bag of frozen corn kernels.

Get the recipe for Roasted Pepper Cornbread » 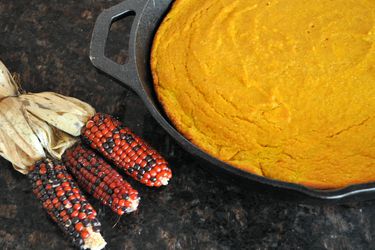