While visiting Iceland earlier this year, I stopped at a tourist cafe on the black sand beach in Vik for a slice of skyr cheesecake, and I can't stop thinking about it. I mean, that's the life of a pastry chef; visit one of our planet's most iconic basalt formations, and walk away with indelible memories of cheesecake.

If that's something you've ever made before, whether to top a chocolate cream pie or as the basis of Swiss buttercream (or even for my homemade Klondike bars), then you'll be in familiar territory here.

The idea is to quickly cook the meringue to about 175°F, a process that should absolutely not take any longer than 10 minutes. It's okay for the timing in a recipe to vary by a minute or two here or there, based on the equipment in a given kitchen, but if things seem to be moving more slowly than that, feel free to turn up the heat.

During this time, continually scrape and stir the mixture of egg whites and sugar to ensure nothing scrambles against the sides of the bowl. As the mixture warms, it will transform from a dark and translucent mixture, an opaque, almost white syrup. It should be totally creamy, with no lumps of cooked egg (which will either indicate insufficient stirring or excessively strong heat from the water bath).

Once the meringue is fully cooked, toss it on a stand mixer and whip until thick and roughly tripled in volume, but still a little warm. Meanwhile, carefully melt the bloomed gelatin until liquid and quite warm, anything above 100°F but below 212°F will be fine.

Because the cheesecake itself is so tangy, thanks to the Greek yogurt or skyr, I'm not wild about pairing it with fruit. Instead, I enjoy it with bittersweet toppings; think caramel sauce and chocolate shavings or garnishes like Valrhona Crunchy Pearls, malt balls, or classic chocolate sprinkles. 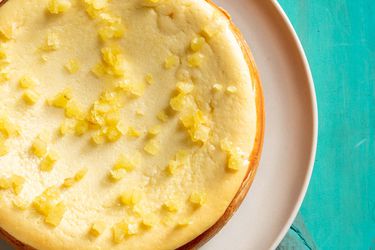 Lemon and Ricotta Join Forces in This Tart and Tangy Cheesecake