With tart Greek yogurt, whipped cream, and airy meringue, this may just be the fluffiest cheesecake around.

Stella Parks
Editor Emeritus
Stella Parks is a CIA-trained baking nerd and pastry wizard, dubbed one of America's Best New Pastry Chefs by Food & Wine. She was the pastry editor at Serious Eats from 2016 to 2019.
Learn about Serious Eats' Editorial Process
(10)
0

While visiting Iceland, I stopped at a tourist cafe on the black sand beach in Vik for a slice of skyr cheesecake, and I can't stop thinking about it. I mean, that's the life of a pastry chef; visit one of our planet's most iconic basalt formations, and walk away with indelible memories of cheesecake.

If that's something you've made before, whether to top a chocolate cream pie or as the basis of Swiss buttercream (or even for my homemade Klondike bars), then you'll be in familiar territory here.

The idea is to quickly cook the meringue to about 175°F (79°C), a process that should absolutely not take any longer than 10 minutes. It's okay for the timing in a recipe to vary by a minute or two here or there, based on the equipment in a given kitchen, but if things seem to be moving more slowly than that, feel free to turn up the heat.

During this time, continually scrape and stir the mixture of egg whites and sugar to ensure nothing scrambles against the sides of the bowl. As the mixture warms, it will transform from a dark and translucent mixture, to an opaque, almost white syrup. It should be totally creamy, with no lumps of cooked egg (which will either indicate insufficient stirring or excessively strong heat from the water bath).

Once the meringue is fully cooked, toss it on a stand mixer and whip until thick and roughly tripled in volume, but still a little warm. Meanwhile, carefully melt the bloomed gelatin until liquid and quite warm, anything above 100°F (38°C) but below 212°F (100°C) will be fine.

Because the cheesecake itself is so tangy, thanks to the Greek yogurt or skyr, I'm not wild about pairing it with fruit. Instead, I enjoy it with bittersweet toppings; think caramel sauce and chocolate shavings or garnishes like Valrhona crunchy pearls, malt balls, or classic chocolate sprinkles.

This tangy vanilla profile of this cheesecake pairs best with the bitter contrast of a crust made from dark-chocolate cookie crumbs or chocolate graham cracker crumbs, whether store-bought or homemade, traditional or gluten-free. The crust pictured here was made with our homemade Oreos (wafers only). Of course, this is a matter of personal taste, so feel free to use whatever sort of cookie crumbs sound best.

Not all Greek yogurts are created equal, which can make a big difference in a recipe where it's the main ingredient. Look for brands that contain nothing but milk and active cultures, such as Fage and Chobani, or try skyr instead (we've tested this recipe with both Siggi's and Icelandic Provisions). Steer clear of any yogurt or skyr artificially thickened with gums or pectin, as its high moisture content will destabilize the cake.

Any brand of powdered gelatin will work quite well in the finished product, but be aware that outside the US, gelatin may be formulated to a slightly higher strength. Take care when adapting the recipe to sheet gelatin, as the exact bloom strength of a particular grade may differ substantially from that of powdered American gelatin. For more information, please see the unexpected variables that may cause gelatin to misbehave.

Wrapped tightly in plastic to protect it from odor-absorption, this cheesecake can be refrigerated up to one week. 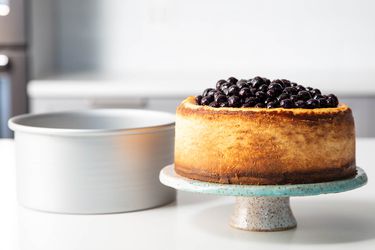 For the Most Jaw-Dropping, Stupid-Tall Cheesecakes, You Need This Pan