No need to go in search of a slice joint. You can make a New York-style pizza at home any time you want, starting with this faithful and perfectly calibrated recipe for the sauce.

J. Kenji López-Alt
Culinary Consultant
Kenji is the former culinary director for Serious Eats and a current culinary consultant for the site. He is also a New York Times food columnist and the author of The Food Lab: Better Home Cooking Through Science.
Learn about Serious Eats' Editorial Process
(42)
0
In This Recipe

Unlike Neapolitan pies, which generally use a simple, uncooked sauce of fresh or canned tomatoes and salt, New York by-the-slice pies use a heavily seasoned cooked sauce. The key to great New York-style sauce is creating balance between sweetness, acidity and heat, with a definite herbal backbone. Furthermore, it needs a texture that's thin enough enough to spread, but thick enough to keep your pizza from turning soggy during the de rigeur fold-and-carry.

You can pull off the easiest recipes in a New York minute: simply purée tomatoes with garlic, olive oil, and Italian seasoning then reduce it over a low flame. The results are not bad—certainly a step-up from overly sweet and herby canned pizza sauces—but the goal here at The Food Lab is for something a little better than simply "not bad." We're after great. Time to hit the kitchen.

A Blend of Fats Builds Flavor

Most pizza sauces start with a base of extra-virgin olive oil, which is fine, but there's a better option. Is there anyone in the food world who has yet to hear about Marcella Hazan's amazingly simple and delicious tomato sauce with onion and butter? Made by simply simmering tomatoes, butter, and a couple of onion halves (the onion gets discarded after cooking), it produces an exceptionally smooth, complex, and delicious sauce.

French chefs have known for years that adding butter to a sauce can help round off the rough edges and give it a richer, fuller mouthfeel. This pizza sauce is no exception. Simply replacing one of the two tablespoons of extra-virgin olive oil I was using with unsalted butter added sweetness, complexity, and smoothness to my sauce without creating any extra work. (I left some of the olive oil in for its peppery bite.)

I also decided to use Marcella's onion trick, further upping the sweetness.

Most recipes call for either dried oregano or dried "Italian seasoning," which is mostly dried oregano and basil. My immediate thought was to replace the dried herbs with fresh. Imagine my surprise when after cooking two sauces side-by-side, one with dried oregano, and another with fresh, there was barely any difference at all.

Many chefs assert that fresh herbs are superior to dried herbs, and they're right—some of the time. Most herbs contain flavor compounds that are more volatile than water, which means that any drying process that removes water also ends up removing flavor.

But it's not always the case, and here's why. Savory herbs that tend to grow in hot, relatively dry climates—like oregano, for instance—have flavor compounds that are relatively stable at high temperatures and are well-contained within the leaf. They have to be, in order to withstand the high temperatures and lack of humidity in their natural environment. Other arid-climate herbs like rosemary, marjoram, bay leaf, thyme, and sage fare similarly well in the drying process.

I found that as long as I made sure to cook the dried herbs for long enough to soften their texture (I sauté them right from the beginning in the oil-butter mixture), the flavor I got out of them was just as good as using fresh—and a whole lot cheaper and easier.

Basil, on the other hand, has to be added fresh. I tried adding it chopped right at the end as I would with most fresh herbs in order to maintain its flavor, but found that it wasn't right for pizza sauce. It was better to simply add whole sprigs of it while the sauce was simmering and remove them right at the end.

Purée Your Own Canned Tomatoes

I knew that I wanted to use canned tomatoes, since they are much more consistent year round. (I shudder at the thought of making a fresh tomato sauce out of bland winter tomatoes.) But which tomatoes should I use? Pretty much every brand has five offerings:

So diced tomatoes are too firm, crushed tomatoes are too inconsistent, and tomato purée and paste are too cooked. This left me with the whole canned tomatoes. I opted for those packed in juice, giving them a quick whir with my immersion blender to purée them right after I added them to the pot. (A food processor or food mill are equally effective, but harder-to-clean options if you don't have an immersion blender.)

The best tomatoes should have high levels of both acidity and sweetness; the best sauces will have those flavors as well, but they need to be in balance. Slow cooking is the best way to achieve it.

Canned tomatoes invariably have some citric acid added to them in order to increase their acidity. Slowly reducing the puréed tomatoes on the stovetop not only creates new flavor compounds, adding complexity to the sauce, but it also gets rid of water content, intensifying the flavors that are already there.

One other reason to go slow: If you aren't really careful, high heat can cause unwanted browning, created roasted, caramel notes in your sauce. This isn't a good thing. I tend not to be careful, so I hedge my bets by keeping the heat minimal.

After an hour of slow simmering, the sauce was nearly perfect, but was missing a couple of key elements. A little extra sugar helped to balance out the newly-intensified acidity, and a pinch of pepper flakes added a not-overwhelming level of heat. Cooking a new batch and adding the pepper flakes to sauté in the butter-olive oil mixture right from the beginning made it even better.

In the end I had a sauce with just the right balance of flavor for my New York-style pies. Sweet, a little hot, and intensely savory, with a texture that helps it meld in beautifully with the cheese, the way a good pie should. And here's a non-shocker: It's also good served with pasta. 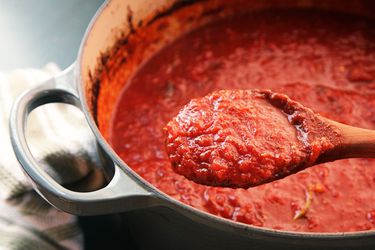 What Type of Canned Tomatoes Should I Use? 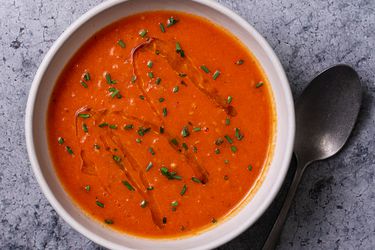