Man. Every time I think humankind has created every form of cocktail bitters imaginable, someone goes and proves me wrong. New bitters brands just keep coming, some with unusual flavors and others with delicious variations on classic styles. I'm working my way through the growing cornucopia of cocktail bitters, sampling the wares of upstart bitterers to let you know which bottles are worth buying.

The offerings I've reviewed here demonstrate the creativity of today's producers of bitters. From your traditional cherry and orange bitters to more esoteric styles such as hop and fig, here are several bottles to seek out (and a couple that are skippable).

Bittercube bitters are the creation of Nicholas Kosevich and Ira Koplowitz, two former bartenders who now own a cocktail consultancy in Wisconsin. Bittercube's products are made in Madison, WI, at Yahara Bay Distillers and use no extracts or oils. Bittercube products include six regular flavors, and occasional special-edition bitters. I found the ones I tried mighty impressive.

Blackstrap is a molasses-based bitters, with strong clove flavors and aromas of sassafras and sarsaparilla. Drop these atop the foam on a cocktail made with egg white; the aromas will make the drink smell very fragrant, spicy, and welcoming. Verdict: I've tasted a lot of bitters in this job, and I've never previously come across one that tasted so strongly of sassafras or sarsaparilla. I really enjoy the Blackstrap, and I think they're a fun addition to any cocktail geek's bar. (Available online)

Bolivar is a light style of bitters, though it's still quite bitter in flavor. Based on a 19th-century recipe, these taste almost like a bitter herbal tea, with chamomile, dried fruit, and a whiff of cinnamon. Verdict: Unusual, but very tasty. Try them with gin. (Available online)

Jamaican #1 is ALLSPICE. Whew, sorry for the all-cap shouting, but holy pimento dram. Jamaican #1 makes a strong statement right out of the gate; I'd certainly use these in rum cocktails, especially those drinks calling for rich, funky rum such as an agricole or Smith & Cross from Jamaica. I can't imagine many white rums standing up to its assertiveness. Verdict: A favorite. Killer addition to a Dark and Stormy or other cocktails with dark rum. Would be great in tiki drinks, too. (Available online)

Jamaican #2 is much more subtle. The #2 uses grapefruit peel and a bit of juice to add a layered grapefruit flavor to the bitters. Verdict: Use these tasty bitters in daiquiris and other light, summery rum cocktails. (Available online)

Door County Hop Bitters: a limited edition product made from Chinook and Cascade hops. It's a total hop bomb, with the fruity bitterness you expect from a hoppy beer. Verdict: If you love really punchy IPAs, you should certainly try this. Pair it with citrus and soda, plus gin if you like. (Available online)

Cherry Bark Vanilla is a little light on the bitterness, allowing the cherry and vanilla to come through strongly. You'll also taste cocoa and just the barest hint of almond. Use these in your favorite whiskey and rum cocktails. Verdict: Not the bitterest of bitters, these would pair nicely with a traditional aromatic bitters, such as Angostura, for use in an old fashioned. (Available online)

Orange is your typical orange bitters, made with dried peel and the spices you often find in orange bitters: cardamom and coriander. Verdict: The Orange is nice, but if you already have a favorite orange bitters, there's little reason to change. (Available online)

Bill and Lillian Buitenhuys run AZ Bitters Lab in Chandler, Arizona. In 2011, Bill and Lillian started making bitters as a hobby—they launched their business a year later. You won't see glycerin or oil essences in these bitters.

Más Mole is chocolatey and spicy-hot, blending cacao nibs with three types of chilies. A little bit of these will go a long way in a drink, so add them with care. These are a little spicier than other mole bitters I've tried. Verdict: If you like mole bitters but think they're normally too wimpy, the Más Mole is for you. Get your tequila and rum drinks ready. (Available online)

Orange Sunshine: Made with fresh and dried orange peel, fennel, and saffron. The flavor is decidedly bitter and orangy, with hints of anise and other herbs. I don't find the saffron to be that noticeable, but the orange flavor is bright. I find the orange shines through a bit more than in, say, Regan's or Angostura's orange offerings, both of which play up the spices. Though I'd rather use Regan's or Ango orange in many drinks, the AZ Orange would be nice in cocktails where you really want a hint of bright, fresh orange to accent other flavors. Verdict: Buy if you're looking for a fresh, juicy orange bitters. Use in an old fashioned or martini. (Available online)

Figgy Pudding conveys strong flavors of clove right up front, with cinnamon and cardamom in the background. The fig flavors are secondary, and seem to be there to round out the spice and bitterness with a bit of sweetness. I really wanted to taste more fig, though I do really like the way the spicy flavors interact with each other. The website suggests pairing this with "anything brown, bitter, and stirred." I vote for a rum Old Fashioned, where the flavors of clove and warm spice would really shine. Verdict: I think AZ is on to something good here, but the Figgy Pudding needs a little tweaking before I can recommend it. (Available online)

Deborah Williamson and Bryan Calvert of the restaurant James in Brooklyn started Cecil and Merl in 2012 as a retail outlet to sell small-batch, handcrafted products. They started with cheesecake and then branched out into bitters, with recipes from the bartender Justin Lane Briggs. (Briggs was opening bar manager at James.) The lineup currently includes two styles:

Cherry: The freshest, brightest tasting cherry bitters of the three I tried for this piece. Briggs told me that he finds most cherry bitters a bit too sweet. His version has a strong, vibrant cherry flavor, with just hints of vanilla in the background and the bracing bitterness you'd expect. Use these in a range of cocktails; they'd be great with whiskey or rum, of course, but they'd be just as good with tequila or gin. Verdict: A favorite. Remarkably versatile, these would taste just as good on ice cream as they do in cocktails. (Available online)

Apricot: Just as good as the cherry, the apricot bitters have hints of rosemary and cinnamon; were it not for the bitterness, the apricot would taste almost pie-like. Briggs notes that both cherry and apricot brandies were historic cocktail ingredients, and so apricot seemed like a natural flavor to try for their second batch of bitters. Verdict: Delicious and complex. Try these in rum, brandy, bourbon, or genever cocktails. An Apple Brandy Old Fashioned will shine with a few dashes of these apricot bitters. (Available online)

Based in Los Angeles, Bitter Tears offers a line of bitters named after women, both fictional and real. I sampled two:

KiKi: French lavender with elderberry and ginger: Kiki is nice and subtle. If you've ever walked within 10 feet of lavender at a farmers' market, you know that the aroma is hard to ignore. Lavender is hard to work with; use too much, and whether food or cocktail, whatever you're making will taste like hand soap. The Kiki's nicely balanced, and the ginger lends a gentle warmth. Verdict: Get Kiki for your next gin soiree. (Available online.)

Lolita: Sweet and sour bitters based on tart cherries and vanilla beans. Lolita tastes, well, like cherries and vanilla, and there's a hint of sweetness. Whatever bittering agent they use needs a bit of punching up, because these were some of the least bitter bitters I tasted for this piece. Verdict: Skip for now. (Available online.)

Zachary Feldman is a food critic for the Village Voice, and in his spare time, he creates Bitters, Old Men cocktail bitters. A few years ago, he penned this Serious Eats piece about making your own bitters at home. The recipe he provided, Krangostura, is also among the flavors he offers for sale. In addition to his line of commercially available formuations, Feldman also custom-designs bitters for bar clients. For example, when the bartender Naren Young was still at New York's Saxon & Parole, he came up with a recipe for a jazzed-up dirty martini. One ingredient in the drink was an olive bitters, commissioned from Feldman.

Giandu-Me: A special batch, released for Tales of the Cocktail, Giandu-Me is flavored with chocolate, hazelnut, and a hint of cognac. I don't really understand the frenzy that people feel when they're around a jar of Nutella, but if it tasted as complex as these bitters, I might like it more. Verdict: A favorite. Giandu-Me reminds me of a sophisticated dessert course, with a plate of bitter chocolates and nuts and a glass of brandy. They're just the thing to use in aged rum cocktails. (Available online.)

Roasted Macadamia does just what it says on the bottle. It's nutty and somewhat creamy tasting. Verdict: Fun flavor. A nutty bitters like this would clearly work in whiskey cocktails, but they're also fun for tiki heads; use 'em in tropical drinks. (Available online.)

Smoke Gets in Your Bitters gets its smoke from Lapsang Souchong tea. It's a richly smoky bitters, without the earthy peatiness of smoky Scotch, the grassy flavors of mezcal, or the meatiness of bacon-washed spirits. In other words, if you want to add smokiness to a drink without adding potentially unwelcome flavors, these are the bitters you need. Verdict: Great way to add smoky flavors to a cocktail, whether it's made with white spirits or brown. (Available online.)

Great in '28 is based on another 19th century recipe, this one from the 1828 book The Cook and Housewife's Manual. Juniper and grapefruit are the stars here. Verdict: I liked the Great, but they weren't my favorite of Feldman's offerings. Gin is an obvious pairing, but aquavit would work as well. (Available online.) 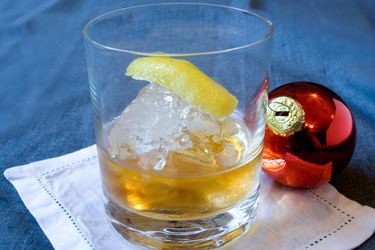 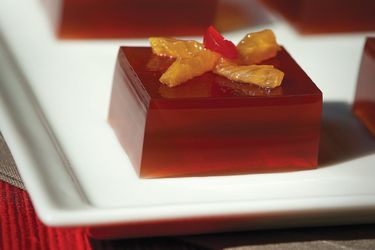