"Duck tongue?" my housemate asked with her eyebrows furled. "I didn't know ducks had tongues!"

For duck-tongue novices, the nature of the organ can elicit both confusion and curiosity. Why do ducks even possess tongues? Do they need them to quack?

For lovers of the delicacy, the question as to what makes the organ so prized is a no-brainer. Surrounded by a faint hint of meat and papery thin layers of cartilage, duck tongue is predominately a vehicle for juicy pockets of fat. At barely two inches in length, the tongue may seem small and insubstantial, but its flavor is intensely ducklike. When freshly fried, duck tongues are positively absorbing with a crisp surface and a creamy, slightly fatty interior that melts in your mouth.

Unlike that of mammals, the avian tongue possesses a bone that runs throughout the middle of the organ. And, instead of being covered on top in taste buds, tiny papillae protrude on either side of the tongues. While the tongue of cows and pigs are muscle meat, varying only somewhat in texture from the flesh on bones, the tongues of ducks bear no resemblance to duck meat.

Don't let its culinary status as a "delicacy" deter you from seeking out and cooking duck tongue. The preparation is simple: a brief marinating period, followed by a quick frying in a shallow pool of oil. Best of all, you can adjust the seasonings in your duck tongue to suit your mood or menu.

With Thanksgiving just around the corner, I'm dreaming up my ideal nasty bits menu. The main course is yet to be settled, but duck tongue is sure to be among the appetizers. I first encountered duck tongue at a Thanksgiving meal in a Cantonese restaurant, and the bounty of so many little tongues on one large plate gave me much reason to be thankful. When served at a Cantonese restaurant, the typical seasonings used are soy sauce and rice wine, with just a touch of sugar and white pepper.

Chinese seasonings are only a starting point. Duck tongues also take beautifully to hints of curry, like cumin or turmeric. Worcestershire would add a tangy kick to the mixture, as would chili sauce, oyster sauce or anything else savory that's sitting in the cupboard. A thin coating in egg whites and cornstarch is all that is needed prior to frying; the fat present in the tongues will render the surface perfectly crisp.

If, instead of deep-frying, you'd rather stir-fry the tongues, do so in plenty of oil with aromatics that will not exude too much liquid, such as garlic, leeks, or green onion. The key here is to keep the tongues as crisp and dry as possible, giving the duck fat a chance to render.

Finally, for those of you who have also pondered this very subject while snacking on said tongues: A brief search on Google yields the tentative consensus that the organ aids in manipulating the food in the duck's mouth, rather than contributing to its signature quack. 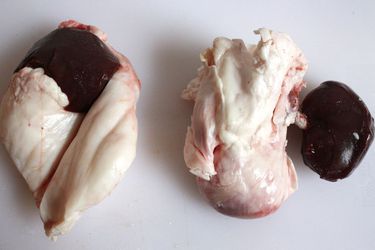 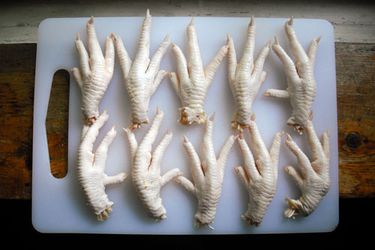