Hot summer days call for water sports, and in Kyoto and Kagoshima, Japanese families cool down with an aquatic diversion one called nagashi somen. It translates to "flowing noodles," and involves being very dexterous with somen, the thin wheat noodles traditionally eaten ice-cold.

Families split bamboo reeds in half and prop them up like slides in their backyards. A hose is placed at one end of the contraption and handfuls of somen are dropped into the water. The host yells "Ikuyo!" as the noodles shoot forth, and party guests attempt to catch their dinner with chopsticks. Those nimble enough to fill a bowl with noodles are rewarded with summer's bounty: fresh cucumbers, tomatoes, scallions, ginger, and shrimp, all topped with a tsuyu, a rich condiment made of shoyu and dashi. Who can imagine a better way to cool down and distract oneself from the heat?

To the Japanese, nagashi somen is as evocative of summer as running through sprinklers and swimming in cool rivers. In fact, the practice was popularized by enterprising sons and daughters of Nippon as a way to celebrate the crystal clear streams in Tosenkyo, a gorge in Kagoshima Prefecture. I imagined that shimmering water as the days grew ever shorter and frigid in Brooklyn and found myself longing for sunshine, the comradery of a summertime barbecue outdoor parties, and anything to eat that wasn't roasted, confited, or braised.

Though there are beautiful restaurants throughout Japan where one might participate in nagashi somen, the closest experience I could find in New York was an at-home nagashi somen machine on Amazon for $60 that, once assembled, included a motorized baby-blue moat for somen. A tiny ice mountain rested above to keep the water chilled. The device, an invention inspired by the somen parties in Tosenkyo, kawaii-fies the experience and makes it portable.

But what the machine gains in convenience, it loses in fun. I froze penguin-shaped ice cubes to scale the alp and plucked noodles from the basin as they lazily circulated by, but I felt no closer to Japan or to summer. In fact, it felt even more like winter as the ice mountain melted and eventually detached and plunged into the basin, spilling ice cold water all over my lap. Where was the challenge I'd read about? Where was the excitement?

As I watched more nagashi somen videos, huddled in the cold dark evenings of the protracted winter, I began to think of how lovely it would be to have real nagashi somen without ever leaving my tiny studio apartment.

No, I then thought, what a nightmare. My beautiful hardwood floors would be flooded. I shuddered at the thought of all my furniture sticky with sesame seeds and shoyu. Where would a pipe even go?

But as I stood at my window and looked down at the sidewalks frozen with grimy ice, I realized I could not just stand by as winter raged on. I began dreaming of a rig that would wind around my entire apartment, with my loved ones laughing and sharing bowls of noodles, warmed, if not by the heat of the sun, then by the joy in our hearts. Before I went to bed, I sent an invitation to 20 friends so I couldn't back out. Even worse than failing would be having to cancel the party entirely.

I'm an industrious New Yorker, and I live walking distance to Lowe's, which I visit often to warm up and dream about an apartment I will live in one day that can accommodate both a dishwasher and a conventionally sized toilet. Usually I leave with handfuls of paint samples, which I take for no other reason than that they are free and have beautiful, aspirational names like Going to the Chapel, Mouse's Back, and Chilled Chardonnay. But a few weeks ago, I skipped my usual paint sample haunt and wandered around the plumbing department like a flaneuse amongst so much PVC bric-a-brac.

Originally, I'd wanted to construct a grand contraption of spit PVC pipes jointed together. The rig would begin at my kitchen faucet, wind around the bookshelf in my den, and turn a corner into my bathroom, depositing noodles uncaught by guests and the running water in my tub, like the world's grandest hamster tunnel. On the advice of more practical friends, I settled for a propped-up PVC pipe that extended from inside my den to outside my window. I didn't think it'd be too much trouble, but the pipe was essential to my plan. Without it, there could be no nagashi somen.

I flagged down an employee and told him I was looking to buy PVC piping and have it split in half. This was the only part of my plan I was sure about at the time. Since chopping down a bamboo reed in some enchanted forest nearby was out of the question, I needed to find something close. I assumed the rest of my concerns—how to get water in the pipe, how to get water out of the pipe—would fall into place so long as I found a suitable length of pipe. The Lowes employee furrowed his brow and reclipped his pen to his clipboard before he responded.

"We can't split pipes here and there's nothing that looks like a split pipe," he said. "This is the plumbing department. The point is to keep the water in the pipe. A split pipe wouldn't do that."

I said nothing, hoping he would change his mind or offer a solution. Isn't that what Lowe's employees are there for? I didn't think I was asking for much.

"You could buy a handsaw and split the PVC pipe yourself. But actually I wouldn't even recommend that. The edges would be very sharp."

Dejected, I began to wonder if I should to scrap the plan completely. A friend who accompanied me encouraged me to keep my chin up and look around. I slipped down the aisle and saw an entire row of metal half pipes, originally meant, I believe, for air ventilation. They were exactly what I had in mind. I put two five-foot pieces in my cart.

My first piece of advice regarding bringing nagashi somen into your home is to listen to the people who support and love you. Follow your heart. If you believe in yourself, anything is possible.

My second piece of advice is to buy a hose at least the length of your apartment (30 feet was fine for me), a faucet-to-hose adapter, a giant tub to catch water, and a roll of duct tape.

The day of the party arrived and I had not yet attempted a dry run. So, a few hours before guests arrived, I taped the ends of my pipe together and scoured my apartment for a structure slightly higher than my window frame. Water pressure alone could probably move the noodles through the pipe, but I figured it couldn't hurt to get some extra help from gravity.

I duct-taped one end of the pipe to the top of a kitchen cart and stuck the other end outside my window onto my fire escape. Under that, I placed a clean plastic bin to catch water, since I like my downstairs neighbors and didn't want to lie to them about why their backyard had become a hockey rink the next morning. Nothing in my apartment was the height of the joint in the track, which was quickly falling apart from the combined weight of the pipes, but that problem was easily fixed with a few books stacked on a chair. I taped the hose to the kitchen-cart, right before the pipe. A few guests had arrived at this point, and I called for someone to turn on the faucet. A stream of water ran through the pipe and collected in the tub, a thick cloud of water vapor rising into the air. I breathed for the first time that day. We were ready for our first round.

Somen comes dry in narrow bundles tied with paper. I estimated about one 90-gram bundle of noodles for every two party guests. While I prepped the somen (boil according to package directions, strain, rinse until cold so the noodles don't overcook, toss in a little oil, and reserve in a colander or bowl), I asked my guests to prep their bowls with condiments.

The nice thing about a nagashi somen party is that, once you go through the trouble of setting up a rig, the burden of flavor and variety falls on relatively cheap accoutrements. So it doesn't cost very much at all to make your guests feel as though they are Adam or Eve laying virgin eyes on the garden of Eden.

My spread included bowls of scallions, sesame seeds, sprouts, enoki mushrooms, tomatoes, cucumbers, nori, and furikake. These are all traditional, but I can't imagine anyone would mind if you decided to go your own way. Next time I'll try pressed tofu and edamame; someday when I'm rich I'll put out caviar and truffles. Shrimp or grilled meats are standard when it comes to protein, but I went with lobster since it felt more celebratory. Most crucially, I filled a pitcher (no spills!) with tsuyu, a sweet and savory dipping sauce that you can buy pre-made or make using equal parts soy sauce, mirin, and dashi. (I used the powdered MSG version called hondashi, but don't tell anyone.!)

After my guests lined up alongside the pipe, I yelled "Ikuyo," dropped handfuls of somen into the running water, and watched my friends dive in with their chopsticks. Some were fairly agile, and most were at least able to wrangle half-a-bowl of noodles. It seemed like the most overconfident of the gang were the least lucky, and I happened upon one friend, a tall and strapping sort, who grimaced when he admitted he hadn't been able to catch anything at all. Lucky for him, I set out onigiri just in case.

In between sessions, I crawled out onto the fire escape and passed the partially full bin to someone inside to empty into the sink. We strained the leftover somen out with a colander and reused it. Not ideal, but it worked well enough, and my friends were kind enough to take turns on water duty.

During the last heat of the evening, a friend with a wonderful British accent used my Karaoke machine to host commentary. "And it looks like Sarah's in the lead and better pick it up. Wait, she's using her hands, that's a DQ, you're out!"

Another pal took over my duties at the pipe, so I had a chance to survey the room. It didn't feel like July or August, exactly, but there was something about the party that brought out the intimacy and mischief of a summer night. As I went to fix myself a cocktail, I caught a guest pouring a bottle of Champagne down the pipe.

"Ikuyo!" we all cheered back. 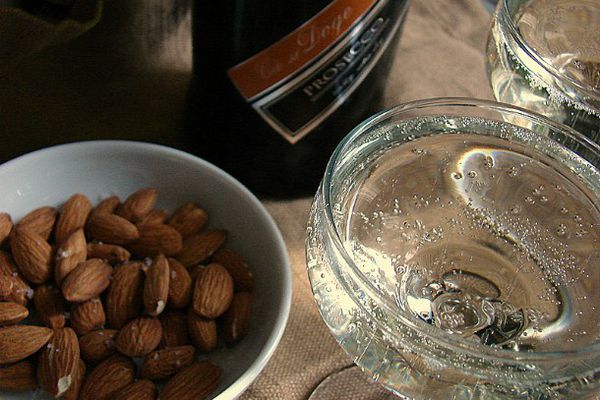 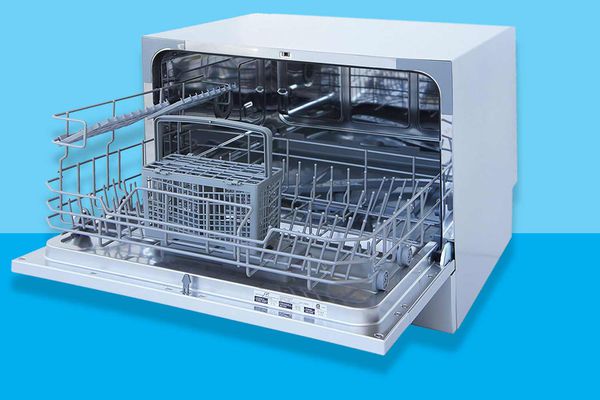 Transform Your Small, Crappy Apartment With a Countertop Dishwasher 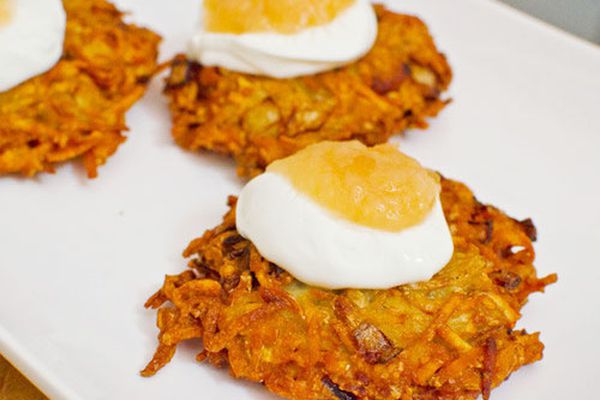 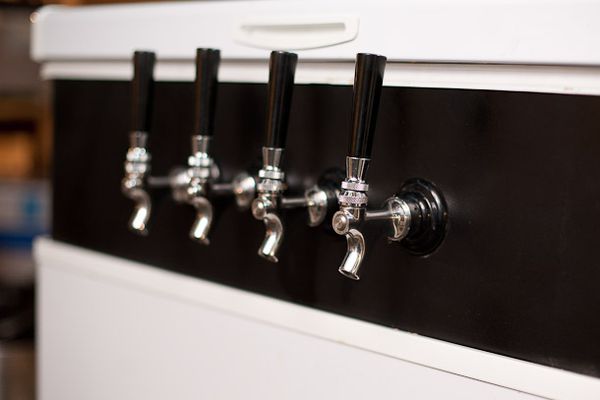 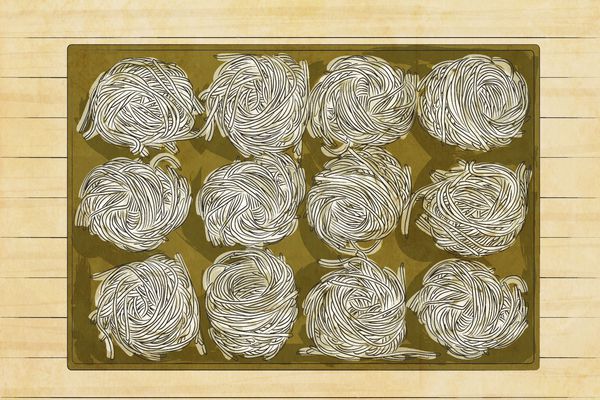 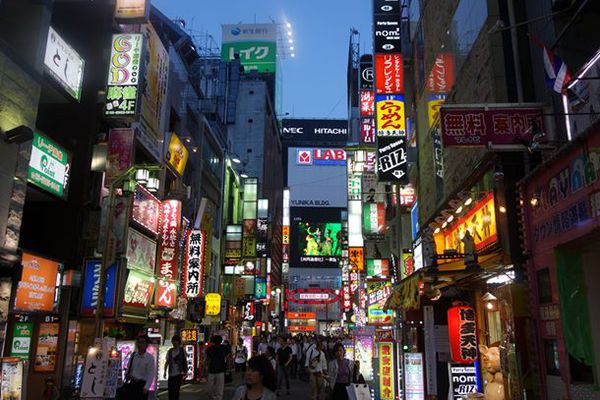 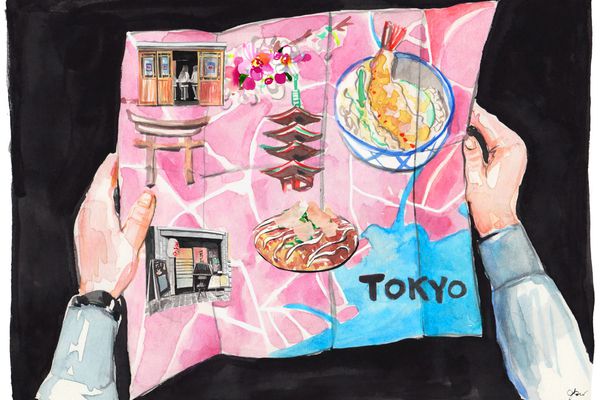 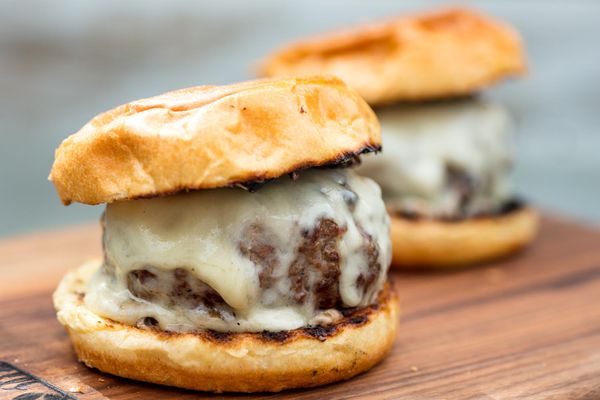 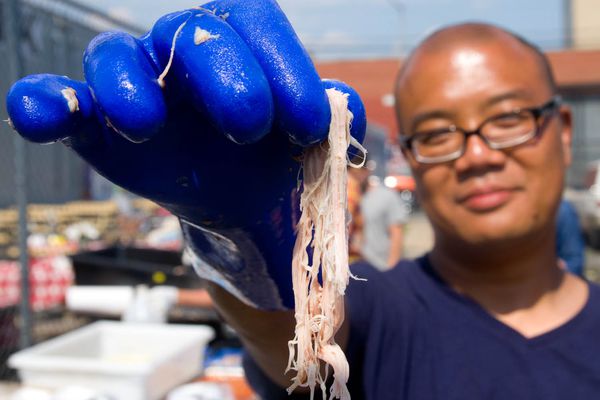