The little Mexican restaurant around the corner from my home makes a mean plate of nachos. They spread thick-cut, freshly fried corn chips in a single layer on a wide ceramic plate, top them with refried beans and cheese, then slide them under the broiler until the cheese is bubbly and melted and the edges of the chips are just starting to brown, giving off the characteristic toasted-corn aroma that separates the really great nachos from the great.*

*Let's face it: Even the worst nachos qualify as great.

Problem is, the family-run restaurant is one of those places that follow Douglas Adams's Bistromathics concept of recipriversexclusion: The times at which the restaurant opens and closes can be any time except for the opening and closing times actually posted on their front door.

This makes getting nachos on demand a crapshoot. Enter the microwave, the savior of my late-night nacho cravings. I just pop some chips on a plate, zap them for 30 seconds, top them with cheese, give them another go 'round the radiation merry-go-round, and knock 'em back.

In some circles, the suggestion that topping corn chips with cheese and putting them in the microwave can result in "nachos" is a heresy akin to stewing beef with beans and peppers and calling it chili or putting potatoes in your goulash.**

** I've since learned that anything you put in your goulash will brand you a heretic according to at least one person in the world.

But is it really that bad? Does the microwave do irreparable harm to your chips? I've read numerous claims as to what a microwave will do to you and your nachos:

That's a whole lot of potential ruin. Let's see if we can sort through it all.

First things first: I'm gonna go ahead and ignore the "microwaves are radiation that gives you cancer" comment, as well as the "microwaves destroy nutrients" claim, because, aside from the fact that they're demonstrably false, when I'm in the kind of mood where I'm in so much of a hurry that I can't be bothered to preheat an oven before shoving fried food and melted cheese down my gullet, cancer and nutrition are not at the top of my priority list.

That leaves us with the latter three potential sources of trouble.

I decided to test each of these factors—cheese meltability, chip crispness/staleness, and chip flavor—in a side-by-side competition, pitting the microwave against the conventional oven. I repeated the test using standard store-bought chips, chips freshly fried from my local Mexican market, and chips that I fried myself at home using store-bought fresh corn tortillas. My nachos were constructed in two ways: as individually topped Texas-style nachos (my favorite) and as a two-layer pile with cheese on top and in the middle.

As a science lover and seeker of truth, my first instinct was to conduct a series of large-scale, double-blind taste tests to get some real data. After I'd scanned around the war zone of a house in the midst of painting and remodeling, my follow-up instinct was to say, eh, screw it. For the sake of some semblance of scientific rigor, I did feed some test batches to my wife, who was unaware that she was the subject of a flavor experiment.

I focused on the three main problems.

Nachos are typically made with younger cheeses with a relatively high water content and loose protein structure, like jack, Longhorn, a young cheddar, or queso Oaxaca—cheeses that melt easily and are not prone to breaking. Luckily, high-moisture foods are virtually custom-made for the microwave, which works by causing water molecules within food to rapidly vibrate, creating friction and heat.

A conventional oven cooks only from the outside in. With individually topped nachos, this isn't an issue. The heat travels inward fast enough that the cheese can completely melt through before the outer layers start to dry out. With piled nachos, you run into a problem: Either the cheese on the top layer of nachos is dry and/or broken, or the cheese in the center layer is barely warmed through, cooling to a single congealed mass and forming the dreaded "cheese chain."***

*** Using our preferred technique of spreading the nachos across a wide sheet pan helps mitigate this.

Because microwaves have the ability to penetrate over an inch into the food, if you place a piece of cheese (or a pile of grated cheese) on a nacho in the microwave, it heats not just from the exterior, but from the inside as well, resulting in rapid, even melting. The only downside of using the microwave for melting cheese is that there's a very short window of time between melted-and-gooey and broken-and-greasy. Just a few extra seconds is enough to do it, so make sure to peer through the glass on the microwave door and pull the nachos out as soon as the cheese has melted.

Simply put, cheese melts more evenly and rapidly in a microwave than it does in the oven.

Some folks say that chips turn stale or soft when microwaved for nachos. I haven't ever found this to be the case, and, in fact, if you're using even slightly watery ingredients (say, loose refried beans or chili), the nachos that you bake in the oven actually get soggier, as they spend more time in contact with the moisture.

How would a myth like this get started? I'm honestly not sure. It's true that bread will turn stale or overly soft when microwaved. That's because the starch in wheat flour forms a crystalline structure that can be retrograded with heat. Put bread in a conventional oven and, once again, you're heating from the outside in: The crust will become tender-crisp first, followed by the interior. In a microwave, on the other hand, areas of higher moisture concentration will heat faster. That means that the center of a slice of bread will become overly soft before the crust has a chance to soften. The particular type of simultaneously tough and soggy texture in microwaved bread is a result of this.

This brings us to our third problem...

Here's a fact: If you put a plate of tortilla chips topped with cheese in the microwave and zap them until the cheese melts, the cheese will melt way before the tortilla chips have the chance to take on any color or toasted flavor. With nachos baked in the oven, the chips toast while the cheese melts. (Again, this is because microwaves selectively heat moist foods faster than dry foods.)

But there's a super-simple solution: Microwave the chips on their own first, then top them and microwave them a second time to melt the cheese. Microwaving bare chips for a brief period of time produces enough heat to actually toast them and improve their flavor.

Granted, the toasting pattern you get in the microwave (the thinnest sections tend to darken first) is not identical to the one you get from the oven (the edges darken first), but once they're in your mouth, it's difficult to taste a difference.

Is it worth it to microwave your nachos? Questions like this are never answered by a simple yes or no. It all depends on the frame of mind you're in. Think of it as a circuit in Mario Kart: When you've got a lot of tight turns and potential pitfalls ahead, you might want to let Yoshi do the driving, with his quick recovery from accidents and great handling. Lots of straightaways and gentle curves? Bowser's high top speed and bulk might come in handy.

Here's a spider chart to help you make the right decision:

As you can see, the oven edges out the microwave in flavor and texture, while the microwave takes a slight lead on the goo factor. The categories in which we see the largest differences are speed (a microwave is vastly faster than a conventional oven) and batch size (the microwave can only handle one plate of chips at a time, while the oven can handle a couple of trays).

Long story short: If you're feeding only yourself and perhaps a partner, and neither one of you is into the concept of waiting, the microwave will produce nachos that are just about as good as those baked in the oven. 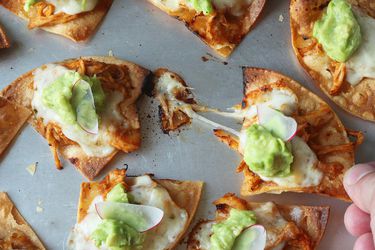 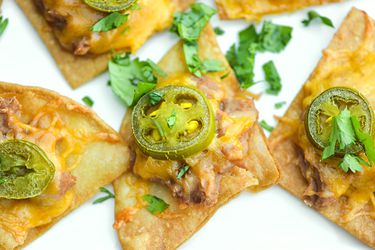 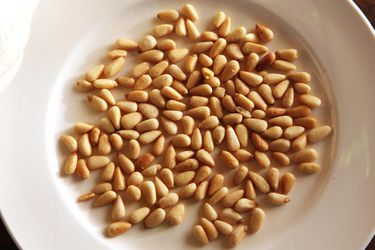 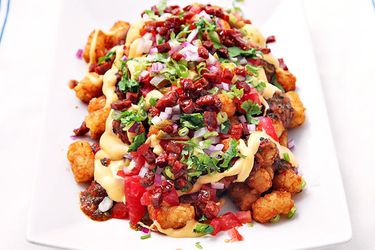 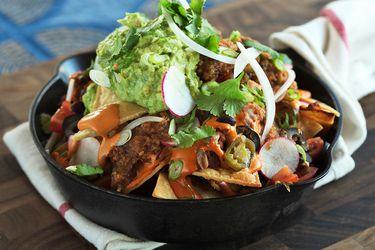 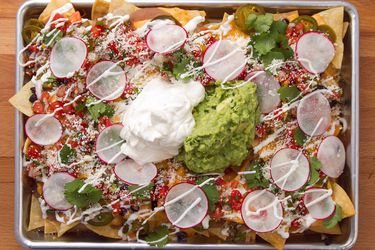 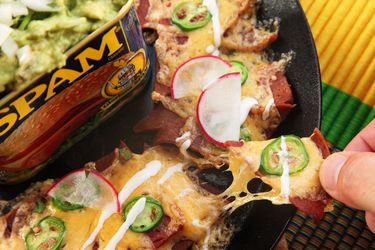 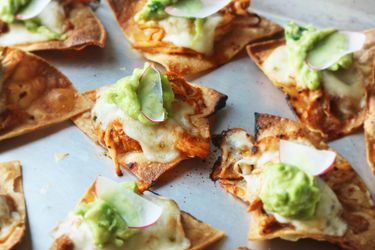 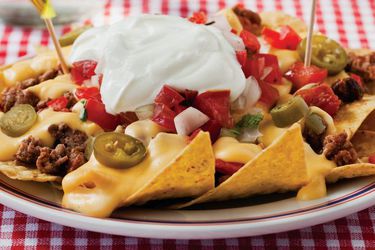 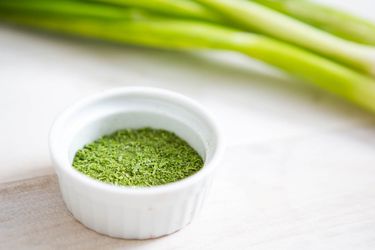