I may be one of the few Chinese people who isn't a big fan of congee. At least, not while I was growing up. As a kid, the sight of the Chinese rice porridge didn't instill me with the comfort of a mother's loving touch as it did with many of my friends (my mom never made congee; she wasn't a fan either), but made me think, "Aargh, what in the...[swishes rice grains in cloudy water]...why...what did the rice do to deserve this bland, watery grave? And what'd I do to deserve eating it?" (Considering all the congee I've eaten as an adult is much better than what I was exposed to in my childhood, I must've grown up with especially boring congee.)

But there was one thing about eating congee that I liked: topping it with pork floss, also known as meat floss and meal wool in English, and in Chinese called rousong. It's sort of like cotton candy—if cotton candy were made of dry, fluffy, finely shredded pork seasoned with soy sauce and sugar and looked like scraggly clumps of dryer lint. (You think "pork floss" sounds weird? How about "pork lint"?...yeah, that's not going to catch on.) Pork floss dissolves quickly at the wrath of saliva and teeth, but before it disappears it releases a wave of sweet, salty, and porky. Not a strong wave, although not subtle either. Think of it like fluffy pork jerky.

Pork floss is so cheap—I found four-ounce containers for $1.69 at a local Chinese supermarket (Hong Kong Supermarket for you New Yorkers)—that I can't imagine ever making it at home, but if you want to give it a go or can't find a place to buy it, here are some recipes from Chow Times and Umami. Basic steps? Cook pork, shred pork finely, combine shreds with seasonings, fry shreds over low heat until dry, The store-bought version usually contains pork, sugar, soy flour, soy sauce, lard, salt, and MSG.

There are two common kinds of pork floss: pork sung and pork fu. Wikipedia calls pork fu a variation of pork sung that's less fried and less shredded. As far as I can tell, they're almost the same. Out of the selection at my local Chinese grocery store where I found three brands that made pork sung and fu, two of the brands had identical ingredient lists for each kind, while in the third, pork fu was different for not having green pea flour.

The most noticeable difference visually is that pork fu has a lighter color. From my not-very-extensive research of eating pork sung and pork fu over and over again in succession, I'd say that pork fu, besides tasting less shredded and a tad less dry, is also not as seasoned as pork sung.

Another type I found was pork floss mixed with sesame seed and seaweed. Like pork floss deluxe.

Something I didn't find at the Chinese grocery store was crispy pork floss. Kenji's wife brought this jar back from Singapore. It's full of super dry, crunchy pork floss clumps.

How to Use Pork Floss

My boring self prefers to get my pork floss intake with plain white rice, but it's also used as a filling for sticky rice rolls, sandwiches, pancakes, tiny egg rolls, and onigiri, and as a topping for baked buns. Hell, you can use it to top loads of things: tofu, yam cake, noodles, pasta, toast (or swirled into bread), rice crackers, pizza (perhaps an idea some Slice-ers can look into)—you know, pretty much anything. The Serious Eats community has a plenty of suggestions for how to use pork floss in case you need inspiration.

For something more on the sweet side, pork floss may also be used as a sponge cake topping or filling. Behold the cake above: a double-layer triangular chunk of subtly sweet, airy sponge cake, layers bound by a barely-there layer of creamy frosting, with one face spread with mayo and coated with pork floss. Two great tastes in one? Eh. Although it didn't taste bad, each bite fueled my discontent—the combination of sponge cake and pork floss fulfilled neither my craving for sponge cake or for pork floss, nor did it give rise to a new flavor that exceeded the tastiness of its individual components. But other people like it, as seen in these pork floss cake variations and these recipes for pork floss Swiss roll cake and pork floss steamed cake.

Maybe if I had grown up with pork floss-topped cake, I'd like it more—which makes me wonder if someone who didn't grow up eating pork floss would be able to appreciate it in adulthood as much as I do. Just taking a whiff of pork floss takes me back to being a kid and excitedly sticking my hand in a 16-ounce jug of the lard-enhanced stuff.

Who else here loves pork floss? 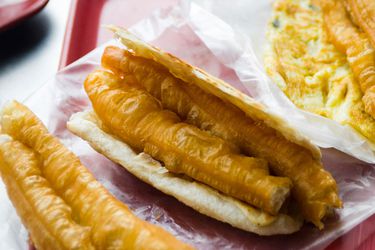 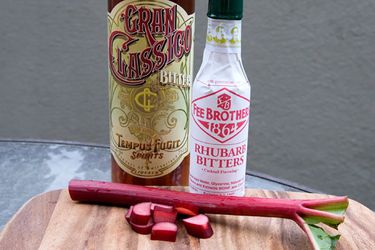 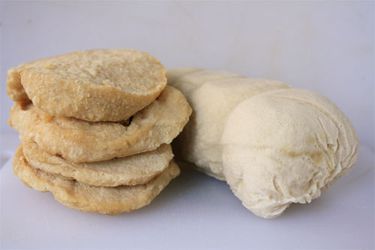 Seriously Asian: Why I'd Rather Eat Vegetarian Chicken than Mediocre Meat 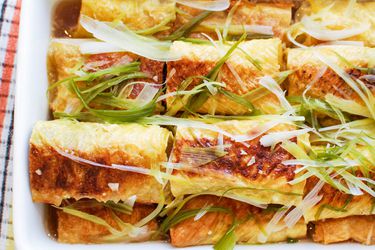