A pineapple ice cream that's light and fluffy, yet creamy, made with fresh pineapple for a vibrant flavor.

A few weeks ago at dinner, Sohla talked about the charms of growing up near Disneyland, where summers were flush with the cold, bright zing of a Dole Whip, a dairy-free pineapple-flavored soft-serve that’s been sold at the theme parks since 1986. I’m almost embarrassed to say I’ve never been to Disney, so I couldn’t share in her enthusiasm, but it certainly sparked a craving for pineapple ice cream.

Without brand loyalty or nostalgia to serve as my guide, I wound up basing my first experiments on my own Meyer lemon ice cream (which, in turn, was based on my creamy lime pie). Which is to say, it's a well-tested formula for making a mouth-puckeringly tart fruit custard—the fruit in this case being fresh pineapple purée.

Since canned pineapple has already been cooked as part of the canning process, its flavor isn't as fresh and vibrant, so a ripe pineapple is the only way to go. If you've never cleaned and trimmed a pineapple before, Kenji's straightforward tutorial will demystify the process. Plus, the pineapple core and scraps can be tossed with some sugar to make a fresh, no-cook pineapple syrup that's pure magic in summer cocktails.

With sweet and mellow pineapple, I found the ice cream needed more juice and less sugar than my lemony original, but the overall technique remains the same. It starts with plain or lightly toasted sugar and cornstarch, mixed in a saucier to break up the lumps, then whisked with eggs, pineapple purée, and a splash of lemon juice for balance.

From there, the custard is cooked over medium-low heat to gently warm the eggs. They're somewhat insulated by the sugar and pineapple, so it's not like cooking plain eggs over medium-low, and it's a little faster and less messy than traditional tempering (although there's nothing wrong with going that route if you prefer!).

Once the egg mixture feels warm, it can be cooked at a slightly higher temperature, so I bump the heat to medium and whisk gently but constantly until the custard starts to bubble. The idea is to keep the custard in motion so it can't scramble against the pan, so it's more about being vigilant than vigorous.

It's also important to have the right sort of whisk for the job. A balloon whisk is perfect for a saucier, but with a straight-sided pot, a ball whisk or a French whisk would be a better choice. (For more info, read my article on how to choose the right whisk.)

From the time it starts to bubble, the custard needs to be held at a boil for 30 seconds to ensure that the heat neutralizes a starch-dissolving enzyme found in egg yolks; otherwise, the ice cream base may turn thin and runny as it cools. After cooking, the thick custard base is strained through a nonreactive fine-mesh strainer to remove any stray pineapple fibers, bits of chalazae from the egg, or accidentally scrambled egg fragments (although, with the right whisk and technique, the risk of that is low).

To speed the cooling process, I add the cream at the very end, then doctor the base with rum and vanilla. Just a tablespoon of rum will coax out a richer pineapple flavor without contributing much overt rumminess of its own, but the ice cream can support a full ounce if you'd rather rock a softer ice cream with a rum-forward, daiquiri vibe.

Go easy on the vanilla—two or three drops (measured into the lid of the bottle, for safety's sake) is all it takes to boost the pineapple's floral aroma. Any more, and it will start veering into Creamsicle territory, with the vanilla softening the pineapple's acidity. It might make for a tasty variation, but it's certainly not the intended goal, so proceed with caution.

The finished ice cream base can be proactively cooled in an ice bath if you're in a hurry, or else passively cooled in the fridge. Our ice cream whisperer, Max Falkowitz, has explained before that ice cream base doesn't need to be chilled overnight. What's important is that it's no warmer than 40°F (4°C) before churning.

It's also vital that the freezer itself is set to 0°F (-18°C), or else the ice cream machine's canister won't be cold enough to do its job, creating an icy, low-volume product.

Of course, this isn't a concern for self-cooling machines (for more info, read about our top-rated ice cream machines), but a warmer freezer setting will result in ice cream with a gooey, half-frozen consistency after storage, so crank that dial down low!

Regardless of what machine you choose, let the ice cream churn until it's fluffy and pale.

If it isn't structured enough to gather in the dasher, it's not ready. Stopping at a milkshake-like consistency will only give you hard and icy results.

Once it's churned up light, transfer the pineapple ice cream to a chilled container. I often use empty yogurt tubs at home, but the ice cream will freeze faster (and be ready to scoop sooner) if spread into a shallow container, such as a chilled glass or ceramic loaf pan. How long it will take to freeze depends on the precise dimensions of the container, but you should budget around four hours.

The ice cream is tropical simplicity all on its own, fluffy and light, with a fresh, bright pineapple flavor that's almost like sorbet, but creamy enough to satisfy. If you do happen to make pineapple syrup with the leftover core, you're just a splash of club soda away from making a soda for a fizzy pineapple float, or whipping up a pineapple twist on Lemon Chantilly for a double-pineapple sundae.

Or, who knows—maybe you'll serve up a slice of pineapple hummingbird cake à la mode. 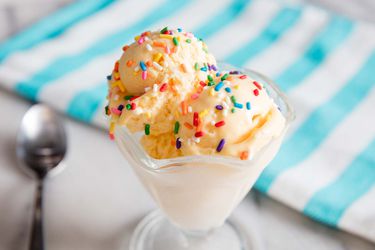