Morcilla with Potatoes and Paprika Recipe

How to cook the Spanish version of blood sausage.

The last time I made blood sausage, I stood by myself in my kitchen with one hand ladling a creamy blood mixture into casings supported by the other hand, thinking, why I am lading blood into intestines at two in the morning? Blood sausage—with its pudding-like texture of blood and fat, creamy in the center and crispy when browned in fat—is well worth the trouble if you can procure fresh blood.

If you're not in the mood for a blood hunt, you can find blood sausage at any number of butchers and purveyors of meat products. Like any kind of charcuterie, there are variants of blood sausage across many cultures and cuisines. Most are made with pork or beef blood, some contain a starchy filler such as rice or noodles, still others use vegetables like apples and onions to give body to the sausage.

The French version, boudin noir, is a mixture of blood, eggs, and cream and tastes especially pudding-like. It is richer than the Korean version soon dae, which uses sweet potato noodles and sweet glutinous rice as ingredients in the filling.

With so many different kinds of blood sausage, where to start? Morcilla, Spanish blood sausage that uses pork blood and fat, is one of the most widely available kinds here in the States. Morcilla is commonly made with onions or rice, though if you're lucky you'll come across links with pine nuts and almonds as well.

Morcilla is so good that the Spaniards are partial to frying it in olive oil and eating it as-is. Though you can cook the links whole, cutting them into sections exposes more surface area to be fried in oil. To do so, simply cut the links into sections and brown on both sides for a minute or so over low heat, until the surface of the blood sausage takes on a crusty texture from the oil.

There is something very Spanish about blood sausage in olive oil, which becomes infused with the taste of paprika and lard as it cooks. All that flavorful fat can be put to good use if you fry up some potatoes in your pan along with the sections of blood sausage, though it's also wonderful to have the sausage in a crusty loaf of bread.

Take care when browning the blood sausage, since the dark color of the sausage makes it deceptively easy to burn. 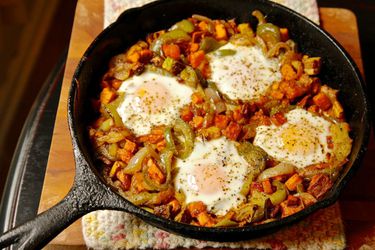