Moonshine's been called some pretty nasty names: Rotgut. Skullpop. Firewater. Panther Piss. Its name implies a liquor for which taxes have not been paid, produced by a bunch of good ol' boys under cover of darkness, by the light of the moon, then loaded into souped-up coupes and driven to customers along winding country roads. Think James Mitchum as moonshine runner Lucas Doolin in the 1958 cult classic Thunder Road.

It's this renegade reputation that fuels the liquor's allure. Often, moonshine's made with corn, though it can and has been made with anything that ferments, from grains like rye or wheat to plain old sugar. It's unaged and clear. Whiskey without the wood, it's called. Bourbon without the barrel. Go to a liquor store, pick up a bottle of moonshine and look closely at its label: Chances are it's either corn whisky (yes, spelled without the e) or neutral spirits—vodka, essentially. Some brands market their product as white whiskey—a more accurate descriptor than 'shine, perhaps, given that it's made by licensed, tax-paying distillers. Others stick with history, with heritage, with moonshine. It's a name with a story behind it.

But what is the story behind moonshine? Perhaps you've wondered: where did moonshine get its start? Is that stuff you've heard about moonshine's connection to NASCAR really true? I dug deeper into the story of moonshine for my recent book, Moonshine: A Cultural History of America's Infamous Liquor. Here are a few facts you might not know.

Moonshine's Not Just a Southern Thing

While moonshine is deeply rooted in Southern culture and heritage, its origins, in fact, can be traced to Pennsylvania. Farmer-distillers in the western part of the state protested when the federal government passed the distilled-spirits tax in 1791. They tarred and feathered tax collectors and fired upon their homes. These actions sparked the Whiskey Rebellion and nearly set off America's first civil war.

Moonshine production later took hold in big cities. In Brooklyn, the waterfront neighborhood known today as Vinegar Hill was a hotbed of illegal whiskey making. In 1869, law enforcement went hard and fast against the Irish immigrants who'd set up hidden distilleries there and refused to pay government taxes on their product. In a predawn raid they hacked up stills, confiscated whiskey, and hauled it back to the nearby Brooklyn Navy Yard. Of course, this didn't stop people from making booze. By the early 1900s, more moonshine was produced in New York City than in all the South combined.

During Prohibition, a one-day sweep in Chicago, in June, 1925, resulted in 50 raids, 320 arrests, and 10,000 gallons of seized liquor. According to the Chicago Daily Tribune, the Genna crime family had brought laborers over from Italy "to distill moonshine." Meanwhile, Prohibition agents in Los Angeles found inside a five-room ranch house a 250-gallon still and 800 gallons of mash, the soupy, fermented grain that's used to make the liquor. A story in the New York Times reported moonshine being made in San Francisco, Oregon, and Washington State.

Women Made Moonshine, Too.

You may think of moonshining as more of a man's world. But women were also making hooch. One of these women was "Nancy the Moonshiner." In the 1880s, people in Warren County, New Jersey, regarded her as an eccentric. What she really was, though, was a moneymaker and a hardscrabble businesswoman. At night she stole apples from an orchard near her home. She used them to make Jersey lightning, or apple jack, a distilled hard cider. When a government detective snuck into her hillside home near the Pequest River in hopes of apprehending her, Nancy knocked him out and took off running. She got away.

Nearly four decades later, in La Grange Park, Illinois, a Polish immigrant named Mary Wazeniak made and served moonshine out of her home, selling it to customers for fifteen cents a shot. When one man stumbled home at the end of the night, then fell into a bog and died, Wazeniak was arrested. The press called her "Moonshine Mary." She was the first woman to be convicted in Illinois for selling poisoned liquor.

Women were hauling moonshine, too. In Franklin County, Virginia, Willie Carter Sharpe was one of the most well-known whiskey trippers. Between 1927 and 1931 she transported by car, from distiller to customer, nearly 145,000 gallons of whiskey. During her testimony at the Moonshine Conspiracy Trial in 1935, she intrigued spectators with her diamond-studded teeth. She'd been arrested more than a dozen times in violation of the National Prohibition Act and did time at Alderson, the women's prison where Martha Stewart would be sentenced some 70 years later.

NASCAR Really Does Have Moonshine Roots.

Whiskey trippers knew how to handle an automobile like no one else. In their off time, many of them took to racing each other. Lloyd Seay was one of those drivers, a rising star in stock-car auto racing. But his career was cut short, in 1941, when he was shot dead by his cousin in a dispute over moonshine.

After Seay's death, another one of his cousins, Georgia moonshiner Raymond Parks, gave seed money to NASCAR founder Bill France to help him get his sporting organization off the ground. His mechanic, Louis Jerome "Red" Vogt, was at France's Daytona Beach planning meeting, in 1947, where he suggested the NASCAR name (National Association of Stock Car Auto Racing). Vogt serviced NASCAR vehicle for years, and customized engines for whiskey trippers based on road conditions of their most-traveled routes.

Perhaps NASCAR's most well-known link to moonshining, though, is Junior Johnson. He got his start in the whiskey business when he was 14 years old, hauling his dad's moonshine from the family home in North Carolina to customers throughout the region--and outrunning the revenue agents who gave chase. Johnson's skill behind the wheel translated to success at the racetrack. Early in his NASCAR career he won big at the Altamont-Schenectady Fairgrounds, in upstate New York. Afterward, he drove straight home to Wilkes County where he was arrested the next morning for firing up his father's stills. He served 11 months in federal prison. When he got out he went right back to the two things he knew best: racing and moonshining. Ronald Reagan pardoned Johnson for his moonshining conviction in 1986. In 2010, the racing legend was among the inaugural class of inductees to the NASCAR Hall of Fame.

What you've heard is true: Back in the day, moonshine really could make a person go blind. Unscrupulous production was the culprit. For example, some illicit distillers added lye to their product to speed fermentation. Others used car radiators to make their moonshine, which can result in lead leaching into the product and building up in a drinker's body. The problem was so bad that in the 1960s, as part of its Poison Moonshine Publicity Program, the federal government enlisted Louis Armstrong to record radio spots to help spread the word about the health hazards of backwoods booze. "That junk will blind, paralyze, and eventually kill you, friends," he said.

Luckily, you can now get a taste of moonshine history without risking your health. The brands recommended here are made with care on licensed stills. Each pays tribute to the moonshine tradition. Better still, one's from a woman-owned distillery, one's made in Brooklyn (not the South!), and one's from a NASCAR superstar.

At the Dawsonville Moonshine Distillery in Georgia, corn whiskey's made from a 150-year-old recipe passed down from an overall-wearing moonshiner by the name of Simmie Free. His granddaughter, Cheryl Wood, opened the north Georgia distillery in 2012, turning an illegal family business legit. Use Wood's moonshine instead of vodka to put a country spin on Sex on the Beach. She calls her version of the classic cocktail "Bangin' in the Woods." I prefer to sip it neat, and slowly—this stuff packs a punch! It's got a nice caramel scent, and a taste like cornbread in a jar.

Located inside the Brooklyn Navy Yard, Kings County Distillery was New York City's first legal distillery since Prohibition. Founder Colin Spoelman's a Kentucky native. Before opening KCD, he and business partner David Haskell made moonshine in their apartment. This year, the distillery's moonshine, made from a blend of organic New York State corn and Scottish malted barley, won gold in the American Distilling Institute's 8th annual Craft American Spirits awards. The liquor has a nice sweetness to it, and it feels smooth on the palate. Give that a go, then move on to the distillery's chocolate whiskey. I know. It's not in any way traditional. But it's moonshine infused with cacao bean husks; it's like boozy liquid dark chocolate.

It took him years to do it, but NASCAR legend Junior Johnson finally took his dad's moonshine recipe and put it on the market legally. It's called Junior Johnson's Midnight Moon, and unlike Dawsonville or King's County moonshine, Midnight Moon has national distribution, which makes it easy to lay your hands on a bottle. Heck, you can buy it at Costco. Try the original Mason-jar-packaged flavor, or branch out to the Apple Pie, an Appalachian favorite blended with apple juice and cinnamon sticks. The latter really does taste like dessert—with a kick—a real treat for the cool fall nights ahead. 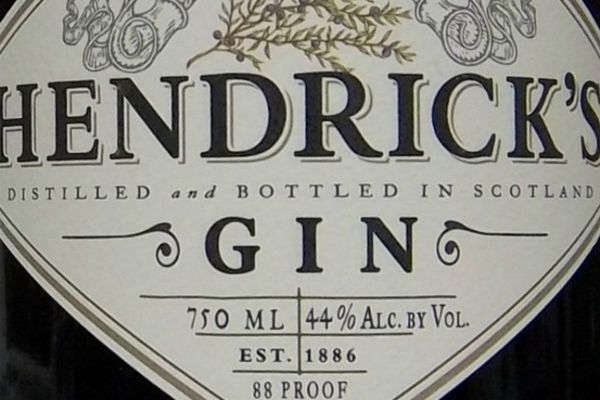 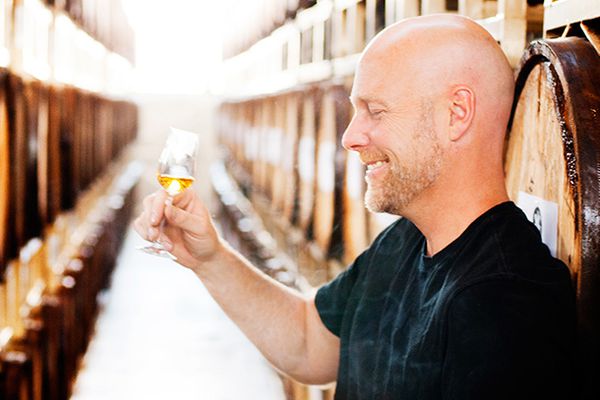 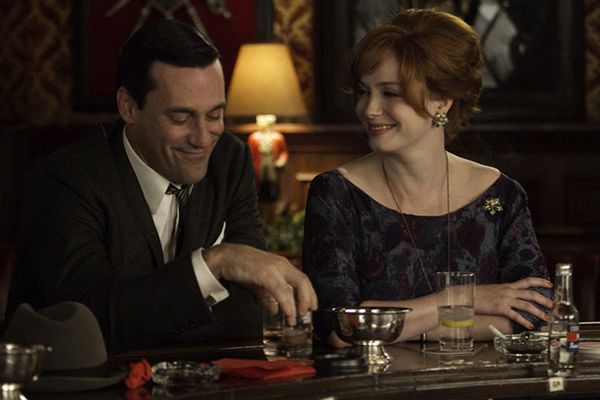 What Are They Drinking on Mad Men? 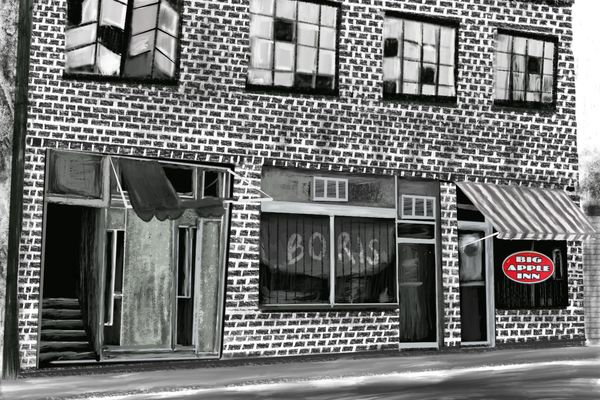