A tender cake of black-eyed peas that can be steamed in ramekins or packages formed out of sturdy moin moin leaves.

Moin moin, or moi moi, is a steamed Nigerian dish made of puréed seasoned black-eyed peas. If you’ve had crunchy, fried akara, moin moin is its soft and tender steamed sibling; both rely on a base of skinned peas. Moin moin is steamed in a variety of vessels including special aluminum cups with flat saucers for lids, ramekins, repurposed evaporated milk tins, and in moin moin leaves, the sturdy leaves of the Thaumatococcus daniellii plant (ewe eran in Yoruba and uma leaves in Igbo), which impart a sweet flavor and a light vegetal aroma.

The peas are prepared in an identical manner to akara. They are first soaked to soften the skins and help separate them from the rest of the bean. Then, they’re briefly pulsed in a blender to roughly break up the peas, which makes the final removal of the skins even easier. At this point, the peas are soaked a second time to soften them further and then fully blended with onions, peppers, water or stock, and sometimes oil to form a bean purée.

Moin moin is typically formed into its signature pyramid shape by wrapping the filling in moin moin leaves. This can be a tricky assembly process to learn at first, as the uncooked purée is loose. My instructions in the recipe show how to properly form the moi moi using leaves, but I also include an easier method of simply steaming the moi moi in ramekins, which can then be served in the cups or unmolded onto a plate. If you do use the leaf wrappers, you can serve them in the leaves on a plate. While most of the filling stays in the center, some of it inevitably escapes and becomes trapped in between the folds of the leaves; those trapped bits are the most delicious bites.

Served at a range of temperatures from hot to room temperature, moin moin is great on its own, plain or with add-ins like boiled eggs, canned fish like tuna or sardines, corned beef, and vegetables like carrots and bell peppers. It makes for a popular breakfast, served with sweet milky pap (fermented cornstarch), sweet custard, or oatmeal. Additionally, it’s often paired with rice; some of the best celebrations and parties will serve up plates of jollof rice, moin moin, salad, and dodo.

If you like, you can mix 1 cup total (by volume) of drained canned tuna, canned corned beef, cooked diced vegetables like carrots, green beans, bell pepper, and corn, or raw prawns into the batter.

Moin moin leaves are available fresh and frozen at African markets and online. You can substitute with banana or plantain leaves, cut into 8-inch by 12-inch rectangles. Be sure to heat the leaves first to prevent them from splitting across the ribs.

Stored in an airtight container, moin moin kept in leaves or ramekins can be refrigerated for up to 1 week or frozen for up to 1 month.

To reheat moin moin, refer to Step 6 for moin moin in leaves or Step 13 for moin moin in ramekins for steaming instructions. Arrange moin moin in pot, cover, and bring to a boil over high heat. Reduce heat to medium-low heat and cook until completely warmed through, about 10 minutes if refrigerated or 18 minutes if frozen. 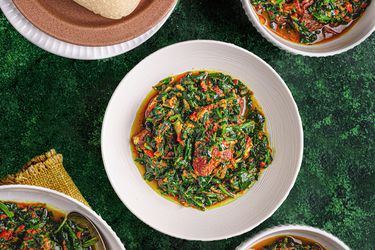 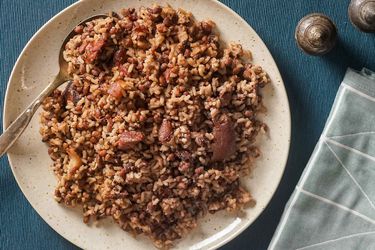