Fiona Reilly
Fiona Reilly is a freelance writer and photographer passionate about food and travel in China.
Learn about Serious Eats' Editorial Process

This Sunday, people around the world will celebrate China's Mid-Autumn Festival, or zhong qiu jie. As the last days of late summer fade and the leaves on the chestnut trees begin to turn a golden brown, families come together in the cool, crisp air to enjoy a feast under the glow of the full moon. Red lanterns strung with riddles dance in tree branches while the sweet fragrance of osmanthus flowers wafts through the evening air.

If all that sounds dizzyingly picturesque, then you have the right idea.

The evening's dishes emphasize the bounty of fall's harvest—pumpkin, chestnuts, taro, persimmons, sweet potato, walnuts, and mushrooms figure centrally in most meals along with traditional celebratory foods like crab, pork, and duck. Feasts also heavily feature round foods like mooncakes, a nod to the full moon's representation of unity and togetherness for families. In addition to Chinese New Year, the Mid-Autumn Festival is an important time for families to be reunited, much like Thanksgiving in the United States.

In Shanghai, no fall celebration would be complete without crisp, savory Suzhou-style mooncakes, baskets of steamed crab, and sweet red dates stuffed with sticky rice in a fragrant osmanthus blossom syrup. Here's a look at some of the region's most iconic Mid-Autumn Festival dishes and how to make them at home, no matter where you are.

This simple one-pot dish embraces the fall arrival of mushrooms and sweet, tender chestnuts. You can use any seasonal variety of mushroom, like enoki, shiitake, Swiss browns, chanterelles, or even cremini—finding high-quality, fresh mushrooms should be your priority. Once your ingredients are in hand, the process is quick. I start by blanching the chestnuts and mushrooms until they're tender, cutting back on the amount of time they need to be stir-fried. This ensures that they don't burn before they're cooked through.

While the vegetables drain, I heat oil in a wok and stir-fry ginger, garlic, and scallions until they're aromatic. Next, I add the mushrooms and chestnuts, briefly cooking them before adding a mixture of dark and light soy sauces. Then, toward the end of cooking, I stir in a cornflour slurry to add body to the savory sauce; the result is a silky glaze that coats the vegetables without overpowering them. A finishing dash of sesame oil adds a nutty undertone that offsets the salty intensity of the soy sauce. But don't eat too much! We're just getting started.

Get the recipe for Soy-Braised Fall Mushrooms With Chestnuts »

In China, pork symbolizes abundance and wealth, so it's no surprise that it makes its way into virtually every celebratory meal. This sweet, glossy pork belly is "red-cooked," a Shanghainese braising technique that involves coating food—typically meat—in a sticky reduction.

I begin by par-cooking the belly in boiling water for several minutes to give it a firm shape. Then I cut it into cubes and stir it into a syrupy stovetop caramel seasoned with ginger, garlic, star anise, and cinnamon. The combination gets a splash of water and Shaoxing wine before gently simmering for two to three hours until the pork is meltingly tender and the sauce has darkened into a deep red salty-sweet glaze. I recommend eating it with steamed rice and a vegetable dish—the sauce may be delicious, but it's also insanely heavy and rich.

Get the recipe for Shanghainese Sticky Red-Cooked Pork Belly »

In Shanghai, the arrival of fall signals the start of the much-anticipated hairy crab season. These small crabs, with their hairy mittens, have a rich, sweet flesh and roe. Unfortunately, hairy crab is also considered an environmental pest in the USA; unless you have a special source for the real deal, you can substitute it with any small fresh or saltwater crab—the cooking method will remain roughly the same.

The crabs themselves require minimal preparation. At most, you'll want to give them a quick scrub before steaming them in baskets, and they cook in under ten minutes. Once they're ready, served them alongside glasses of gently warmed Shaoxing wine and a dipping sauce of dark, funky Chinkiang vinegar mixed with brown sugar and ginger. It's a warming dish that captures sweet, sour, and briny flavors all at once.

Get the recipe for Steamed Crab With Chinkiang Vinegar and Ginger »

The wok is a fast and easy way to cook any leafy green, from the bok choy I use here to gai lan, Chinese spinach, or amaranth (check out our full guide to Chinese greens). In everyday Chinese home cooking, vegetable dishes far outnumber meat dishes. But for a feast such as this one, where meat far outweighs vegetables, the greens are a crucial fresh counterpoint to the richness of the pork, crab, and cakes. That's why I opted to do very little to the bok choy—they're simply sliced and stir-fried with scallions, garlic, and ginger. A finishing dash of salt, sugar, and sesame oil enhances the bok choy's natural vegetal flavor without overpowering it.

Get the recipe for Stir-Fried Seasonal Green Vegetables »

The Mid-Autumn Festival and mooncakes go hand-in-hand. Unfortunately, mooncakes also have a (largely deserved) reputation for being exceedingly difficult to make and, shall we say, less than mind-blowingly delicious. Luckily, these Suzhou-style mooncakes are a decided exception on both fronts. While the laminated pastry dough takes a bit of patience—you'll have to fold, roll out, and chill the dough several times before it's ready to be filled—the results are well worth it: crisp, flaky pastries filled with a richly savory ground pork filling.

The filling itself is seasoned with ginger, scallions, salt, and pepper, along with nutty sesame oil and Shaoxing wine. Once the dough is ready, I punch out circles with a cookie cutter, roll them out, and pleat each disk around a tablespoon of filling, much like a soup dumpling. With a light brushing of egg wash, they bake into glossy golden-brown cakes in just 20 minutes. Even better, they store well—if you're planning a big party, you can make them up to three days in advance and reheat them in the oven to serve. Then again, nobody will tell if you just enjoy them as a light meal or snack all on their own.

Get the recipe for Suzhou Savory Pork Mooncakes »

Walk through any Chinese garden in autumn and you'll immediately catch the delicate, fragrant scent of osmanthus blossoms: tiny cream or yellow flowers on shrubs with glossy dark green leaves. The blossoms are edible and used in Chinese teas and infusions where they add a pleasantly sweet floral-herbal aroma.

This traditional Shanghai dish celebrates the fragrance of those flowers along with the deep honey sweetness of red dates (also known as jujubes). Served hot, each date bursts with a soft core of sticky rice, drenched in osmanthus-infused syrup.

The syrup itself is a simple infusion of the dried blossoms, which you should able to find in most Chinese grocery stores, tea shops, or online. Similarly, red dates are available at many Asian specialty food stores.

To make the dish, I simmer the dates until they're tender and then split them open with scissors to remove the center pit, like so:

Then I make a quick dough of glutinous rice flour and water, pinching off pieces and rolling them into cylinders to stuff inside the dates. The size of each piece will depend on the size of the date; you want it to fill the fruit but not prevent it from holding its original shape.

A quick simmer later, and they're ready to go—just pour on the syrup and serve.

Get the recipe for Red Dates With Warm Osmanthus Blossom Syrup »

Molded decorative mooncakes are the defining food of the Mid-Autumn Festival. The burnished golden pastries hide fillings like salted duck yolk surrounded by mung bean paste, lotus paste, or red bean. But let's be frank: nobody actually eats them, mainly because they're made in factories and often several months old by the time they're purchased. Typically, the giving of mooncakes is less about flavor and more about the relationship between the giver and the recipient: an "I value our personal/business relationship, therefore, I'm giving you these over-packaged and very expensive mooncakes to demonstrate how highly I think of you" kind of deal.

But here's the thing: homemade mooncakes? They're amazing. Yes, they're big on effort, but they're also incredibly rewarding, whether you're devouring them yourself or gifting them to show someone just how much you really care. Here, a non-traditional walnut spice filling is surrounded by sweet red bean paste for a layered appearance and maximum flavor.

To make proper mooncakes, you'll need a mold. Molds are available in various sizes and depths; for my recipe, I use a traditional large wooden mold with a 130-gram volume. But a plastic-press mold in a similar size will do you just fine—you can get a set of different imprints for a relatively low price online.

The key to making mooncakes is to assemble each ball in layers. In my recipe, the innermost sphere is made from walnut paste seasoned with Chinese five-spice powder, sugar, and cinnamon. The second layer is made of red bean paste, which is lastly wrapped in a layer of pastry. That sphere is then pressed into a lightly floured mold and carefully tapped out onto parchment paper.

It's crucial to follow the cooking instructions carefully for good results. To prevent cracking, splitting, or complete collapse, I begin by baking them on high heat to set the pattern and shape of the cake. Then I cook the mooncakes in short increments, removing them regularly to brush the surface with egg wash and let them cool, helping to preserve their shape and consistency. Do it right and you have a showstopping dessert to complete your meal.

Just look at those beauties! Not bad, right? 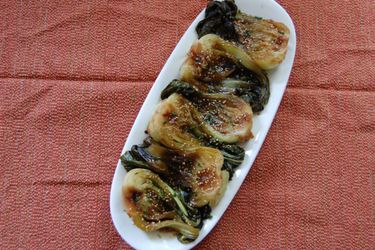 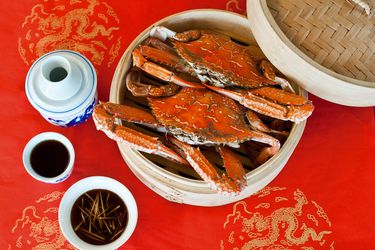 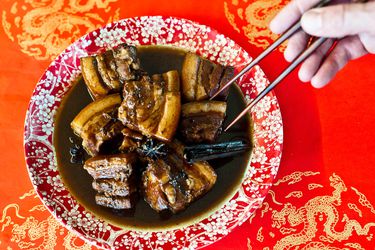 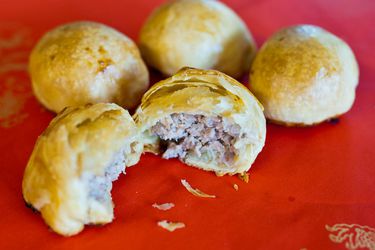