Soup weather has officially arrived here in New York City, and I couldn't be more overjoyed. I think many people consider soup easy to make because it's not a super precise process (got an extra carrot? chuck it in), and it's also very forgiving (forgot to season in the beginning? it's not a tragedy if you do it at the end). I love making soup, too, but I view it as a challenge: I want to layer in as much flavor as possible, and that involves a little bit more effort than just throwing vegetables in a pot and covering them with water.

One of the most effective ways to pack extra flavor and savoriness into a soup is to take the extra step of roasting your vegetables before adding them to the pot. Now, I'll take any kind of deeply-browned, oven-roasted vegetable, but I think my very favorite is cauliflower: the high heat brings a touch of bitterness to this otherwise sweet, mellow vegetable. And though I love the creaminess of a puréed cauliflower soup, sometimes it can be just a bit bland.

This preparation maintains that irresistible creaminess, but adds a surprising depth of flavor—a wallop of umami that's only amplified by a crispy, crunchy sprinkling of bacon bits on top. To keep the soup from veering into too-rich territory, I add a drizzle of bright herbal parsley oil at the very end: it's tasty, and pretty, too. 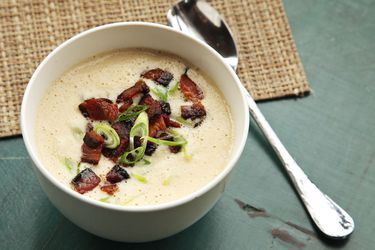 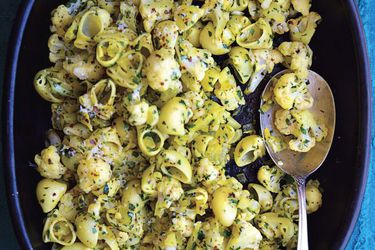