Massaman curry is an excellent example of the debt Thai cuisine has to foreign influence. It shows how well fresh Thai ingredients, like lemongrass, go together with the dry spices more commonly used in Middle Eastern and South-Asian cooking, like cardamom and cumin. The result is the definition of comfort food, a hearty dish of braised beef and potatoes that is deeply satisfying and compels you to return for bite after bite. It's got a bit of everything—complexity from the combination of spices in the curry paste, richness from both the coconut milk and the beef fat, and it has that three-flavor punch of sour, sweet, and salty from the additions of tamarind, palm sugar, and fish sauce. You'll fall in love with this curry.

The use of dried spices in Thailand dates back as far as the 17th century, when there were close ties between Muslim merchants from Persia and the aristocracy. Dr. Hanuman Aspler, a scholar of Thai food and one of my mentors, theorizes that massaman could either have originated with these merchants in the 17th century or in Thai-Muslim communities as late as the 18th century. Aspler notes that some of the earliest historical records of massaman curries date back to 1889, and observes that those recipes were written by Thais who married into the Bunnag family, a powerful Siamese noble family established by Sheikh Ahmad Qomi, an influential, Persian-born Siamese court official. One of the most notable members of that family was Lady Plean Passakornrawong, who wrote the enormously influential cookbook Maae Khruaa Huaa Bpaa in 1908.

Old cookbooks like Lady Plean's are cultural treasures, and unlocking their knowledge is one of the primary motivations for my study of the Thai language; this recipe for massaman curry, like many, many others, is heavily influenced by Lady Plean's work.

Although the sauce in many massaman curries is emulsified to produce an almost smoothie-like texture, I prefer the curries that have higher quantities of fat, which encourages the oil to separate from the rest of the liquid in the sauce; a curry that isn't emulsified will create a dynamic eating experience, with the dried spices producing a kind of cooling effect in the back of the throat.

The thickness of the sauce varies quite a bit, too. It can be almost gravy-like in some preparations, whereas others will have a sauce that's on the thinner side. Both pair well with jasmine rice or roti; the latter is often alongside massaman curries served by Thai-Muslim vendors. This curry is on the thicker side, but if you'd like a thinner curry, you can add more stock or coconut milk to the recipe.

In keeping with Thai-Muslim tradition, where meat is often seared in fat or ghee, I brown boneless beef short ribs in a Dutch oven before covering them with water and braising them until just tender. The braising process provides two beefy byproducts that are also used for making the final curry: rendered fat that I use to fry the curry paste, and a light stock that I use to cook the potatoes and bring the finished curry together.

The cooking process of massaman is much like other coconut-based Thai curries. I start by cooking the curry paste—toasted spices and chiles and roasted aromatics and shrimp paste all pounded together in a mortar and pestle—in a combination of coconut milk and reserved rendered beef fat from the braise until the mixture "cracks," or the water is cooked off and the fat separates, and the curry paste starts to fry, coaxing out the aromas of the smoky and warm spices and aromatics. I then season the mixture with fish sauce, tamarind, and palm sugar, and simmer it with the cooked beef, reserved braising liquid, and Yukon gold potatoes to make a rich, saucy curry.

This dish can be served as part of a larger Thai meal, and pairs well with cooked jasmine rice, acidic salads such as yam khai dao or a stir-fry like galam plee pad nam pla (stir-fried cabbage with fish sauce and garlic).

For the Beef Braise:

The short ribs can be braised a day in advance; refrigerate them whole in their cooking liquid. The finished short rib curry can be refrigerated in an airtight container for up to 3 days. Reheat gently on stovetop before serving. It is often assumed that curries, stews, and braises taste better the next day, but as we have covered, this is not always the case, especially with bright and acidic stews that lose their punch over time. While this flavor-muting phenomenon can be an issue for other Thai curries, this massaman curry tastes just as good the next day. 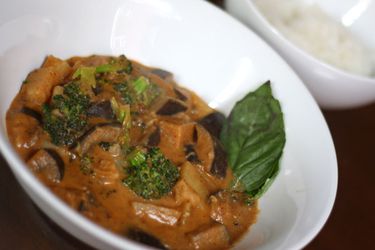 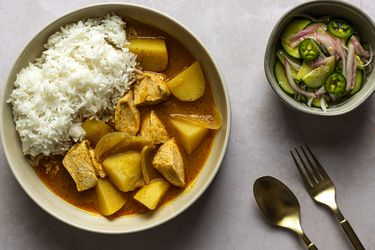 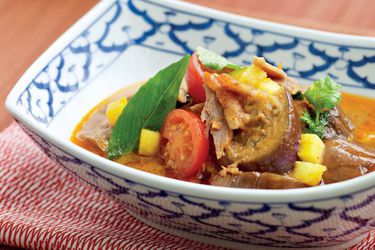