While Mexico City's sprawling La Merced market can fulfill on almost all common goods for Mexican cooking, in contrast, Mercado San Juan delivers on just about everything else. For what it lacks in scale, Mercado San Juan makes up in diversity. It still has the ubiquitous bins of chiles and mole pastes, but they seem to be placed there only by default as each stall in the market truly amazes with its gems of delicacies, the unusual, and the rare.

Greeting me at the entrance of the market was a tub of live maguey worms—caterpillars that make residence in agave plants—and a seller with a challenging smile pushing them as a quick snack to be eaten as is. While passing on that offer, I was quickly made another for chapulines (dried Oaxaca grasshoppers), escamole (ant eggs), and chicatanas (flying ants).

Journeying past the insects, the market opened up into an oasis of meat. There were rabbits, ducks, and suckling pigs by the dozens lined up on the shelves on proud display. Beef and pork were waiting to be butchered into any cut, and leaving nothing to waste, brains, livers, sweetbreads, and intestines all found their places alongside the rest of the animal.

The meat corridor then gave way to stall after stall of seafood overflowing their ice-packed displays. Fish ranged from the common, like mahi mahi and red snapper, to the more local, like pejelagarto. Strolling down the walkway, bins of octopus to goose barnacles passed by my feet, and while I stopped to marvel at some exceptionally large shrimp, a vendor pulled me over to show off his prized two prized lobsters.

Fruits and vegetables were no exception to exotic and fantastic. Distinctive and delectable morels first caught my eye, but I ultimately became more transfixed by the packages of huitlacoche—a corn fungus that can be stuffed into tacos or quesadillas—that sat nearby. Piles of bok choy and daikons, along with cabinets of Chinese groceries behind glass, seemed out of place, but represented Mexico City's small Asian population.

A nod to the market's Spanish origins, there were also stalls of cured hams, wines, and cheeses. A Mexican-made aged fontina was particularly delicious, with a rich and creamy texture and a slight nutty bite that had me asking for seconds.

Mercado San Juan is a feast for the eyes and its smaller size makes it more manageable for tourists than the maze of a market that is La Merced. Located just under a mile west of the main square in the historic district of Mexico City, it's worth checking out and chatting with the vendors, who seem all too eager to tell you about all of the interesting and amazing food they're selling. 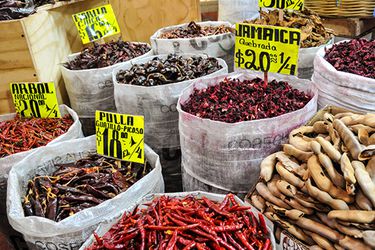