With an aunt-in-law in town and concerts and a circus to entertain her with, I found myself near Lincoln Center around dinner time several times last week and managed to eat my way through most of the menu at American Table Cafe and Bar, Marcus Samuelsson's new casual cafeteria inside the Diller Scofidio + Renfro-designed lobby of Alice Tully Hall. Those familiar with the space will realize that the "renovation" mostly involved adding furniture (including some plastic cushions attached to the outdoor concrete amphitheater), changing the lighting, and... well that's about it.

It's a minor change, but one that works. The space feels intimate and comfortable without being stuffy, casual without being classless. It's the kind of place you want to go when you have an hour to kill before a show and forgot to make reservations (or don't want to spend the bucks) at Bar Boulud or Boulud Sud across the street. It uses the Fuddrucker's fast-casual ordering model: you go and order from the counter (look for the iPads whose sole purpose are to display "Order Here" as their batteries slowly run down), but a real live waiter will deliver and clear your food for you once you sit down.

There's no doubt that Samuelsson, whose Red Rooster continues to be packed nearly every night of the week (I know because I live a few blocks away and spend a good deal of time at its bar), knows how to throw together a compelling restaurant, but the American Table space throws a new hurdle his way: As far as I could see, the space has no kitchen.

That's right. All of the food served at American Table is pre-cooked and assembled on-site using a rag-tag collection of steam tables, panini presses, and sous-vide water baths—there is absolutely nothing cooked to order. What this means is that braised dishes, stews, soups, and pressed sandwiches form the backbone of the restaurant.

To the great credit of the menu created by Samuelsson and his fellow Swede-in-crime Nils Norén, I didn't even notice that this restriction existed until half way through my second visit when I had a "wait just a minute here..." moment while studying the menu.

It's amazing how much variety he coaxes out of those cooking and holding methods. Sandwiches run the gamut from BBQ Pork Sliders ($12), which don't taste anything like barbecue, but are nonetheless juicy and packed with porky flavor complemented by a crunchy apple slaw, to Country Ham Biscuits ($12), which again, don't taste like country ham (I could swear it was sliced city ham in there), but are tasty, with excellent tender, buttery biscuits.

Taco Doro Wat ($12) is an odd mish-mash of Ethiopian food served in a Mexican setting, but it works. The spiced chicken stew is robust enough that you could mistake it for pork, its juices barely contained by the corn tortillas it comes piled on top of along with fresh cheese and a crushed hard boiled egg.

My wife was particularly enamored with the coconut- and lime-scented Squash Soup ($8), gingery, aromatic, and soul-soothingly rich and velvety. The grilled cheese we decided to tack on for an extra $6 was a miss, however, with chunks of still-cold cheese in the center of some barely-toasted bread from the panini press.

If you've had any of Samuelsson's food, you'd know he has a good way with pickles, and the Pickled Onions, Cucumbers, and Carrots ($5) are perfect for snacking on while you sip on their short list of strong, well-crafted cocktails (all $13). The Penny Arcade is a vanilla-scented twist on the Sazerac served on the rocks, while the Minuet is a maraschino-less Aviation that goes down just a little too easy if you want to stay awake and alert during the concert.

No Samuelsson venture would be complete without some version of his Meatballs ($12). While the ones served at Red Rooster are porky and rich, American Tables' meatballs go the turkey route, with a decidedly more meatloaf-like texture—tender and flavorful. In place of lingonberry jam, you get a swipe of cranberry sauce along with some excellent pickled red cabbage and a saucerful of mushroom gravy. I wasn't sure whether it was meant for dipping or eating with a spoon, but pouring it over the sandwich seemed to work just fine. This is a big sandwich that'll require you to resorting to a fork, if you don't want to soil your concert-going attire.

My wife gave a visible start when the largest Lobster Roll ($19) we've ever seen arrived at the table, but we quickly discovered that it was an average amount of lobster in an oversized bun propped up with shredded lettuce. While fried shallots and a mustardy dressing were an interesting and not at all unpleasant twist on the classic cold lobster salad, we both dearly missed the sweet, butter-toasted bun that is as essential to a great lobster roll as the lobster itself.

Instead, we all consoled ourselves by fighting over the Braised Short Ribs ($18), which were amongst the best I've had anywhere, steam table or no. Meltingly tender and rich, cooked just so, and served on top of an insanely buttery, horseradish-scented rough purée of Yukon gold potatoes.

For a short menu, there's a surprisingly large dessert section. Get the Spiced Bread Pudding ($6). Served with salted caramel and whipped cream, it's the kind of dessert that actually improves as it sits, slowly softening to a near pudding-like texture.

I can't lie to you: American Table is not the kind of place you need to go out of your way to experience. But as a quick, inexpensive, and very tasty alternative to the otherwise slim pickin's around Lincoln Center? It'll more than tide you over to curtain call.

See all the dishes in the slideshow » 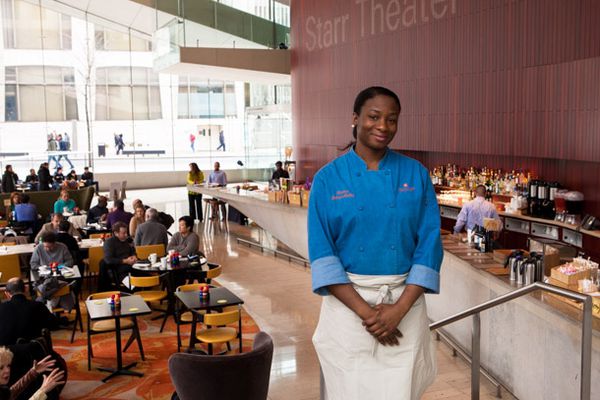