When Ed Levine first tasted Scott Conant's spaghetti with tomato and basil at Scarpetta, it was love at first bite. And he was hardly the only diner so enamored. While Scott Conant's trattoria has been widely acclaimed for its sophisticated Italian fare—black maccheroni with sea urchin, roasted capretto—it is the simplest of dishes that has become his trademark.

Perhaps we should say, simplest-seeming. There's more than ripe tomatoes and properly salted water to this dish. But at the New York Culinary Experience this weekend, Conant divulged his secrets and taught us all to replicate his signature pasta—no flashy technique, exotic spices, or kitchen wizardry required. Just a few unexpected ingredients and a respect for the process.

How to make it? The photo tutorial, after the jump.

The pasta. Dried is fine, particularly some of the better imported brands, like Conant's favorite: Pasta d'Gragnano, from just outside Naples.

The tomatoes. Fresh is best, and if you're lucky enough to come across a perfectly ripe plum tomato haul, don't let a can anywhere near your sauce. But if your tomatoes aren't quite up to par, supplement a base of mostly fresh tomatoes with a few high-quality canned San Marzanos.

After you've peeled and seeded, split the tomatoes and scoop out the seeds, reserving the seedy liquid; it'll come in later. How do the tender tomatoes break down into sauce? Conant's secret: a potato masher. "I never saw anyone making mashed potatoes in my house," he said. "But we always had a potato masher. And that's how my mother and grandmother would make the tomato sauce."

Get a few tablespoons of extra virgin on the stove, and once the oil is very hot, but not smoking, add the tomatoes. And lots of salt. Then swoop in with the masher. This isn't a sauce that will cook all day; 45 minutes, at most. "My mom still cooks her sauce for 10 days," jokes Conant. "It's a pride thing. But it's not always the best way."

After a few more minutes at high heat, the sauce will start to bubble and foam.

If it's too thick, strain that seed-juice reserve and add the juices back to the pot.

Rather than adding flavors like basil and garlic to the sauce directly, Conant infuses an olive oil with these ingredients, adding that oil at the very end. "The last thing you add will be the first thing you taste," he explained. "I think that's profound."

Pour the oil over the garlic, chili, and basil, then place over a super-low heat. When it nears boiling point, perhaps 25 minutes later, remove from the heat; you don't want it too cook too much, just to coax the flavors out of the spices and into the oil.

All finished. Strain that oil, take your tomato sauce off the heat, and stir the oil in.

Now, to plate! Take a scoop of the sauce, and place it in a sauté pan. The surface area will allow the sauce to reduce a bit without the flavors concentrating more than you'd want.

The pasta. Cook spaghetti about 7/8 of the way to al dente, but stop there; scoop out, and add to the sauté pan.

Then add a small ladle of pasta water. The starch and salt in that water will help the sauce adhere to the pasta, making it thick and creamy, just as cooking starches help risotto to become so creamy.

Add the basil, and the cheese. And the secret ingredient? Butter—up to a tablespoon. Shake it up, toss it around, and cook just until the ingredients are incorporated.

Grab your tongs, pile onto a plate, and there you have it: Scott Conant's spaghetti with tomato and basil, just the way they make it at Scarpetta. A simple dish, done right.

Showing off his signature dish. 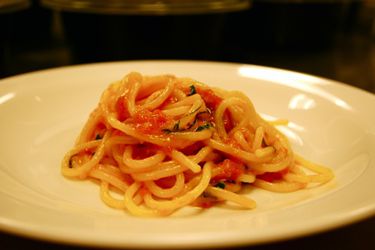 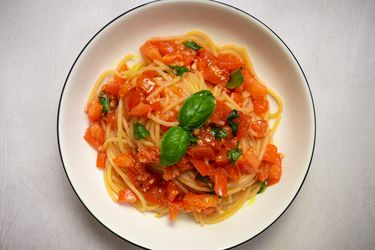 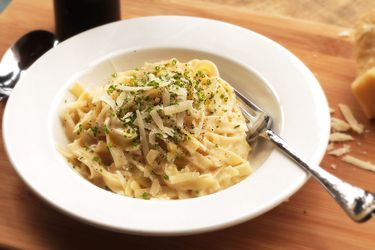 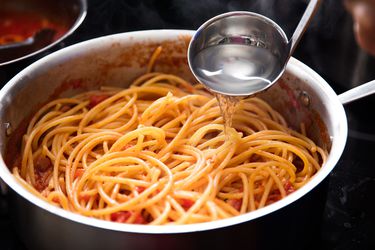