When really great bakers like brother Ron and Andrew Siegel decide to make the leap from bread to pizza, good things can happen.

Ron's been running the venerable When Pigs Fly bakery in Wells, Maine since 1993 (his brother joined him a year later). They've since moved locations to their current expansive digs in York and have increased their output 150 times from 80 loaves a day to over 12,000, but they still use pretty much the same process. Natural leaveners, freshly milled flour, fresh vegetables and other flavorings make for excellent crusty, bread with a moderately open-textured crumb and a good amount of chew.

As a former chef, it was always in Ron's plan to open a full-fledged restaurant. This past summer, the restaurant finally opened its doors. Attached to the bakery, it's a vast, open, but friendly space with an excellent selection of beers on tap, two wood-fired pizza ovens, 160 seats, and a full menu of salads, soups, sandwiches, appetizers, and pizzas.

It's the latter we're most interested in, though I gotta say: the beet salad ($10) we tried was excellent too.

Sweet roasted beets with a big old pile of mixed, well-dressed microgreens, chunks of creamy chèvre, and toasted walnuts. It's not a revolutionary flavor combination, but it's a nicely executed version of the classic.

Sandwiches run the gamut from a classic Italian (pictured, $11) to meatball ($11) to specials like the spicy beef short rib ($10). The Italian is made with When Pigs Fly's own mortadella and capacolla with salami, provolone, onion, tomato, and hot cherry peppers on When Pigs Fly bread.

Speaking of that bread, it's fantastic, but it would be nice if you were given a few complimentary slices when you place your order. It is a restaurant in a bakery after all, isn't it?

Now for the main feature: The Pizza.

Lemme tell you folks, this is some really good crust. Slightly sour, very flavorful, lightly seasoned, and wonderfully smoky, it's got flavor where it counts. The menu bills the pizzas as "Neapolitan inspired," and that's an apt description. Certainly they don't easily fall into any category I'm aware of.

For starters, they're much thicker than a Neapolitan pizza or even a New York-style pie with a chewy, bready crumb that stands maybe 1/4-inch tall. It does have the three requisite zones that define good crust in my mind: the thin, thin crackery, crispy, blistered layer on the very bottom; a thin layer of chewy bread above that; the soft, almost squishy slick area of moist dough at the crust-sauce interface.

The wood fired ovens get the pizzas out within minutes and are smokier than almost any other oven I've ever seen. The smoke visibly hangs out in a layer just inches above the oven floor, and you can really taste it in these pies. Check out how beautifully blistered the edges of the crust become:

Can't you almost taste the smoke?

Topping combinations run on the inventive side—asparagus with tomato pesto, chorizo with lime pickled red onion, or grilled pineapple with jalapeños, for instance—but thoughtfully composed. (All pies run between $12 and $18).

Littleneck clams come with with crispy bits of Benton's bacon, oregano, garlic, a squeeze of lime, and mozzarella from Fiore di Nonno in Somerville. It's a new take on the New Haven clam pie classic from places like Frank Pepe's. Is it as good as the New Haven versions?

Tough call. It's a totally different beast. Certainly, it's less brash, briny, and overtly juicy with a more refined, clothing-friendly level of grease. The crust itself cannot be faulted.

Sopressata made in-house comes on top of a pie that's also dotted with dates and drizzled with Mike's Hot Honey from Brooklyn. It's an interesting sweet, spicy, meaty combination, but frankly, I'd be happy with just the sopressata, which is super porky and curls up into crisp-edged grease cups under the heat of the oven.

Of the pies we tried, the most disappointing was actually the regular Margherita ($12). The crust and cheese are obviously great, but I found the sauce to be a little lacking. It's made with canned San Marzanos, but rather than tasting bright, moist, and fresh, it kind of dries up into a red patina that just barely coats the bread. The pie's also got a completely superflous sprinkling of dried oregano. Enough to turn me off completely? No way: this is still great pizza. I do hope they tweak that Margherita recipe a bit though.

Our dessert of panna cotta with dried strawberries and blackberries was smooth, creamy, and luscious in the way that good panna cotta should be.

Kittery, Maine is not the first place you'd think of when you think great pizza, but When Pigs Fly is doing its best to remedy that. 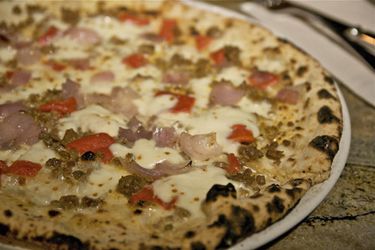