On a mild June morning back in 1998, I packed up a U-Haul truck in my hometown of Cincinnati and headed south to a much less mild New Orleans, Louisiana. My goal was to become a writer (and, hey, 20 years later, here I am). I'm sure the fact that my chosen genre is food had a lot to do with my destination that day. After leaving Louisiana for New York in 2003, I couldn't shake the foods, the flavors, and the culinary rituals I'd come to love while I was down there. I missed the smoky, tasso-infused gumbos; the hot boudin I'd pick up at a gas station on a day trip to Lafayette; the annual strawberry festival in Ponchatoula; the Monday red beans and rice. Luckily, over the years, I've learned how to source most of the things I enjoyed back then (and made a few new discoveries) online. And, while there's nothing like having these foods and drinks in the great state of Louisiana itself, here are eight ways you can experience the next best thing. A lot of Louisianians might find my list predictable (Community Coffee? Really?), but these are the things I miss most. Like they say, you don't know what you've got—until it's gone.

Is Community Coffee the best cup of joe the state has to offer? Hard to say. But it's the one that most reminds me of what it was like to sit on my old front porch on a rainy New Orleans morning, hands wrapped around a warm mug as I listened to WWOZ on the radio. The fourth-generation, Baton Rouge–based company has deep Louisiana roots. It was founded in 1919 by Cap Saurage, who started roasting it for local grocery stores and neighbors (hence the name), and it soon gained a foothold in Cajun communities before being more widely distributed throughout the region. While the coffee comes in several varieties and roasts, it's the chicory version I order most. Dark-roasted Arabica beans are blended with the ground chicory, giving it an intense, cedar-like flavor: bitter, with hints of roasted chestnuts. It's not for everyone. If you don't like chicory, I recommend Community's rich and bold Dark Roast.

A gumbo purist at heart, I felt like I was cheating the first time I resorted to a jarred roux. The whole point of making gumbo, after all, is the timeless—and time-consuming—ritual of hovering over a hot pot for an eternity or so, downing a few Dixies and stirring constantly to avoid those small black flecks that are the death knell for any roux. Thankfully, the jar I ordered was from Lafayette, Louisiana–based Bread & Circus Provisions. Co-owner Manny Augello makes sure his roux is consistent and smooth by cooking flour and fat low and slow in an oven for up to six hours. To finish it off, he adds green bell peppers, onions, and celery—the so-called Louisiana trinity—to the mix. "What I like about it is it produces a darker gumbo," Augello tells me when I call to ask him why his roux is so damn good. "And because it has the veggies in it, it cuts out an additional step." Order some up and you'll discover that making a complex dish like gumbo can be ridiculously easy. Just heat the roux up in a pot; add your stock, your chosen meats or seafood, and whatever else you please; and you'll have what tastes like a four-hour gumbo in about 60 minutes flat. Sure, it might be cheating. But once you've had a gumbo made with Bread & Circus's roux, you'll be able to live with yourself. A six-ounce jar makes about a gallon and a half of gumbo (two, if you like it a little thinner).

I love soda. I especially love regional sodas. And I especially-especially love regional sodas that taste like the region they hail from. That's the case with Swamp Pop, a brand of carbonated beverages that draw on the quintessential flavors of Louisiana, from ripe, candy-like Ponchatoula strawberries to tangy-sweet satsumas to filé-infused root beer, which isn't so weird when you consider that filé powder is nothing more than ground sassafras. The company is the brainchild of John Petersen and Collin Cormier, two cousins from Lafayette, who were inspired by the Louisiana farmers they grew up with—and the wonderful things they grew—when it came to the flavors they chose to offer. All of their sodas are sweetened with Louisiana cane sugar. You can order a couple of four-packs for yourself here.

The first time I made a pot of red beans and rice, I was chastised by an opinionated dinner guest for the one-pound bag of Goya kidney beans that sat by my stockpot as I waited for my water to start boiling. "You gotta use Camellia!" she hollered at me. And boy, was she right. For decades, Louisianians have sworn by the superiority of Camellia beans when it comes to making the state's most ubiquitous dish. Part of it, I'm sure, has to do with the bean's history (in Louisiana, old always equals good): A man by the name of L. H. Hayward started selling them at New Orleans' old French Market at around the turn of the 20th century, catering to the large number of Caribbean residents living in the city. The name's pretty, too—the company was named after L. H.'s wife's favorite flower. But Camellia's popularity goes far beyond tradition and flowers. These are really good beans. They're creamier and meatier than any grocery store bean I've ever tasted. A visit to the company's website puts forward a slick, marketing-driven explanation: "The USDA bean standards allow for two qualities: No. 1 and No. 2. No. 1 allows for 2 percent debris and damaged beans. Because the Hayward family has always ordered premium beans that are cleaner than that, their quality was dubbed 'The Hayward standard' long ago by suppliers." Sure, I'll go with that. Whether it's true or false, I will never again make a pot of red beans and rice without first ordering a bag of them online.

Boudin is the kind of thing that's best enjoyed while sitting on the hot trunk of a car outside a Louisiana gas station—which is where a lot of it is sold—from its trademark brown paper bag. (When I lived in Louisiana, there were a lot of discarded, grease-stained brown paper bags in the back of my car.) But even if you can't get yourself to the nearest Louisiana filling station, there are several sources for mail-ordering boudin. My favorite is The Best Stop Supermarket, in the small town of Scott, Louisiana. And I'm not the only one—they claim to sell around 2,000 pounds of the stuff each day. For the uninitiated, boudin is a south Louisiana specialty sausage, a spicy, meaty mixture of pork, cooked rice, green bell peppers, onions, and Cajun spices. (Sometimes that pork product can include liver, hearts, whatever's around—this is sausage, after all.) Best Stop is owned by Robert Cormier and his cousin Lawrence Menard, two men who grew up learning about Cajun boucherie. In the 1980s, fearing those traditions were going by the wayside, they opened The Best Stop, a grocery store and butcher's shop. Sold in half-pound links, their boudin is made with pork, pork liver, peppers, onions, MSG, rice, and green onions, among other delicious things. Place your order here (paper bags not included).

As a person who tries to make dishes like gumbo, red beans and rice, and étouffée as often as I can, I was always disappointed by the quality of the mushy, bland, and (my fault) burnt rice I used for each batch—that is, until I found this stuff. Ellis Stansel's Gourmet Rice is also known as "popcorn rice," since the aroma it gives off when it's cooking is reminiscent of a movie theater lobby. The rice was developed by the late Ellis Stansel and originated with an aromatic rice from Pakistan via France in the 1920s. Stansel eventually improved on the strain using hybridization, fertilization, drying, and milling methods until he came up with what just might be the best long-grain white rice I've ever tasted. Aside from popcorn, the rice has a nutty, toasty flavor that makes it great in gumbos and stir-fries, though it's not uncommon for me to eat the stuff straight out of the rice cooker, with a dab of hot sauce. Try some for yourself here.

These days, you can find andouille sausage in gourmet grocery stores throughout the country. It's made in New Jersey or someplace like that, and sold in plastic-wrapped packages of four or five links. But let me tell you something: It's nothing like the stuff you get in Louisiana, especially if it's the stuff made at Poche's Market, Restaurant and Smokehouse in the Cajun Country town of Breaux Bridge. So good is Poche's andouille that every time I bite into a link of their coarse, porky, spicy smoked sausage, I want to pack up my Brooklyn apartment and head back to Louisiana so I can have it every day. A central component of the best gumbos and étouffées, andouille sausage is among the signature meat products of Cajun charcuterie. And Poche's, which opened in 1962 and is owned and operated by Floyd Poche and his wife, Karen, has had plenty of time to learn how to do it right, seasoning it with just the right amount of salt, garlic, and red and black pepper. It's a simple recipe, yes, but once you've tried it, you'll never settle for that grocery store stuff again. Order a link or two here.

The Poches also make some mighty fine mail-order tasso, the lean spiced and smoked ham that's another essential ingredient in the best gumbos and étouffées. Theirs comes in big slices that are seasoned with jalapeño peppers, mustard, vinegar, and spices, then smoked in the Poches' on-site smokehouses. (I've been inside one. And yes, I felt like I'd died and awoken in Cajun pork heaven.) Aside from its role in classic Louisiana dishes, tasso imparts an otherworldly, smoky flavor when added to pasta dishes like carbonara, shredded into eggs, or used as a pizza topping. 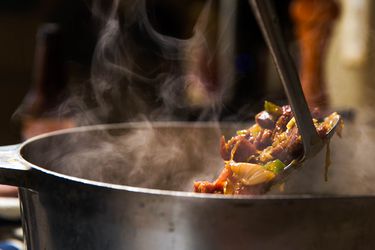 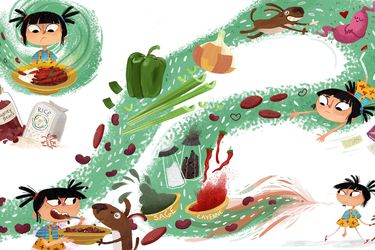