As we rocket toward the Fourth of July, what better way to celebrate what's essentially America's national dish than with a visit to where it all supposedly began—Louis' Lunch in New Haven, Connecticut. Leave it to Nick "Beef Aficionado" Solares to cover the joint the way it needs to be covered. —The Mgmt.

261-263 Crown Street, New Haven CT 06510 (map); 203-562-5507; louislunch.com
Short Order: One of the nation's most important hamburger institutions, Louis' Lunch lays claim to having invented the dish we love so much. Cooked in a unique vertical broiler, the lean mix of beef is flavorful if not particularly juicy. In fact, the burger here is known more for its isn'ts than anything else. It isn't served on a bun but on slices of Pepperidge Farm white bread. It isn't served with condiments. It isn't going to bend to newfangled burgerworld whims. It is, however, a unique contribution to America's national cuisine
Want Fries with That? Fries? There are no fries here, fool. You can get chips, though. Other items on offer are homemade pies, potato salad, and soup. Drink a Foxon Park soda with it; the root beer is amazing
Price: $4.50

Louis' Lunch in New Haven, Connecticut, has been making its hamburger sandwich since 1900, making it the longest continuously operating hamburger restaurant in America and claimant to be the creator of the venerable sandwich.

And while the world has largely adopted the plain white bun as the bread of choice for a burger, Louis' Lunch continues to serve them in its own distinct manner, vertically broiled, served on white bread, and sliced in half with the only permissible additions being onion, tomato and a cheese spread. The spread is necessary because the unique vertical broilers that Louis' Lunch uses would not be able to accommodate regular cheese.

Don't even think about putting ketchup on a burger at Louis'; there is a sign admonishing against even asking for it, because as Jeff Lassen, fourth-generation owner, says, "We want you to taste the meat."

Let's examine the recipe and its origins. The claim regarding the creation of the first burger is that one day in 1900, founder Louis Lassen had some leftover meat that he had ground up when a customer in a hurry rushed up to what was then a tiny lunch wagon and demanded something quick and delicious. According to legend, Louis formed the ground beef into a patty, cooked it, sandwiched it between two slices of bread, and sent the customer on his way.

I have not been able to determine if the tomato and onion are part of the original recipe, but if they were, I think it is interesting that the recipe has remained so static. It could be considered, I suppose, one of those happy accidents. After all, it’s not like much thought went into the creation of the first burger. It was, frankly, a bit of an afterthought.

There are, of course, numerous challenges to Louis' claim and even some—most notably Josh "Mr. Cutlets" Ozersky—who don't even consider the sandwich that Louis' Lunch serves to be a real hamburger at all because of the use of sliced bread instead of a bun.

The argument is semantic to a degree, but Ozersky may have a point, a burger served on a bun is instantly recognizable the world over as a hamburger. Show most people a Louis' Lunch burger and they will probably not recognize it as a hamburger but as a sandwich. Indeed, one of the staples of any generic diner menu is the patty melt or shuttle burger, a hamburger patty served on toast that is often listed separately from the burgers on offer. Certainly the popular vernacular has adopted the bun as the vessel of choice for the hamburger patty; despite this, Louis' Lunch steadfastly sticks to its roots.

Whether you consider Louis' Lunch's fare a hamburger is inconsequential to the Lassens and their legions of devotees. They have been serving burgers their way for more than a century. Despite its diminutive size, the space that houses Louis was once far smaller, being literally a wagon. The wagon was eventually moored to the side of a tannery for the better part the twentieth century, until the mid 1970s, when the tannery was demolished and Louis' was forced to move four blocks to its current location.

Despite the geographic shift, a portion of the original counter remains in use today, along with the broilers that date back to 1898. The move added a basement, and it is here that the custom mix of five different fresh meat blends are hand-formed into patties every morning. Louis' Lunch has remained steadfastly devoted to the original way of doing things, so using frozen beef, a concept that did not even exist when the place started making burgers, is not even conceivable. Nor is the use of what is these days is commonly known as the hamburger bun; it did not exist until 30 years after Louis opened.

Walking through the doors at Louis' Lunch is indeed like the cliché of taking a step back in time. Not much has changed. The building is listed in the National Register of Historical Places, and Louis' Lunch has been the recipient of numerous awards and proclamations confirming both its historical significance and its burger pedigree.

It was featured prominently in George Motz's film Hamburger America, as well as on numerous television programs. Just last week I caught a rerun of Hamburger Paradise on the Travel Channel, which featured a segment on Louis'. The stout-looking brick structure with its quasi-Victorian design looks not unlike a gingerbread house with its arched doorway and latticed window panes.

Walking through the archway reveals cramped confines that are almost entirely encased in well-worn wood that bares the carved graffiti of a century's worth of teenage romances. Literally every exposed wooden surface has been marked with names and hearts, sometimes with the names crossed out and others added in their stead.

Behind the impossibly small counter that faces the entrance are the three vertical broilers, a unique toaster that dates back to 1929, and enough room for assembling the burgers but not for much else. It is here that one can marvel at the quaint and unique method of burger production employed by Louis'. The beef patties are placed in a hinged two-sided grill rack that closes around them. They are then inserted vertically into the gas-powered side-firing broilers. If you order onions—and I recommend you do—they are also grilled along with the beef. The vertical grill allows what little juices and rendered fat the lean beef has to cascade down onto a collection pan. Once the burgers are cooked, the patties are removed from the broiler and placed on sliced toast.

Louis' serves its burgers medium-rare by default but will honor other temperature requests. If you order a cheeseburger, the bread will be spread with a Velveeta-like concoction. Tomato is added if so ordered, and the sandwich is cut diagonally, often asymmetrically, down the middle. The bread used is Pepperidge Farm white, which actually originated in nearby Norwalk, Connecticut, in the 1930s, so it is likely that it has been the bread of choice at Louis' Lunch for quite some time.

"No fries are served, but you can get potato chips."

When it comes to beverages, Louis' also keeps it parochial by serving Foxon Park soda, another Connecticut staple and producers of some of the finest root beer I have tasted. No fries are served, but you can get potato chips.

The burgers are served on paper plates, and while the patty is quite thick, probably around six ounces, the content of the beef is somewhat anemic. It is very lean indeed, but is nonetheless surprisingly (albeit relatively) moist and flavorful. Certainly it is not juicy in the current state of the burger world, so the thin slice of bread has no trouble absorbing the small amount of liquid that emanates from the patty. I would estimate that we are looking at beef which is around 15 percent fat versus the 75-25 lean-to-fat ratio that is so popular these days.

I think there is really something to the custom beef blend that Louis uses because I have never eaten such a lean burger with so much flavor. It has a hearty beefy taste and texturally, despite being compressed during cooking, it is quite airy, flaky, and crumbles easily.

What the cooking method does not achieve is the charred crust that is so much of the allure of flame grilling. It seems most of the char is left on the grill rack. I recommend getting onion on your burger here because it does add some moisture and also because it tends to get a bit charred, adding a pleasing flavor and textual component to the sandwich.

"I cannot think of a burger that is crying out for ketchup or mustard more than the burger at Louis' Lunch."

Personally I am not a big fan of tomatoes, but I can see that this would further moisten the sandwich. The dry white toast does not help the proceedings. Quite frankly, with its very lean beef mix and dry white bread exterior, I cannot think of a burger that is crying out for ketchup or mustard more than the burger at Louis' Lunch. At least not a burger that is worth eating. I find it curious that adding ketchup is shunned because it was not part of the original recipe, yet using the Velveeta-like spread that was added to the recipe back in the 1970s is somehow OK.

And the argument that ketchup is a strong flavor that will overpower the beef seems somewhat spurious when you are adding a processed cheese spread, something that is far more noxious in my view. Having said that, biting into a Louis' Lunch burger is still a pleasing and rewarding experience, beyond the historical significance of the institution. The crisp bread gives way to the flaky burger, which, when cooked rare, does have some succulence, at least in the middle of the patty.

I don't recommend the cheese spread; it doesn't really add much flavor and lacks the textural component that makes real cheese so good on burgers. But the star of the show is the beef blend, which, as I said, is an impressive creation.

I have eaten burgers with almost every conceivable type of bread, and while I can appreciate Louis' contribution for its own aesthetic and historical charms, I will say this: I am sure glad that the rest of the world adopted the hamburger bun. Having said that, I am glad that Louis' exists and continues to thrive. It is a remarkable and unique thread in the tapestry of American life and an indispensable part of our culinary history. 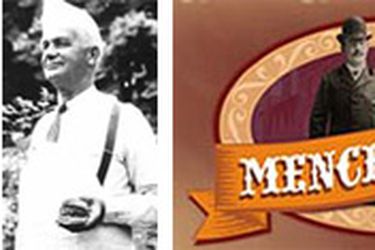