I'd always figured fettuccine Alfredo was about as authentically Italian as an Ellio's frozen pizza; something concocted by the Olive Garden's chefs at their Tuscan cooking academy, perhaps. But it turns out that the dish has quite a lengthy history in Rome. Ever since the 15th century, Romans have been eating pasta with a simple, light cheese sauce, made directly in the pot with the pasta. Fettuccine alla romana, made by tossing fresh fettuccine with Parmesan cheese, is Alfredo's most direct ancestor. Spaghetti cacio e pepe—a late-night drunk-food staple for Romans, made by tossing spaghetti with Pecorino Romano, black pepper, and a touch of pasta water—is a very close cousin.

According to this 1981 New York Times article on the dish, the modern version—what we know in the States as fettuccine Alfredo—was invented by Alfredo di Lelio (yes, Alfredo was a real man!), who first put it on the menu at his Trattoria Alfredo sometime around 1914. His version of fettuccine alla romana added extra butter to the mix, though it wasn't until it reached the New World (and perhaps corporate mega-chain kitchens) that it became commonly known as fettuccine Alfredo. His extra-buttery version remains a far more popular dish stateside than it is in Italy, though you'll still find it on tourist menus near the big sights in Rome.

These days, most plates of fettuccine Alfredo come in all-you-can-eat portions, smothered in a heavily thickened, cream- and starch-fortified sauce flavored with dusty-tasting domestic faux-Parmesan cheese (perhaps with a side of endless breadsticks). Even recipes for the dish at home are made with an astonishing amount of butter and cream—a full cup of cream and a full stick of butter for a pound of pasta is not uncommon.

Now, don't get me wrong—I'm not a health nut or a calorie counter. But let's face it: The feeling you get after downing a bowl of creamy, cheesy fettuccine Alfredo ain't the best. Wouldn't it be great to have a quick and easy version that's just as good as these cream-packed renditions, but has a cleaner flavor and doesn't leave you in a food coma?

The idea is to build a dish that bridges the gap between fettuccine alla romana, with its light cheese-and-pasta-water sauce, and hardcore Little Italy–style fettuccine Alfredo, with its gut-busting creaminess. After swimming in cheese sauce for a weekend, I came up with a recipe that really works (and in under 20 minutes, no less!). Here's how.

First things first: You want to use real, honest-to-goodness Parmigiano Reggiano for this dish. The flavor of the dish comes from the cheese, so you're shooting yourself in the foot if you reach for that green can. Pre-grated stuff from a good-quality cheesemonger or a good supermarket is fine, so long as it's true imported Parmigiano Reggiano. (Look for those words specifically, not just generic "Parmesan.")

I tried incorporating the cheese a number of ways, including shredded and Microplaned, but the best approach was to grate it on the rasp-y side of a box grater. You know, the side that has little holes that look like they were punched through with a tiny screwdriver? The knuckle-grater side? Yeah, that one.

I settled on five ounces of cheese per one pound of pasta.

Now, today's gut-buster renditions of Alfredo sauce are made by combining melted butter with heavy cream and cheese, then tossing it all together with the pasta. The question is, how do you get a similarly thick and rich texture without as much dairy fat?

I tried a few different methods, including making a besciamella out of milk instead of cream (too much effort for what should be an easy dish), using half-and-half in place of cream (it made the dish taste weaker without actually tasting much lighter), and using various other dairy products (crème fraîche made for a wonderful dish—not too different from the One-Pot Tuna Noodle Casserole I made a couple of weeks back—but it didn't taste like Alfredo to me).

In the end, I pulled a page from a standard cacio e pepe recipe: using plenty of starchy pasta water to help emulsify and thicken a sauce made mostly of melted cheese. By using about a cup and a half of pasta water, I was able to make a sauce that tasted rich and creamy with only about two tablespoons of actual heavy cream and butter in it (and, okay, I also added a couple of tablespoons of extra-virgin olive oil to bump up the flavor). To help it thicken and cling to the pasta better, I also whisked in a single egg. It's by no means a traditional ingredient, but it makes a huge difference in the texture of the sauce, without altering its flavor much.

I did find that in order to get enough starch in the water, I had to cook my pasta in a much smaller volume of water than is normally recommended for pasta—about two quarts for a pound of pasta—but, as it turns out, pasta comes out perfectly fine in a smaller volume of water, and the reward is extra-starchy pasta water.

A small pinch of pure cornstarch ensures that your sauce will thicken properly, even if your pasta water doesn't quite cut it. (This is good, as the amount of excess starch the pasta gives up to the pot can vary from brand to brand.)

The best part of this sauce is that it requires no advance cooking. You simply whisk the ingredients together and set 'em aside while you cook the pasta.

The last question left to answer about the sauce was which extra flavorings to add. Black pepper—and a ton of it—is a no-brainer. I can't imagine a cheesy pasta dish without black pepper in it, whether it's cacio e pepe, carbonara, or Alfredo. And forget the whole "would you like fresh pepper on that?" thing with the ultra-long pepper mill at the restaurant: You want the pepper built right into your sauce.

What about garlic? It's not part of the original recipe, but when I posed the question to the Twittersphere, the overwhelming response was yes to garlic flavor. In the interest of keeping the recipe streamlined, I found that when I added the garlic directly to the butter, then tossed it with the cooked pasta before adding the sauce, the residual heat from the pasta heated the garlic enough to get rid of its raw bite, while still providing plenty of flavor to the bowl.

Finally, we get to the actual pasta. Fettuccine Alfredo is supposed to be made with fresh fettuccine, and that's how I prefer it, though you can use dried pasta if you wish.

The key is to make sure that the noodles aren't overcooked when you boil them, as they'll continue to cook a bit once they hit the hot sauce. For fresh noodles, about 45 seconds in the water is good enough.

For dried noodles, you want to go for a minute or two less than the package directions indicate.

There we go—all set. Drain the noodles either by fishing them out with a set of tongs, or, better, by pouring them into a colander set in a large bowl. That way, the starchy pasta water gets saved.

Set aside a couple of cups of pasta water (dump the rest), transfer the noodles to the bowl along with the butter and garlic, then toss it until the butter is melted. This will keep the noodles from sticking together while you finish the sauce.

Working quickly, whisk some of the hot pasta water into the bowl with the sauce mixture.

It'll end up kind of soupy-looking—starches don't fully hydrate and thicken until they've been heated. So scrape this mixture into the now-empty pasta pot, and heat it on the stovetop, stirring constantly, until it turns thick and rich. It should take only a moment.

Once that's done, add the pasta to the sauce, and turn gently to coat.

If you, like me, end up taking too much time by doing silly things like taking photos, the sauce will over-thicken, and you'll need to thin it out with a bit of pasta water.

Now we get to the absolute most important part when it comes to fettuccine Alfredo: Serve it immediately, and serve it hot, preferably in pre-warmed bowls. Cheese sauce does not get better as it sits around.

I like to top mine with chopped chives, some extra cheese, a bit of lemon zest, and some olive oil. (I sometimes work that lemon zest into the sauce as well, hint hint.)

Oh, and in case you were wondering, this noodle party is, unfortunately, BYOB.* 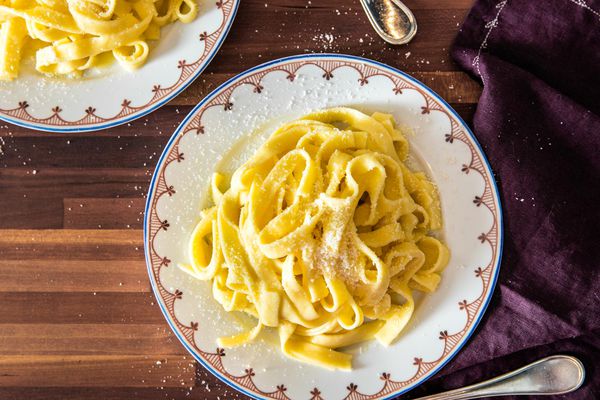 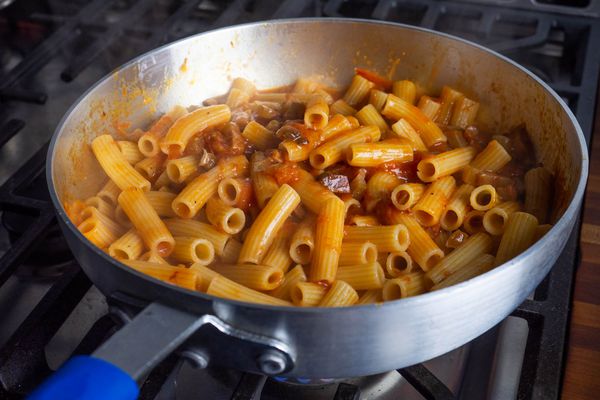 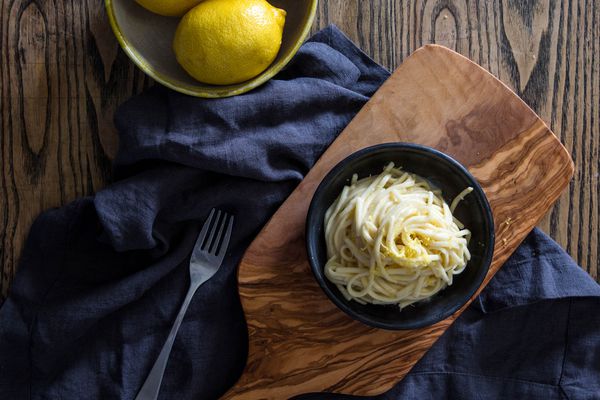 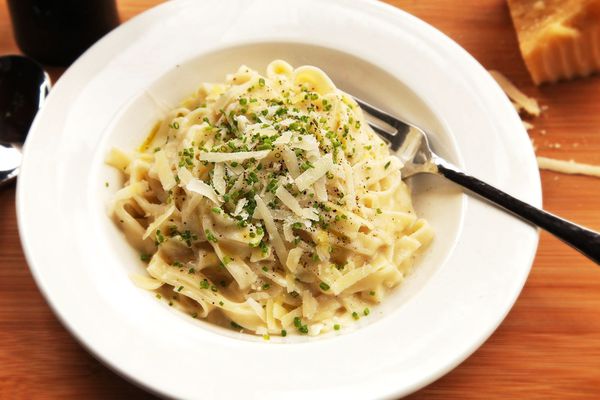