Funny story. I've probably mentioned this to you before, but bear with me: in her early teens, my mom used to supply the Managua (Nicaragua) country club with desserts, namely turrón de chocolate (choclate biscuit cake) and something called queque cristal. This "crystal cake" became and remains such a favorite over there that I was tempted to post it in my "Dulces" column as a Latin American recipe. But, just a few weeks ago, my friend and food photographer Kate Kelley, brought me a few old cookbooks—we both share a love of retro food and were planning to shoot some wacky desserts.

Garish and campy, the first edition, ninth printing (1972), of "Better Homes and Gardens: Pies and Cakes" had all sorts of funny recipes that were perfectly suited and inspiring: daiquiri pie, strawberry sunshine pie, calico crumb cake, and something that looked right out of Betty Rubble's (or as I know her, Betty Mármol) cookbook. It was called almond-brittle torte.

I called my mom and grilled her for answers. Where had her queque cristal recipe come from? She couldn't really say, it was so long ago and far away that it had come into her hands...My spider sense tells me grandma tore it out of some issue of Better Homes and Gardens while living in La Jolla or Houston and promptly incorporated it into her dessert repertoire.

The torte is delightful, whatever handle it goes by. Airy sponge cake is sliced, filled, and covered with whipped cream, then encrusted with crunchy coffee-flavored brittle and adorned with slivered almonds. The original, I decided, needed some sprucing up, though, so I increased the coffee flavor and incorporated coarse chunks of toasted almonds into the brittle. The combination of cloud-like cake and shattering candy coating is nothing if not irresistible. 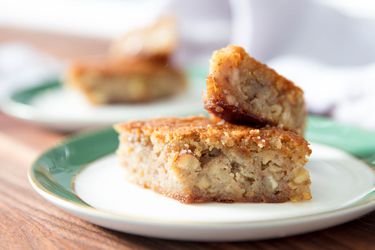