Fried until intensely crisp and crunchy on the outside and meltingly tender within.

As much as I love my mother-in-law's fried spare ribs, my heart will always belong to my one true love of Filipino food—lechon kawali, or boiled and deep-fried pork belly. The exterior of lechon kawali is salty and extra-crispy, while the interior is tender and moist with fat and juicy meat. It's a rich combination that pairs extremely well with the mild tartness of cane vinegar, which cuts through the fat just enough to make eating a whole plate of fried pork a dangerously simple task.

Despite the clear risk to my health, I've spent quite a bit of time perfecting the recipe. Prepare thyself.

Belly of the Beast

Part of the magic of lechon kawali is the bubbly, ultra-crisp skin, so the first step is to make sure you get skin-on belly. I also recommend getting boneless belly for ease of preparation, but if yours has some rib bones attached, they can be removed before or after boiling.

Once you have the belly, the next thing you'll need to do is boil it, which helps render out some of the fat before frying. Based on other recipes I've seen, there's a split between boiling the belly in plain salted water and water that has additional seasonings like garlic, peppercorns, bay leaves, and soy sauce. I decided to do a side-by-side comparison to see how much of a difference that made.

I simmered the belly in the two different baths for a little over an hour, until I could pierce the skin with a paring knife and the meat was tender. I noticed right away that the pork simmered with seasonings had a more attractive light-brown appearance (at left, below), and once I fried them up, it was also the clear winner for flavor too.

The next step is to air-dry the boiled pork in the fridge overnight before frying, which helps ensure the skin will crisp and puff up when fried (I've tried the recipe without this air-drying stage and it's just not as good). I give the boiled pork a generous seasoning with salt, since the seasoned water isn't quite enough to season it thoroughly, then set it on a wire rack and put it in the refrigerator overnight.

To prep the belly for frying, I cut it into slices about two inches thick—any thinner and you'll over-crisp the pork, leaving very little juicy and tender interior; any thicker and you risk not fully heating the pork through by the time the outside is golden and crispy.

The result: a crisp and crunchy exterior, with tender, melting fat and meat right under the surface.

Just look at those little air bubbles in the skin.

By the end of testing, my wife and I had eaten more lechon kawali than any human should in just a few days.

But that's the power of lechon kawali: Despite being a pure, unadulterated dose of pork, you just don't tire of it. I take solace in the fact that if I'm going to eat such a large amount of meat and fat, I'm at least doing it in one of the most delicious ways possible. 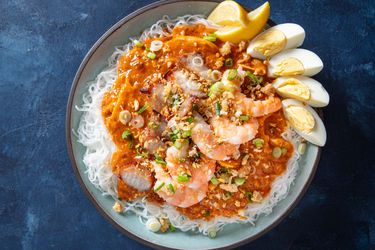