Pouring beautiful steamed-milk designs on espresso drinks isn't neuroscience, but it can be tricky to get a grasp on the fluid dynamics of milk meeting espresso. Breaking down the genesis of any latte-art design into the four main components of its creation, however, can make the process easier to digest—unless, of course, you're lactose intolerant.

Here are the most important aspects to pay attention to when you're pouring, to get something lovely and deliberate in the cup every time.

"Think of the milk stream as being like someone jumping into a pool from a diving board."

Because you don't immediately want a tidal wave of white foam to overpower your brown coffee canvas, the first thing you need to do is let some of the liquid steamed milk create a base layer under the espresso before placing the foam on top to make the design. To do this, think of the milk stream as being like someone jumping into a pool from a diving board, and think of the espresso in the cup as being the water in that pool.

A high diver not only starts her descent far away from the surface of the water, but she also tries to make her body as narrow and compact as possible when she makes entry contact with that water, in order to create as few ripples and as little turbulence in the pool as possible. The first milk that you pour into your coffee should be like this high diver: Thin—about the thickness of a mouse's tail—and poured from slightly above the surface of the coffee, about 2 inches or so.

If the high diver is looking to pierce the water, then a belly-flopper hopes to splay out on top—just like you'll need your foam to do in order to make a heart or even a rosetta (eventually). To maximize the effect of the flop while minimizing the pain, this swimmer might get right close to the surface of the water before jumping in, which is just what you need to do with your milk to start to lay the foam on top.

When you've already done the high-dive pour to fill the cup a bit with milk, and you're ready to start your surface design, bring the pitcher as close to the coffee as possible while pouring; you should see that the closer you get, the more white lays on top of the drink, rather than sinking below. So remember this rhyme: Start high and slow, then bring it down low. (We'll add one other part to this in a minute.)

Where you drop the milk into the coffee makes a big impact on the symmetry and style of the design. Remember that you're pouring one liquid into another, which means that the 'canvas' isn't going to simply sit still while you draw on it: The force of the liquid milk folding into the espresso will push the design and the drink forward, mixing it while you pour. If you pour consistently in the direct center of the coffee itself, you'll get a centered design that expands outward, but if you pour off-center, the motion created by the milk entering the espresso will create a long snake-like trail that will awkwardly curl around the inside curve of the cup.

Advanced Positioning: If you pour with the cup sitting flat on top of a counter or table, it's easier to aim for the center but it won't give you as much depth of crema for the foam to settle on when you're trying to make your design. If you tip the cup slightly at the beginning of the pour and steadily straighten it throughout, you'll have to gently reposition your stream of milk so that it's centered, but you'll get better contrast between the white and brown when you master the subtle skill.

How much or how little milk you pour out of the pitcher as you go is a significant contributor to either beauty in the cup or mess on the floor. Pouring too much too fast will disrupt and even disintegrate the crema on the espresso, which we want to keep in place to act as our 'canvas.' (Pouring too much from too far away from the cup also results in Splashtown, U.S.A., which means messy shoes and milk everywhere, no pretty design.)

Remember the little rhyme we started: "Start high and slow, then bring it down low?" Finish it off with, "Increase the flow," and you'll be well on your way to pretty drinks.

By "bring the pitcher down low," I mean as low as you can go: Remember that the closer you are to the coffee, the more design will appear—you actually want the pitcher to make contact with the cup, that's how low I want you to get.

Note, too, that "increase your flow" comes after bringing the pitcher down low, not during—don't increase your milk volume while you come down, but once you've gotten to your lowest and closest point in the cup. The combination of the closer proximity and the increased volume will bring the white foam out of the bottom of the pitcher and allow you to lay it (masterfully, artfully) on top of the espresso.

The first three fundamentals are great if all you want to make are hearts and 'monk's heads,' the classic white apple shape that tops many cappuccinos. If it's rosettas and tulips you're after, you've got to have control over your milk.

Creating a very basic rosetta isn't as complicated as it might seem, but it does require understanding of the above three elements: Height, position, and flow. Where the control comes in here is with a gentle side-to-side rocking motion of the pitcher, which creates the petals of the flower design.

First, about the movement itself: It's not an aggressive back-and-forth motion, and shouldn't require the use of your whole arm. Instead, it's more of a gradual pumping of the brakes, a gentle rocking of the pitcher that's created by squeezing and releasing your fist around the handle of the milk pitcher, just like if you were pumping the brakes on your bicycle.

Control the rocking by pushing off a bit with your thumb, and you should get an even and consistent pendulum action in the pitcher, which is what will create your petals when you are close to the coffee in the cup and pouring at a fairly aggressive flow rate.

When you have the desired number of petals and are ready to finish the rosetta, lift the pitcher up to about 2 inches above the coffee again, just like when you were first starting out with that high diver, and pull the thin stream of milk through the petals from smallest to largest, creating an elegant 'stem.'

The control aspect of making a tulip comes from knowing when to stop and start pouring milk in a slightly interrupted manner. Rather than rocking the pitcher from side to side, tulips are created by simultaneously controlling height and flow.

Start your pour high and slow, just as before—but rather than continuing to pour when you bring the pitcher low, stop the flow of milk completely and then lower your pitcher.

When you start pouring again—into the center of the coffee—be sure you're as close to the coffee as possible, and pouring an aggressively heavy, steady stream of milk. You should see a white halo form inside the cup, which will become the first level of your tulip. When it reaches the desired size, interrupt the flow of milk from the pitcher and move the tip slightly backwards before starting to pour again (close and fast), which should create your second layer. Repeat the process again to make a third tier, and then reduce the flow while lifting the pitcher up away from the coffee, and draw through to finish the "petals" of the tulip.

Have you ever tried doing latte art? We want to see it! Send your photos of your best latte art to us by Monday 11/18 and we'll share 'em on Serious Drinks. 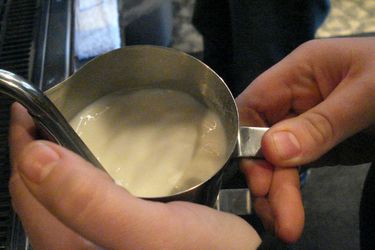 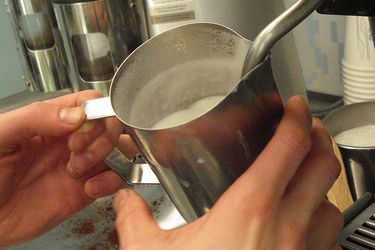 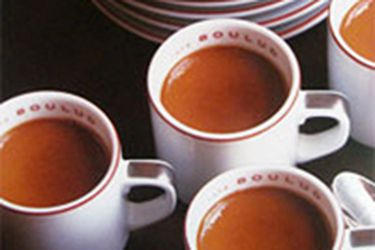 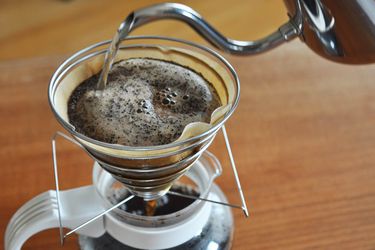 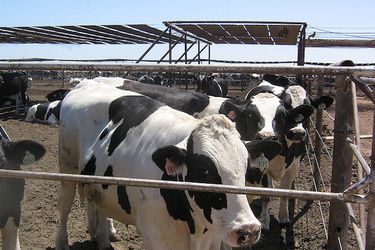 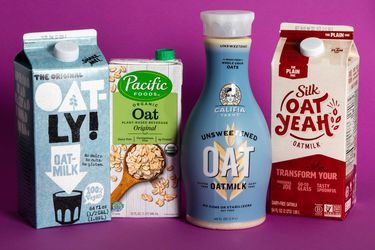