Two things I hate about many Mexican restaurants in this country: the rice and the refried beans. We'll discuss the rice at a different point and focus on the beans in this post.

Usually, the beans are an unappealing mauve and so runny they bleed all over the plate. Flavor-wise, they're insipid and leave me wondering whether the whole beans were puréed but never introduced to a skillet shimmering with oil—or better yet, lard.

Refried beans are served not only in Mexico but also in many other bean-eating countries in Latin America. The recipe that accompanies this post hails mostly from my kitchen, influenced by the many different versions I've tried. They are thicker, more cohesive, and more concentrated in taste than the above-mentioned beans, being cooked for about a half hour, during which time much of the beans' liquid is evaporated.

Lard is the preferred cooking fat here, as a porky backbone is a must. If you cannot obtain real lard, an option to render bacon is provided in the recipe. Onions, garlic, and dark brown sugar are caramelized in the fat—the sugar adds a touch of sweetness that's unexpected and balances the final dish—then puréed into the beans. Next, the beans are cooked under steady supervision; as they cook, you will notice the texture turn from slop into a delicious quicksand that tugs gently at the spoon. A cast iron skillet, preferably one that has been well seasoned (mine is only used for cooking pork products and, of course, refried beans) is the best pan to use because it produces a crust that gets scraped up and incorporated into the beans. Yellow mustard, ketchup, and Worcestershire sauce, though unusual, are common seasoning elements in many Latin households and they are included here.

Velvety and intense, these are the best refried beans you've ever had. And, do try them with the suggested sprinkling of crushed pork cracklings and crumbled cheese. 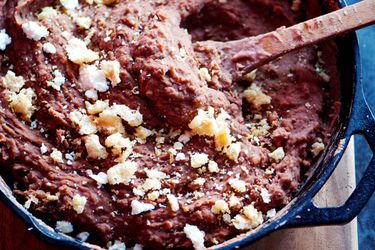