I visited the Serious Eats test kitchen in Brooklyn back in October of 2018 to shoot this video about my Korean fried chicken recipe. Over half a year later, the fried chicken I cooked in the video bore only a slight resemblance to the one I served at my restaurant, Wursthall.

Nor is it very similar to the one I served at a strip mall in the San Gabriel Valley, during a pop-up event for my first book tour. Or the one you may have seen me make on Guy's Grocery Games. In fact, I've been playing with some iteration of the concept of a kimchi-brined fried chicken sandwich for many years now, so what you're seeing in this recipe and video are really just a snapshot of a dish that's still evolving. Heck, there are two distinct versions in the video alone!

Evolution of a Chicken Sandwich

The recipe I'm talking about today is more like Southern-style fried chicken with Korean flavors. It takes some influence from Nashville hot chicken and fast food chicken sandwiches as well. On the menu at Wursthall, we've been reluctantly calling it "K2FC"—Kenji's Korean fried chicken. I get embarrassed seeing my name printed on the menu like that, but my partner insists.*

*Strangely, it's a secondhand kind of embarrassment. I look at the menu and think, Ooohhh, who's that Kenji guy who decided to name a dish after himself? Yikes.

The very first time I made this sandwich, it was at a friend's house in Jamaica Plain, near Boston. The idea of marinating chicken in kimchi brine had just struck me. I already knew that pickle juice makes a great brine for fried chicken—aside from adding flavor, the high salt content alters the protein structure of the chicken so that it retains more moisture as it cooks, and the acidity has a tenderizing effect. The same should work with kimchi brine.

So we tried it. It was a pretty quick-and-dirty affair—essentially my five-ingredient fried chicken sandwiches, made with kimchi in place of pickles—but it was promising.

The next batch was a little more involved, using my buttermilk fried chicken recipe as the base. I brought that version to an event my old boss Ken Oringer was throwing for the 15th anniversary of his restaurant Clio (which has since been taken over by his sashimi bar, Uni), featuring a 20-course tasting menu cooked by alumni of the restaurant. Nineteen of the world's leading chefs, and me with a fried chicken sandwich.

I'd been planning on serving it with a mayo spiked with gochujang (Korean fermented chile paste) on mini Martin's potato rolls, but Alex Talbot, half of the husband-and-wife team behind Curiosity Doughnuts and the seminal blog Ideas in Food, suggested making a dill-pickle mayonnaise instead, so I went with that, and boy, was it delicious. My friend Jamie Bissonnette, the chef at Little Donkey in Cambridge, Massachusetts, and Toro in Boston and New York, was at the dinner and texted me mid-service to proclaim the sandwich "totally craveable." High praise!

I decided to keep working on the sandwich, serving it at a series of pop-ups in New York, Boston, Los Angeles, and San Francisco during my book tour, each time offering a slightly different version.

By the time I brought it to Serious Eats, this was where we were: chicken thighs brined in kimchi juice, along with buttermilk, eggs, garlic, salt (just enough to account for the added liquid from the buttermilk), and soy sauce (soy sauce contains proteases that can help tenderize meat), as well as ground black pepper and gochugaru, a Korean chile flake that offers a lot of floral aroma and a bit of heat. You can read about more Korean pantry staples right here.

The sauce starts out like a Nashville hot chicken–style hot oil. I combine oil with chiles (more gochugaru), along with black pepper and garlic, then heat it up until it's sizzling and toasty-smelling.

If you want to keep it real simple, this is a good place to stop. The fried chicken dipped in hot chile oil is delicious all on its own. But I decided to continue by emulsifying that chile oil into a sauce with gochujang, honey, cider vinegar, and a little soy sauce. It comes out with a sweet-hot-vinegary flavor profile—not unlike Buffalo sauce, but with a deeper, toasty chile flavor.

Next, it's time to dredge and fry the chicken. My standard fried chicken dredge is a mixture of flour and cornstarch, along with a dash of baking powder. The cornstarch and baking powder help the chicken to fry up extra light and crisp.

To this base, I add some more gochugaru and black pepper, along with black sesame seeds and garlic powder. (Garlic powder works well in dredges and spice rubs, where fresh garlic is likely to clump or burn.)

The real trick here (and in literally every single one of my fried chicken recipes) is to drizzle some of the liquid brine into the dredge and massage it in with your fingertips, creating little clumps of breading that add texture and surface area to the chicken as it fries.

Some folks like to rest their chicken after dredging and before frying. I find that the flour over-hydrates this way, producing a crust that's a little leathery. Instead, I prefer to fry immediately after dredging.

My frying vessel of choice at home is a flat-bottomed wok. The wide, flared sides make it easy to flip and maneuver the food inside, while also catching spatter before it hits your stove or countertop.

Peanut or soybean oil is excellent for deep-frying, delivering crispy crusts and neutral flavor. Canola or vegetable will work, too, though the chicken won't end up quite as crisp. I aim to keep the oil at 275 to 300°F (135 to 149°C) the whole way through.

Once the chicken is fried, I drain it, brush it with the sauce, and sprinkle it with a spice blend containing gochugaru, black pepper, black sesame seeds, and a touch of sugar.

Serve the chicken on a toasted potato bun, with a smear of kimchi mayonnaise (which is just drained kimchi, chopped and mixed with mayonnaise), plenty of dill pickles, and a pile of shredded cabbage. It's pretty tasty!

Even tastier is the version we made on Stella's biscuits. You can find the basic recipe in her book, BraveTart; here, she tweaked it by folding black sesame seeds into the dough.** For that version, I went extra light on the sauce, omitted the kimchi mayo, and instead added a drizzle of honey.

** Another version of these biscuits involves adding sliced scallions along with the sesame seeds, which you'll hear Stella mention in the video. Her final recipe doesn't include the scallions, but you can go ahead and add a handful if you want.

Folks who've been to my restaurant know that the dish in this video is pretty strikingly different from the fried chicken and waffles we serve daily. But, in fact, the Wursthall fried chicken was directly inspired by the black sesame biscuit sandwich!

The chicken starts out essentially the same, though we also add some gochujang to the brine. I've written previously about double-frying chicken—that is, frying it, letting it completely cool, then frying a second time before serving—and that's the technique we use here.

The idea is that after the first fry, moisture from the inner layers of breading eventually starts to spread out, causing the whole crust to soften a little. The second fry drives out moisture a second time, leaving you with an extra-crisp crust. We fry our chicken in 225°F (107°C) soybean oil, to an internal temperature of 155°F (68°C), then chill it and re-fry it to order, at 300°F (149°C), until it's crisp.

Instead of a bun, we make scallion cornbread waffles, a modified version of my brown butter cornbread—we increase the ratio of regular flour to cornmeal a bit, and reduce the amount of fat, for a little more structure—to which we add scallions, cilantro, and black sesame seeds, before baking in a Belgian waffle iron.

To finish the dish, we spread the waffles with kimchi butter (kimchi, butter, and gochujang combined in a food processor); place the chicken on top; drizzle it all with honey; and add a pile of our lacto-fermented dill pickles and a big splash of our house hot sauce (which is simple: Fresno chiles, fermented for two weeks, then blended and adjusted for seasoning).

All the same basic flavors and techniques are there; they're just rearranged a bit to fit a restaurant menu and production schedule.

For the Kimchi Mayonnaise:

For the Spice Mixture:

To Cook and Serve: 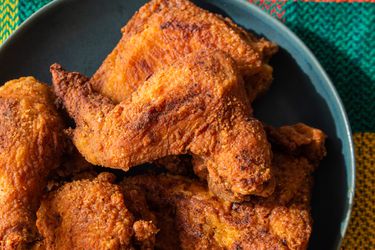