Fighting to save the cuisine of the Khoja Ismaili diaspora from erasure.

Bharazi, like most stews, is a simple, hearty dish. It starts with a savory base of onions, sautéed until golden, and chopped ripe tomatoes, garlic, and chiles (of course). Stir in a can of coconut milk and bring everything to a boil before adding pigeon peas—the star—and reduce the heat to a simmer. Ten minutes and a squeeze of lemon juice later, it’s ready to be spooned over rice. Or, for a real treat, serve the bharazi with the fluffy, lightly-sweetened coconut donuts known as mandazi alongside.

You’ve probably never heard of these dishes. You might wonder at their origins, whether they’re Indian, East African, or from some other country; you might also wonder at the combination of ingredients, which may seem odd to you. But you don’t have to wonder why you’ve never heard of it, since it has to do with power: who has it, and who its benefits are bestowed upon. Power anoints some chefs, celebrating their contributions to cultural memory and making their cookbooks canon, while simply ignoring others, even those who crusade against their erasure. Power decrees which cuisines will endure and thrive, and which ones will become extinct. And the odds are stacked against the Khoja Ismailis, the makers of the simple yet wholly original bharazi.

Khoja Ismailis are a sub-sect of Ismailis, the second-largest sect of Shia Islam, which has about 15 to 20 million adherents worldwide. The Khoja Ismaili community, founded by the 14th-century Persian missionary Pir Sayyid Sadruddin, hails from the Indian state of Gujarat, particularly from the Kutch region and the Kathiawar peninsula that juts into the Indian Ocean, attached to the rest of Gujarat on its northeastern side. But because of successive waves of emigration, the Khoja Ismaili “home” isn’t confined to India.

“Small numbers of Indians were going to the East African coast— Mozambique, Zanzibar, Mombasa-Malindi for centuries, due to the ancient Indian Ocean trade route,” says M.G. Vassanji, a Khoja Ismaili and two-time Giller Prize-winning Canadian novelist (and, full disclosure, my father-in-law). “A larger number began to arrive in the mid-nineteenth to early-twentieth century, prompted by droughts in Gujarat as well as opportunities to trade.” Famines in the late 1800s and early 1900s provoked a mass exodus of Khoja Ismailis to East Africa.

Vassanji was born in Nairobi and raised in Tanzania, and much of his work tells the stories of his people: of their origins in India, of the migration to their second home in East Africa, and of the Khoja Ismaili diaspora around the globe. And while many of the dishes the diaspora enjoys remain the same—like sweet thepla, the chewy, deep-fried, cookie-like treats made with wheat flour and evaporated milk, seasoned with fennel seeds, nutmeg, and cardamom—Vassanji’s work also describes how the cuisine changed. As people began to prosper, meat became more popular; coconut, found along the African coast, became a staple; and new dishes became household standards, like plantains stewed in coconut milk, the beloved bharazi, and macchi bhat, succulent halibut, salmon, or cod chunks marinated in lemon juice, chile, and garlic paste and pan fried, served with rice bathed in a spiced sauce of tomatoes and coconut milk. Cassava—mohogo—also became popular, most deliciously in the form of mohogo chips, sprinkled with chile powder, salt, and lime, and served in a newspaper wrapping, perfect for a family outing by the sea.

Sajeda Meghji, a cookbook author and the creator of the Khoja Ismaili food blog Chachi’s Kitchen, says, “Khoja cuisine had to adapt to local vegetables and fruit, like mohogo [cassava] and matoke [green banana/plantain].” She notes that ingenuity led not just to new dishes, but also compelled emigres like her mother, Amina Pyarali Meghji, after whom the blog is named (Amina went by “chachi,” or aunt) to become technically proficient at cooking. “In the 1920s, Chachi’s parents took a dhow to East Africa in search of a better life,” says Meghji, and Chachi was born in Bukandula, Uganda. “Women would cook everything from scratch—from chevro [a spicy mixture of fried lentils, rice flakes, and mixed nuts] to athanu [pickle] and papad—which is why Chachi and women like her were expert cooks.”

However, the Khoja community wasn’t able to make a long-lasting home in East Africa. In the early 1970s, Idi Amin, then-president of Uganda, riding a wave of ethno-nationalism, expelled much of the Asian population from the country and encouraged widespread brutality against them. Many Khojas fled, along with other East Africans of Indian descent, resettling primarily in the UK and Canada. Although some remained, the community had become fractured again.

Khoja matriarchs, now twice removed from the land of their ancestors, took their cooking westward. But this movement, the Western push for assimilation, and the tendency to conflate Khoja food with ubiquitously available Indian food, threatened to erase their unique cuisine. “Chachi’s Kitchen started as a way of preserving and sharing this important part of our heritage, especially for my nephews,” says Meghji.

Now sprinkled around the world, the diaspora congregate with community members to pray and mingle at Jamaat Khana. These gathering places, lovingly referred to as “Khane,” serve as temples and community centers, and they’ve helped to preserve Khoja Ismaili culture and cuisine. “There is a Khoja Ismaili tradition of sending the first portion of anything you cook at home to the Jamaat Khana,” says Vassanji. “This food is auctioned; the proceeds go to the Jamaat Khana.” The auction is called naandi, and is a sparkling affair. Auctioneers stand behind tables groaning under piles of food, firing off prices at lightning speed to the enthusiastic jamaat. Vassanji explains that rituals like naandi helped develop the cuisine (people became veritable experts at biriyani), burnishing the culinary reputations of talented mothers and grandmothers.

The late celebrated diaspora cookbook author Noorbanu Nimji, who died in June last year, cultivated her reputation at Khane. Nimji was born in Nairobi but fled to Calgary in 1976, one of about 40,000 East African Ismaili refugees taken in by the government of Prime Minister Pierre Elliott Trudeau. Nimji learned to cook with her mother and sisters-in-law, “at each other’s elbows,” as her friend-turned-collaborator Karen Anderson says. After getting a taste of her food at Khane in Calgary, people asked her to give cooking lessons. A delighted Nimji acquiesced, and started documenting her recipes with the help of her son, Akbar. “Before they knew it, they had a stack!” Anderson laughs.

Thus, A Spicy Touch—likely the first Khoja Ismaili cookbook—was born. Nimji published three editions, in 1986, 1992, and 2007. It is an unassuming tome, narrow, spiral bound like a notebook. But its 110 rose-colored pages contain a universe of memories and history, its maroon lettering standing defiantly against erasure. Recipes for elaborate undertakings like muthia—a hearty stew of meat, millet flour dumplings, and mixed vegetables, many of which have to be prepared individually—hitherto only passed along orally, now occupy two pages; diagrams for how to fold samosas replace the need to physically observe deft fingers encasing spiced vegetable, beef or chicken fillings in a supple dough. Published only in Canada, A Spicy Touch has sold over a quarter of a million copies. It’s a hallowed artefact of Khoja Ismaili culture, given to couples as a wedding present, or to children leaving home for the first time as a prophylactic for homesickness. Yet, Nimji’s relative anonymity outside of the community speaks volumes.

Khoja food has also gained footing in cities like Vancouver, where members of the diaspora have started restaurants that showcase their culinary heritage. Ashish Lakhani took over and renovated James Street Grill in Burnaby, a suburb of Vancouver. “We started off as a breakfast-brunch place, and evolved into an Ismaili restaurant,” he says. “We serve everything from biryanis to muthia, nayma choma [Kenyan-style barbecued meat] to paya [slow-cooked goat trotters in a soupy broth]. Indian restaurants don’t serve this type of food because it’s so hard to find trained Ismaili chefs. The chefs are really mothers and wives.” Lakhani has always been committed to serving East African-style Ismaili food, and benefited from hiring an Ismaili chef, Anand, who trained those who continue to work at the James Street Grill.

For most, however, Khoja Ismaili fare might as well not exist. It’s rarely written about and, aside from James Street Grill, I don't know of any restaurants dedicated solely to the cuisine. This problem of erasure isn’t just limited to Khoja food, either: With the notable exception of Ethiopian and Eritrean establishments, foods from East African countries like Kenya or Uganda are similarly ignored in the United States.

There are several reasons for this, many of them well-known. Power in the North American food industry largely lies in the hands of white people; many Americans aren’t clear about the distinctions between different subcontinental countries’ cultures, let alone their cuisines; for many American consumers, “Indian” or indeed South Asian food is synonymous with fetishized North Indian fare like buttery naan and kebabs. Restaurants that diverge from dishes like chicken tikka masala are likely to struggle financially.

But I think one of the biggest culprits is laziness. Grasping nuance requires work, and that requirement is the main reason a diasporic cuisine must struggle for independence and recognition. The seeming nebulousness of Khoja Ismaili food—even though it defies categorization, not definition—gets in the way of understanding the food. If it has dhokras and samosas it must be Indian. But then what is vithumbua or kuku paka? Facile notions of “authenticity” and traditionalism further complicate this.

Khoja Ismaili cuisine may be East African, it may be Indian, or it may be neither. Holding onto these contradictions protects the cuisine against appropriation, but also complicates the task of educating others about its unique virtues and combinations of flavors. Instead of trying to cram this cuisine into geographical boxes and erasing its complexities, I believe we must focus our attention on those who continue to practice it, those who can bring a creamy, coconutty bharazi to our stovetops. People like Sajeda Meghji and Noorbanu Nimji—the ones who carry the memories of their varied homelands on their tongues as they traveled across oceans, since their memory is the cuisine’s only armor against erasure. 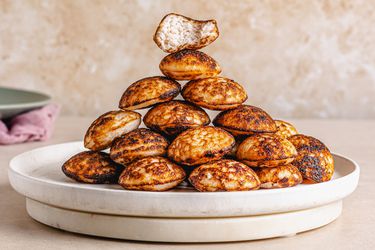 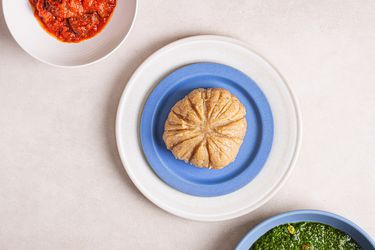