You've got your burgers and veggies and summery desserts ready, so you might think you're all set for your July 4th cookout, but you can't forget about salads. I know that a salad sounds boring compared to a loaded burger, but I promise that, when done right, it can be an exciting addition to your meal. To show you what I mean, we've rounded up 21 of our favorite Independence Day salads, from upgraded potato salads, pasta salads, and coleslaws to vegetable salads done on and off the grill.

The easiest way to improve a classic potato salad is to cook the potatoes right. That means starting the spuds in cold water so that they cook up evenly instead of winding up crunchy at the center and mushy on the outside. Once you've mastered the potatoes, you can start to think about dressing—here we go with a fairly standard mix of mayo, rice wine vinegar, sugar, mustard, and chopped cornichons.

Another trick to keep in mind when making potato salad is that you need to season the potatoes as they cook, so be sure to add salt and vinegar to the water (the vinegar also helps prevent the potatoes from falling apart). For this dill-packed potato salad we make the dressing with olive oil, vinegar, onion, and tangy sour cream.

Vegans deserve creamy potato salad, too. You could make a regular potato salad with vegan mayonnaise, but you can also make a creamy salad by dressing the potatoes with a vinaigrette thickened with the starch-rich potato-cooking liquid and mashed Yukon Golds.

Making a complete 180 from the previous recipe, this potato salad is neither creamy nor vegan. This oil-dressed salad is studded with smoky chorizo, both pickled and sautéed onion, and peppery arugula. For extra flavor we cook the potatoes in ultra-salty water and add aromatics like bay leaves and oregano to the pot.

Get the recipe for Fingerling Potato Salad With Chorizo, Onion, and Arugula »

I know I just got done telling you that it's crucial to boil potatoes correctly for a good potato salad, but what if I told you that boiling isn't the best way to cook them? My favorite potato salad recipe involves par-cooking new potatoes in boiling water, but calls for finishing them on the grill so that they crisp up and get infused with smoke. To double down on the smoky flavors, we grill the lemons for the vinaigrette, too, which softens their flavor and brings out their sweetness.

Yōshoku—Western food done with a Japanese twist—often bears a resemblance to the original while being distinctly its own. That's certainly the case with Japanese potato salad—it is made by dressing boiled potatoes with mayo, vinegar, and mustard, but the potatoes are mashed and packed with mix-ins like cucumber, carrots, red onion, hard-boiled egg, and scallions.

Coleslaw is an easy dish that is even easier to mess up. It might seem as simple as tossing raw cabbage with dressing, but that's a recipe for overly crunchy cabbage sitting in a pool of dressing soup. To do coleslaw right you need to purge the cabbage with salt and sugar after shredding, which both softens it and draws out excess water. Once the cabbage and other veggies are purged you can toss them with the dressing, in this case a 3:1 mixture of mayo and apple cider vinegar perked up with Dijon mustard.

So now you know the coleslaw drill, right? Thinly slice the vegetables, purge them of excess moisture, and then it's time to start thinking about a dressing. Here that means lots of tangy buttermilk, along with mayo, mustard, apple cider vinegar, and sugar. Some advice: I usually make coleslaw with a mandoline, but a food processor is a much faster way to slice a party-size batch of veggies.

This simple slaw is made with just half a dozen ingredients: cabbage, red onion, fresh mint and cilantro, Thai bird chilies, and lime juice (plus a pinch of salt). Cutting out the dairy keeps the salad super light, which is perfect for balancing out a heavy meal of grilled meats.

I consider myself a mayonnaise fan, but even I struggle to enjoy a macaroni salad that is little more than pasta and mayo. This recipe takes traditional macaroni salad and gives it a more balanced, complex flavor by adding sour cream, Dijon mustard, Worcestershire, and hot sauce. Macaroni salad can be one-note in terms of texture as well as flavor, which we avoid by mixing in crunchy celery, shallots, and scallions.

Not sold on even an upgraded mayo-based pasta salad? For something a little more refined, try this Spanish-inspired version sauced that incorporates smoky Spanish chorizo, tart pickled yellow onion, and piquillo peppers. Pasta firms up as it cools, so for a cold dish like this, be sure to cook the noodles a few minutes past al dente.

Pasta salad with raw tomatoes and basil is a summer staple, but we think the dish typically falls flat because pasta and raw vegetables are texturally at odds. To get the same flavors, we prefer to cook cherry tomatoes until they burst, using their juices to make a simple sauce. Herbs are an exception to our no raw veggies in pasta salad rule, so we keep the basil raw to preserve its fresh flavor.

We call this a pasta salad, but you could just as well describe it as a vegetable salad with some fresh Chinese wheat noodles thrown in. We pack the salad with tons of bell pepper, cucumber, bean sprouts, herbs, jalapeño, and scallions and toss it with a rich peanut butter-based dressing flavored with soy sauce, chili sauce, lime juice, sesame oil, garlic, and honey.

The best produce calls for the simplest preparations—by using the freshest in-season leafy greens and herbs that you can find at the market, the only other ingredients you need to turn them into a delicious salad are olive oil, lemon juice, and salt. You'll be amazed at how well this simple salad complements grilled mains.

Speaking of treating good ingredients with respect, I can think of no better celebration of summer produce than Caprese salad. It's not quite peak tomato season here in California, so I'll be looking for smaller cherry and grape tomatoes that are very good even in early summer. Beyond the tomatoes, you will also need to track down the best fresh mozzarella you can find and bring out your top-shelf olive oil and fancy coarse sea salt.

Snap peas aren't quite in season either, but if you can still find good ones then check out this bright, crisp salad that pairs them with charred radicchio (available year-round). We toss the peas with an intense dressing made with Greek yogurt, garlic-infused olive oil, chopped black olives, minced fresh dill, and olive brine, then add in the radicchio and finish with fried garlic chips and more dill.

I've always hated watching a grill burn out—the time when the fire is just cool enough that it can't sear a steak but isn't yet out completely is usually a waste of coals, but it doesn't have to be. One great way to use that leftover energy is to char some green beans and mix them with sliced radishes, scallions, and red peppers.

This salad uses the fire for both the veggies and the dressing—we make a vinegary romesco-like sauce out of grilled chilies, tomato, almonds, hazelnuts, and bread and serve it on a bed of grilled endive and spring onions. You often see anchovies in xató—to accommodate vegetarians and people who don't like small, oily fishes as much as I do, I serve them on the side.

Most great salads are packed with contrasting textures and flavors, and bean salads are no exception. In this case, that means pairing tender beans with crunchy radishes and Marcona almonds, bitter radicchio, and acidic pickled red onion, and finishing with a simple vinaigrette. This salad will work with just about any beans in your pantry, so don't feel like you have to seek out the orca beans pictured here.

In the past couple weeks farmers markets have become overrun with summer squash, and this salad is one of my favorite ways to use it. We make the salad by thinly slicing the squash on a mandoline and tossing it with fennel, dill, olive oil, and lemon juice. Once that's all combined, we gently mix in goat cheese—add it at the beginning and it will dissolve into an off-putting milky coating.

You don't see watermelon and feta salads much these days, but we never stopped loving this once-trendy combination of sweet fruit and salty cheese. Our take on the dish adds chopped mint and a little minced lemon zest for extra brightness. As with the goat cheese in our squash salad, we are gentle with the feta so that it doesn't overwhelm the rest of the ingredients. 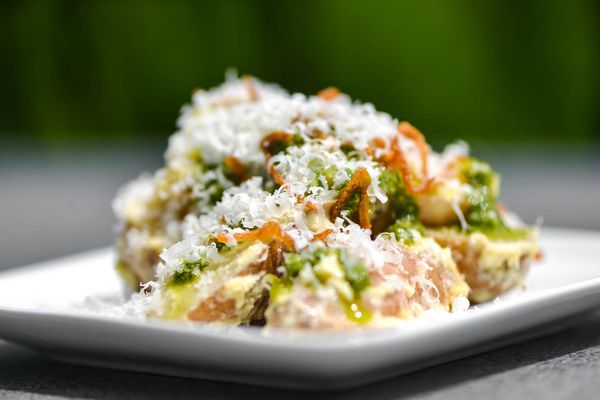 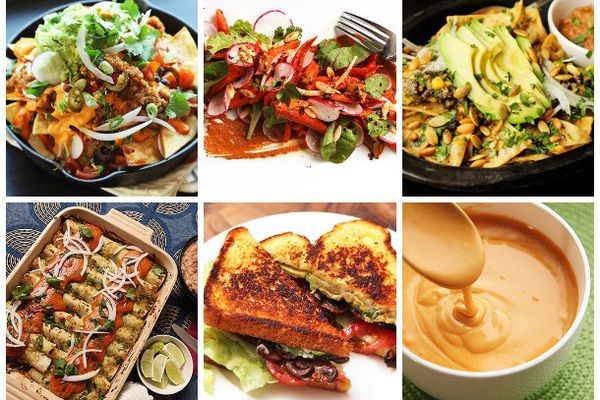