Jamaican food, like the nation itself, has its indigenous roots and has been heavily influenced over centuries by trade, colonialism, and the exploration era: You'll find influences from west Africa, Spain, China, and India. This stew reflects Jamaica and all it is, with indigenous habanero peppers and spices that originated around the globe. Started on the stove top and finished in the oven, it's a fiery meal best served with rice. Caramelized plantains would be great companions, too.

Take the time to properly brown the meat—it'll build depth as the dish slow-cooks. If you're concerned about the heat level, remove one of the habaneros or replace them with milder peppers, such as jalapeños or serranos. Unfortunately, the fruitiness of the habaneros will be lost. A splash of orange juice helps offset this, but the dish won't be the same.

The flavor of the stew improves the next day. Cool it down before placing it, covered, in the refrigerator. When you're ready to serve, gently reheat the stew on the stove top, garnish with green onions and serve with just cooked rice.

If you need to cut corners, prepared jerk seasoning paste is an acceptable substitute to the spices here. If you use it, omit the allspice, cinnamon, brown sugar, soy sauce, and steak sauce from the recipe. You'll need no more than a tablespoon or so of the paste, so taste as you go. 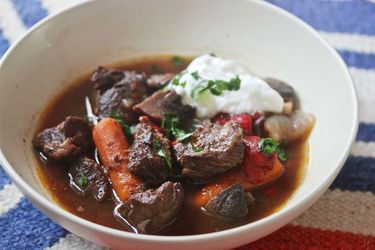 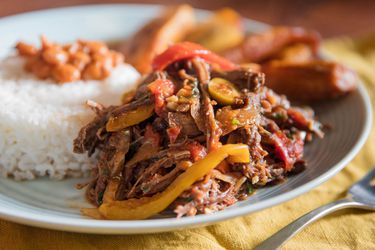