Pizza With Sausage and Radicchio

The first time I had radicchio on a pizza was about a decade ago in the old converted barn that my good friend and food writer Deborah Krasner calls home, up in Putney, Vermont. Her gorgeous kitchen is dominated by a wood-fired stone oven that she spent all day heating up to Neapolitan pizza temperatures while we were on the slopes. I still remember her exact words, because I didn't believe them at the time: "The leaves become just wonderfully sweet when they're roasted and charred," she said. In what was, at that point, my very limited experience, charring things always made them more bitter, not less.

"Luckily, she was right, I was wrong, and deliciousness ensued."

Luckily, she was right, I was wrong, and deliciousness ensued. We ripped up leaves of radicchio—those white cabbage-like bitter lettuces with the purple flames along their ribs—and placed them on top of a round of dough which we had spread with a bit of mozzarella. A drizzle of olive oil and a bit of sea salt and we slid the pie on into the 800°F oak-fired oven. I watched through the door as the leaves crackled and crisped, turning from white to beige and finally to brown, with a charred black fringe around the edges.

Like brussels sprouts, kale, or other brassica, radicchio develops an intense, nutty sweetness as it chars, complemented by its innate bitterness. It's crazy delicious and one of my favorite pizza toppings.

While chunks of Italian fennel sausage might be more recognizable in a bowl of orecchiette with bitter broccoli rabe, its sweet porkiness works beautifully with radicchio as well—particularly when you add it to the pie in raw chunks, its fat oozing out and seeping into the pores of the leaves and the cracks in the cheese. 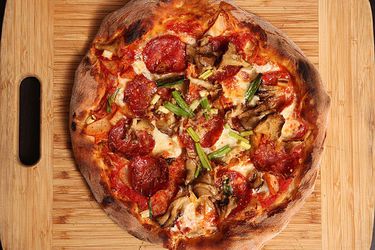