You West Coasters have it easy. Your dogs have yards to run in. Your grapes have vines to grow on. You get to watch the sun setting and the ocean at the same time. You're never faced with the tough decision of Motorino Brooklyn or Motorino Manhattan. Even the darn earth's rotation goes in your favor, letting you sleep three hours later than me every single morning!

And all that before we even mention In-N-Out, perhaps the second most compelling reason to move out west like my wife would like me to. (Reason #1 is the burger at Pie 'n Burger in Pasadena.)

I've been a rabid, if underexposed fan of the cult-ish fast food burger joint since I tried my first Double-Double (that's two patties, two slices of cheese) a couple years back. As burgers go, it's an oddity in my book, in that it's not about the beef. Salty, sweet, savory, soft, crisp, and fresh. "Overrated," people say? I think not. Let me quote the much more eloquent Nick Solares in saying "In-N-Out at the very least represents the platonic ideal of what a fast food hamburger should be."

But here's the thing: I've had my share of regular In-N-Out burgers, but never an Animal Style. That's something that needed to change, and stat.

Order the burger "Animal Style" off their not-so-secret menu, and you bring the party to a whole new level. The onion slice gets replaced with a dollop of sweet, darkly caramelized chopped onions, an extra stack of pickle chips goes underneath the tomato, and the patties get fried with mustard directly on the griddle.

Of course, the biggest problem with In-N-Out is that due to their commitment to freshness, they have a policy of never opening up a location that's not within a day's drive of one of their meat processing plants. For us East Coasters, that leaves two options: We lobby to put money into revolutionizing our ground transportation system and wait, or we get off our a*ses and try and make the darn things ourselves.

Option 2 sounded more fun to me.

Before I could begin, I'd need to get a good model to work off of.

The Mission: Get a West-Coast-only In-N-Out Animal Style Double-Double to my New York front door with less than 24 hours notice. There was only one man up to this job: I put in a call to my former MIT colleague Marios Assiotis. There are certain things that slightly nerdy Cypriot expats living in San Francisco and working for Microsoft are particularly cut out for.

Needless to say, he jumped at the excuse to hit In-N-Out. $120 in overnight delivery fees later, the UPS man showed up at my door at 9:30 the next morning, golden package in hand. Inside were two regular Double-Doubles, two Animal Style Double-Doubles, two plain cooked beef patties, two packets of Spread, and one large chunk of dry ice.

I knew that the flavor of a frozen-then-thawed burger could never compare to the freshness of the original, but nevertheless I felt compelled to resurrect them—not a minor feat in and of itself!

After a totally failed attempt at reheating one whole, I realized that the best way is to separate it into individual components, and reheat each individually, tossing the veg and replacing them with fresh ones. Within the hour, I had my lunch of Zombie In-N-Out burgers:

Delicious? Certainly. As good as real? Absolutely not. But still, as a research tool to base the rest of my fresh sandwich construction on, it was invaluable.

I never understood why In-N-Out refers to their sauce as "Spread". Maybe they're just a little too cool for school. In any case, all it is is a basic Thousand Island-style dressing: a mixture of ketchup, mayonnaise, and sweet pickle relish. But as anyone from the Thousand Islands will tell you, not all dressings are created equal. What's the exact ratio of ketchup to mayo? Are there other seasonings involved?

Now, gifted as I am with an extraordinarily delicate and precise palate, I could add a little of this and a bit of that until I'd achieved a good enough balance. But the inner nerd in me is always seeking ways to express itself, so I decided to take the mathematical approach.

* Full Disclosure: I completely forgot 7th grade algebra, spent 30 minutes trying to figure this out, then gave up and emailed my really smart wife.

To calculate the ratio of relish to ketchup, I washed two tablespoons of Spread through a fine mesh strainer, which got rid of the mayo and ketchup, but kept the pickle particles. Two tablespoons of rinsed Spread resulted in 1 teaspoon of strained pickle relish.

So the final Spread formula (rounded to the nearest convenient measure) was: 2 tablespoons plus 2 teaspoons mayonnaise (62 percent), 1 tablespoon ketchup (23 percent), and 2 teaspoons pickle relish (15 percent). Damning the math, I also decided to add a tiny splash of vinegar and pinch of sugar to round out the flavors before moving on to the next phase of the operation.

A regular Double-Double gets a full slice of onion in between two patties. Upgrade to an Animal style, and those onions come intensely caramelized, their sweet complexity playing perfectly off the beefy patties. We're talking onions slow-cooked to oblivion, French-onion soup style. They're melted into a near fondue-like consistency.

I've had some experience cooking onions, but my first try at these, done by simply slow cooking a fine dice of onions in a little oil fell miserably short. They were brown, but they still had a distinct, crunchy, oniony texture. I was cooking them over the lowest heat possible, but they simply weren't melting—they were threatening to burn before they sufficiently broke down.

Then I thought—if onion soup-like texture is what I'm after, why don't I use the onion soup method? I slowly caramelized onions in a little oil, then deglazed the pan with a little water and repeated this process several times, allowing the liquid to evaporate and the onions to brown further with each iteration. By doing this, the onions cool as they cook, allowing for slower caramelization, as well as distributing the browned sugars more evenly throughout the mix, improving texture and flavor.

In-N-Out has their buns custom made for the restaurant. I briefly considered baking my own buns for this process, but decided against it. I can bake a good loaf of bread, but I've never come across a recipe for a soft, squishy burger bun that's an improvement on the supermarket offerings. To my mind, a Martin's potato roll or an Arnold burger bun is the apex of its form.

I scanned the supermarket shelves with my frozen Double-Double in hand until I found a bun that matched it perfectly in size: Arnold it is.

The only issue was the In-N-Out buns are a little darker. A two-minute stay in a 400 degree oven (I used my toaster oven) solved that dilemma. And like all good buns, these ones get toasted—nearly burnt in fact. It adds a key flavor component, and helps solidify its structure, crucial to keeping the torrent of gooey juices at bay.

How Fatty's the Patty?

Next up: the beef. This was going to be a little bit tougher. All I knew so far from the In-N-Out Food Quality page was that the beef is 100 percent ground chuck and that it's never frozen. That leaves a lot of room for interpretation. How big are the patties? What's the fat ratio?

Well, sizing the suckers was no problem. I simply had my good man Marios ship a couple of cooked plain patties. They both weighed in at precisely 37 grams (1.3 ounces). Accounting for the standard 35 percent loss in weight for a well done thin patty, that kicks us up to 57 grams or exactly 2 ounces pre-cooking—that's 1/4 pound for a Double-Double. A nice, round number. The same size as a Shack Burger, by the way. And a Quarter Pounder, for that matter.

As for fat content, it was time to break out the math guns again. My goal was to figure out the amount of fat vs. protein in a single In-N-Out patty. The information Ifrom their Nutrition Guide:

By subtracting the value of a hamburger from that of a cheeseburger, we can calculate that a single slice of cheese contains 6 grams of protein and 8 grams of fat. Then, subtract the value of a cheeseburger plus the value of a slice of cheese from the value of a Double-Double, and you've got the fat and protein makeup of a single burger patty. It breaks down to 9 grams of protein and 6 grams of fat. Not accounting for both moisture loss and fat rendering during cooking (which in my experience is about equal), that leaves you with a 60 percent lean, 40 percent fat beef blend—a far higher fat percentage than any store-bought ground chuck. No wonder the things are so-darned delicious!

This meant only one thing: I'd have to grind the beef myself.

I went to the butcher and got the fattiest chuck steaks I could find and ground them without trimming away any of the excess fat.

And by the way, if any of you are still buying pre-ground beef, you should stop! Grinding your own meat is super easy, and is the single best way to give any burger an instant and gigantic upgrade in quality. Do it.

After carefully studying photographs and performing several meticulous autopsies on my frozen burger cadavers, I derived that the sandwich is built by first laying a mortar foundation of 2 tablespoons sauce on the toasted bottom bun, along with a layer of pickles slices for the Animal Style version. Next comes the tomato, followed by the lettuce.

As for the patties, Animal Style is described only as "mustard grilled," which in my book, is not all that well defined. For the complete rundown, I turned again to my spy network for support. I was almost immediately aided with photos and detailed descriptions from past and current employees.

The process is simple: Sear the patty on one side, and squirt some mustard on it as it sizzles. Flip the patty over so that the mustard cooks into the second side.

The patties are covered with cheese, then caramelized onions are applied liberally to a single patty before topping it with the second, fusing all the elements together into a single cheesy, beefy, sweet, oniony, gooey, salty, oozy, crispy, meaty, savory, melty, delicious mess. American food doesn't get much better than this!

So there I had it: my first taste of an honest-to-goodness, scientifically re-constructed Animal Style Double-Double clone. Would it compare with the real thing? Honestly, I didn't care—it was that good.

Indeed, the only thing I can think of that would improve this burger is if it were available across the entire nation or—dare I say it?—the world. Don't you just love the internet? 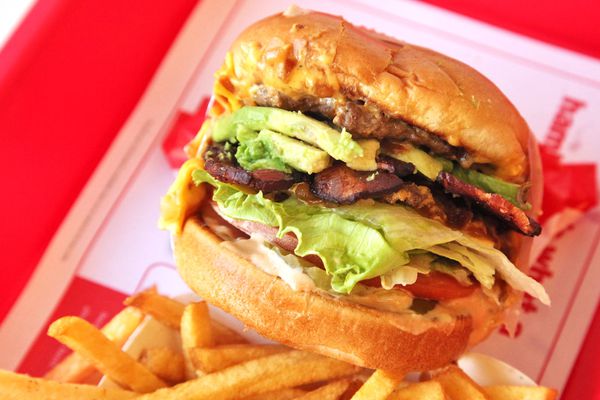 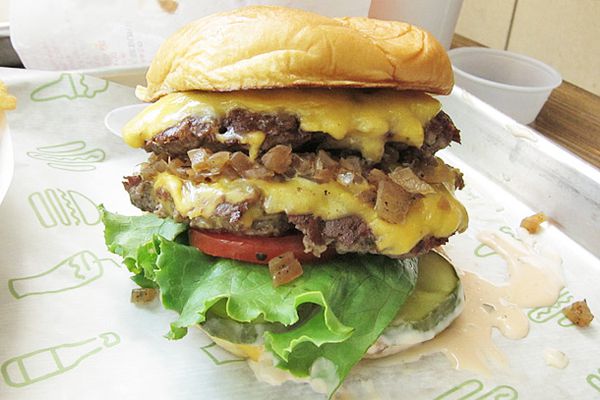