Ideas in Food: Use the Microwave to Make Lighter-Than-Air Rocky Road Sponge Cake

Microwave cakes have now become mainstream. Sort of. They were invented by Albert Adria. He used a whipped cream dispenser and a microwave to make almost instant light-as-air cakes. The technique has been adapted and adopted by chefs and home cooks around the world. It's a favorite of ours and we have formulated a number of recipes, from Danish to cornbread.

The problem? Each time we published a new recipe, a reader would complain about the use of the whipped cream canister. While many gear-heads and serious home cooks have one, they're just not as common as the food media would like us to believe. They also have their limitations: You can't make a microwave sponge cake with any sort of chunky inclusions when using the canister.

We decided that there had to be a way to make these cakes without using the gadget.

We thought about soufflé cakes, how the had a similar light and airy texture, though they are softer and less stable than the microwave sponge cakes. Souffle cakes are lightened with whipped egg whites. So we set about making a microwave cake using a hybrid meringue as our leavening. Alex had a craving for Rocky Road so we decided to use that as the flavor base giving us the extra challenge of how to add inclusions like marshmallow, toasted nuts, and chocolate to the cake while changing the base recipe.

To make our cakes, we start by toasting walnuts in the microwave. It's a really easy method and results in more even toasting than on the stovetop and is faster than toasting in the oven.

Next, we melt a combination of dark and white chocolate by running it in the food processor, letting the heat of friction do the work for us.

A little bit of peanut oil adds some tenderness to the cakes and brown sugar lends flavor as well as some moisture-retention properties.

Next we add flour, cocoa powder, salt, and powdered egg whites to the base and blend it up again.

Finally, 3 egg yolks, milk, and a splash of bourbon get blended in until a fully smooth batter is formed.

After making this rich batter, our plan was to fold it into a whipped egg white mixture for leavening.

In the process of testing this we discovered something really interesting. Our first round of cakes was seriously dense, until we folded in miniature marshmallows. When we microwaved the cakes with the marshmallows, they expanded and pushed the rising cake batter up and out of the cups. They provided steam leavening and created huge holes in the finished cake. Not ideal results, but really interesting and worth exploring.

We adapted this idea and instead of using whole marshmallows and nuts, we decided to pulse some into the batter to chop them up a little more finely.

The inclusions add gooey texture, sweet flavors, and additional leavening. Turns out that the miniature marshmallows are the macro-leaveners in our micro cakes.

The rest is pretty straightforward. We whip a few egg whites in a stand mixer until frothy, then we add some powdered sugar and keep whipping until stiff glossy peaks form.

To this we add our chocolate base...

...and start very gently folding it in.

The key here is to combine the two elements without deflating the whipped whites—the inclusion of plenty of air is what keeps these cakes light and tender.

The very best part about these little cakes? They don't require any special baking equipment beyond little paper cups. To bake them, just poke a hole in the bottom of a paper cup along with three small holes around the perimeter for venting.

Pour the batter into the cup, and microwave them for just 45 seconds.

They come out light as air, puffy, and moist, and while they're great eaten hot out of the microwave, we actually think they have the best flavor when eaten at room temperature. 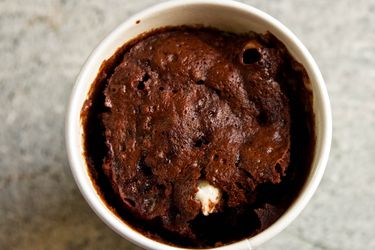