I'm a fan of goulash in all its forms, and there are many. There's the American dish of ground beef, tomato sauce, peppers, and pasta—a dish that I knew as American chop suey while growing up in the Northeast. Then there's the classic Hungarian version, with small cubes of beef or pork in a brothy, soup-like stew flavored with paprika. But in the winter months, the version I'm after is the rich, hearty, rib-sticking Hungarian-American version, made with big chunks of beef, carrots, and potatoes in a stew flavored with onions, garlic, peppers, and plenty of great paprika.

Once you realize that, technique-wise, there's not a huge difference between goulash and beef stew, it's a pretty straightforward preparation. I go deep into the new rules of beef stew in this article, but here's a quick summary of the most important techniques:

With those basic rules in mind, the rest is merely a matter of adjusting flavoring.

To start, I sear the beef in a Dutch oven with a little oil, then add diced carrots to the pot, cooking them until lightly browned. I set aside both the beef and the carrots for later. Next, I add thinly sliced onions and red peppers to the pot, sautéing them until they've softened. I considered using Hungarian peppers for this, but they can be pretty difficult to find (feel free to use them in place of the bell peppers if you can!). In one Cook's Illustrated recipe (paywall), the author suggests using a can of roasted red peppers that have been puréed. It's an interesting idea, and the stew tastes good, but roasted red peppers have a very distinct flavor that comes through even with all the other flavorings I add down the line. Fresh peppers are the way to go.

I also add a couple of celery sticks and carrot sticks (both will get fished out later on).

Next up, the paprika. From my testing for chicken paprikash, that other Hungarian classic, I knew that the quality of the paprika would be of utmost importance to a dish like this, where there are really no other major flavoring elements. Many recipes I've found for goulash call for a meager few tablespoons of paprika. Tasting the dish when it's made with your typical supermarket-grade paprika makes me understand why: It's not a flavor you want a lot of.

Really great paprika, on the other hand, you want a lot of. I use a full half cup for my stew. If you have a local spice importer, buy your spices there fresh. If not, you can order them online from Penzeys, the best source I've found for real Hungarian paprika.

After the paprika goes in, I add a quart of chicken stock into which I've dissolved an ounce of gelatin. Next are my umami bombs: in this case, soy sauce and fish sauce (though Marmite or anchovies would also be great). Bay leaves and thyme also hit the pot.

Now back to that beef. Once it's rested a bit, I cut it into cubes for the stew. Meat for goulash is typically cut quite small—as small as half-inch cubes—but I prefer to use larger chunks, as I find it easier to manage their texture as they cook. (Plus, there's something very satisfying about breaking into a spoon-tender chunk of beef in a bowl of stew.) I toss the cubed beef with a little bit of flour, then into the Dutch oven it goes, along with any accumulated juices.

With all my ingredients added, I set the stew in a 275°F oven to cook, with the lid of the pot slightly ajar. An hour and a half in, I fish out the spent carrots and celery stalks and replace them with the sautéed diced carrots I've set aside, along with some cubed Yukon Gold potatoes. Once those vegetables have softened (with a little luck, that happens exactly as the meat achieves ideal tenderness), I remove the pot from the oven.

I prefer my stews to be rich, but not stodgy—I want them to flow on the plate with plenty of brothy liquid—but, if you like your stews a little thicker, you can get there by rapidly reducing the stew on the stovetop right at the end of cooking. In any case, you'll want to skim off any excess fat that's accumulated on the surface.

A splash of cider vinegar helps brighten up the flavor, as does a sprinkle of parsley. 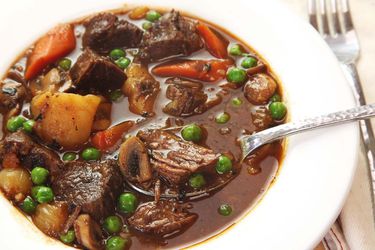 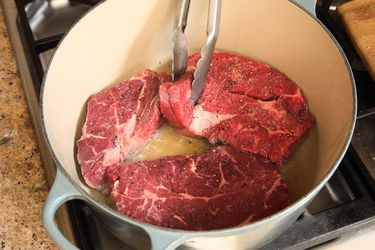 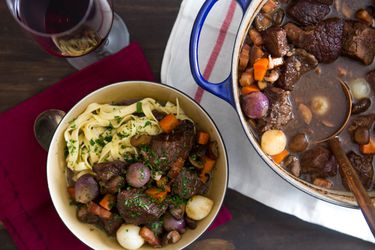