Get the most out of each thread of saffron by using one of these three methods.

When I was growing up, I used to love watching my mother add saffron to dishes. She treated each stamen with all the respect such a precious commodity deserves—starting with giving the spice monger the third-degree in order to ensure the spice's quality and ending by adding every last drop of steeped saffron tea to her goat biryani or kheer. Tending to saffron with care is a time-honored family tradition: My grandmother would even store her saffron in a locked cabinet, safely tucked between her wedding jewelry and passport.

The stamen of the temperamental crocus is so highly regarded that it has been cultivated and traded for millenia. Each vibrant purple flower blooms one week out of the year and produces just three stamens, which are still picked by hand—hence the steep price saffron commands. (For more information, check out our guide to shopping for saffron.)

Thankfully, when used properly, a little saffron can go a long way, so it’s not as much of a budget-breaker as it seems.

Different recipes and dishes will call for various ways to incorporate saffron. Here are the most common means of adding saffron to a dish, so you can decide for yourself what works best for your recipe.

Just keep in mind that saffron is similar to a dried herb, in that it needs heat and hydration to draw out all of its aromatics, not to mention its rich golden color—tossing a couple of threads into a salad or a sheet tray of roasted veggies won’t get you far. Use one of the methods below to get the most out of every strand.

Also, much like any dried herb or spice, saffron doesn't have an indefinite shelf life. To get the most color and flavor out of your saffron, try to use it up within one year of purchase. Older saffron will begin to lose its flavor and color, and grow brittle—so use it or lose it!

Grind Saffron Into a Powder

Ground saffron is most often called for in Persian recipes, such as the crispy rice dish called tahdig and many polows (layered rice dishes) and stews. It’s also my favorite way of utilizing saffron for any dish, so I tend to adapt recipes to incorporate saffron using this method, from a heady saffron and honey ice cream to these lemony chicken thighs.

Packets of already powdered saffron are available for purchase, but because you can never truly know what’s in them, it's always best to grind your own. I start by grinding a fat pinch of saffron threads in a small mortar and pestle. Once the threads have begun to break down, I add a pinch of sugar, which acts as an abrasive, to reduce the saffron into a fine powder. Though you can use salt in its place, sugar is the more traditional abrasive since it has less of an impact on the final seasoning of a dish.

Once the saffron is ground, I dissolve it in a couple of tablespoons of hot water, which instantly becomes densely aromatic, taking on a deep sunset hue. This liquid is ready to add to a dish at any stage, but I like to take a cue from my mother, adding most of the saffron-infused liquid early on and holding on to a few drops for a finishing touch.

One of the most common ways of adding saffron to a dish is to first steep it in water, like a tea. This is an easy method that requires nothing more than time and heat. I start by roughly crumpling the stamens between my fingertips before covering them with a couple of tablespoons of warm water or milk.

I use boiled water that has had a moment to cool just slightly to draw out the best aromatics and color from the saffron while minimizing any bitter or metallic flavors. I treat saffron much like matcha tea, brewing it in water between 160°F (71°C) and 170°F (77°C). After fifteen minutes of steeping, the liquid will grow deep orange in color and is ready to add to a dish at any stage.

Recipes that use a lot of liquid and take some time to cook can coax out saffron’s flavor and color without the need for a blooming step. With just a pinch tossed in and with no additional prep, dishes like risotto alla Milanese and bouillabaisse have enough liquid and simmering time to draw out saffron’s subtle flavors.

The key is to add the saffron early on, allowing it enough time to bloom in the cooking liquid. Some recipes also call for an early step of dry toasting or oil toasting the saffron first, which makes the stamens more brittle, so they break apart in the stew or paella.

Armed with these three methods of adding saffron to dishes, there’s no reason for saffron sticker shock. Even though it’s a pricey addition, you can be sure you're getting the most out of those stamens with a little hydration and time. 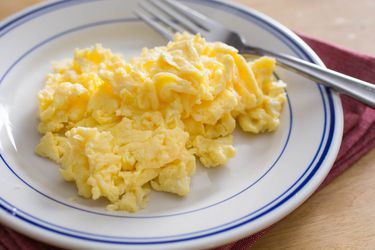