Who doesn't love roast chicken? Crackly, crisp, salty skin. Moist tender meat. Deep aromas filling the house. Little bits of fat and meat to tear off with your fingers and teeth as you linger over the the last sips of your whiskey (whiskey goes with chicken, right?). It's about as classy and classic as food can get, and my go-to meal for company.

You see that perfectly golden-brown beauty above? Well here's what's really going on.

The problem is one I'm sure everyone here has experienced: dry breast meat. And at first glance, there seems to be no way around it. With a chicken, there are two factors that inevitably conflict with each other.

So the question is, how do you cook legs to 170°F without taking the breasts beyond 150°F? I'm going to go ahead and give away the answer here: Butterflying.

Why does this work better than any other method? Well let's first take a look at some of the other "fixes" I've experimented with in the past:

Brining the bird (which we've already discussed in relation to turkey) by placing it in a salt water bath for a few hours helps a bit. It loosens up muscle fibers, allowing them to retain more moisture as they cook, and giving you a slightly expanded moist temperature range for the breasts.

The problem? Well, first off, it's fussy. Secondly, it soaks the skin right through to the skin* ruining its chances of attaining crispness (and let's face it, what's a roast chicken without crisp skin?). It also tends to dilute the flavor of the bird. Not so bad for robust turkey, but mild chicken needs all the flavor it can muster.

*Bonus points for anyone who can name that reference. Hint: classic 1960s comedy.

Salting (or "dry-brining") the chicken is a better solution. It works much like brining does, but rather than use a water and salt solution, you instead rub salt directly onto the meat and and skin of the bird and let it rest uncovered in the fridge for a few hours (or overnight).

Initially, the salt draws moisture out through the process of osmosis. It then dissolves in this liquid, creating a concentrated brine, which eventually gets reabsorbed. So you get the benefits of the brine, without watering down the flavor of the chicken. It also doesn't saturate the skin the way a wet brine does. Sounds great, but it's at best a buffer, keeping the breast meat a little moister, but still far from optimal.

I've seen it mistakenly suggested that barding or basting by draping the chicken with a fatty meat like bacon or spooning melted butter or pan juices over the top as it cooks will help it stay moist. The theory is that some of the fat will get absorbed into the breast meat. Poppycock. That breast is shrinking, and it ain't absorbing nothing!

As much as I love most things wrapped in bacon (yes dear, I'm talking about you), bacon makes the chicken taste like, well, bacon. And if I wanted bacon, I'd cook bacon. It also precludes the possibility of crisp skin.

Basting with hot pan juices not only increases the rate at which it cooks, exacerbating the dryness, the moisture content in it (or in melted butter, for that matter—about 18%) also keeps the skin from crisping properly. It's much better to brush it occasionally with oil (or rendered duck or chicken fat if you want to get fancy) as it cooks, which can help the skin brown more evenly, but does nothing for the moistness issues.

At the very least, if you're going to cook a whole chicken, you ought to truss it, like the chicken in the photo at the top. What's the point there? Well, it plumps up the breast meat a bit, making it thicker. Thicker food takes longer to cook, so that keeps the temperature of the breast meat down a bit. It's the method Thomas Keller recommends, and was my go-to method for a while. But it's still not perfect, and I found myself often having to choose the lesser of two evils between dry breast meat or chewy thighs.

So far, all these methods are at best Band-Aids. They don't address the root of the problem. In order to perfectly cook chicken, you must find a way to cook it such that the breast meat comes to 150°F just as the legs reach 170°F. Performing fancy acrobatics in a roasting pan, flipping the bird (both figuratively and literally when you get splattered with hot chicken juice) three or four times so that the legs get exposed to the bulk of the oven's heat works, but there just has to be an easier way, right?

I've since switched over to butterflying the bird, and have always been impressed with the results, but it never occurred to me why it works so well until I accidentally burnt a tray full of breadcrumbs the other day. This is what they looked like:

Turns out that as the hot air rises from the bottom of the oven, the wide sheet pan creates eddies in the convection currents, causing whatever's at the edge of the pans to cook a little faster than the center. Now with a quick cooking item like, say, a cookie, this isn't much of a problem. But leave your breadcrumbs in the oven for a full thirty minutes, and you see it beginning to express itself.

Notice the center of the pan is much blonder than the dark, burnt edges? And notice how that blond spot is suspiciously breast-shaped?

Butterflying the chicken allows you to take advantage of this uneven cooking. By cutting out the spine of the chicken (perfect for making quick jus as the chicken roasts!) and flattening the carcass, you can arrange it in the pan such that the breasts lie right in the cooler center, while the legs sit closer to the edge of the pan, where they are exposed to more energy.

The result is a bird that cooks exactly the way you want it. Blast it in a hot oven (I'm talking 450 to 500°F here), and you'll find that miraculously, the breast will reach 150°F just as the legs reach 170°F and the skin reaches delicious. No brining, no salting, no flipping, no problem.

Of course you do lose the prettiness of brining a whole trussed bird to the table for carving, but you gain the vastly preferable prettiness of perfectly cooked meat instead, and that's a trade-off I'll take any day. 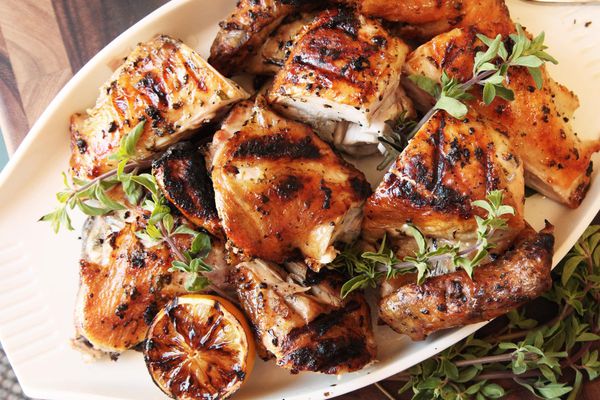 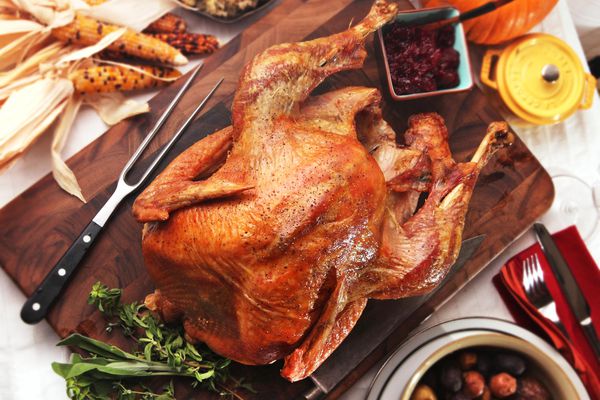 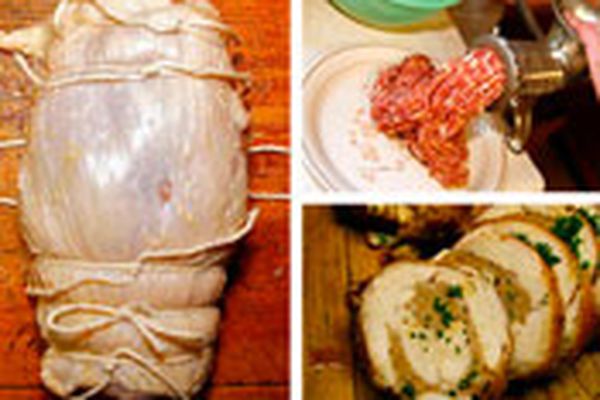 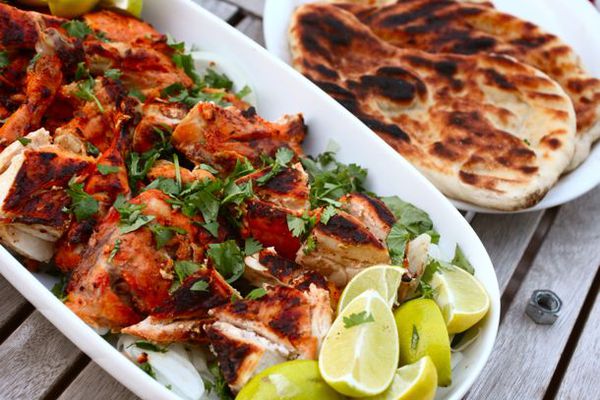 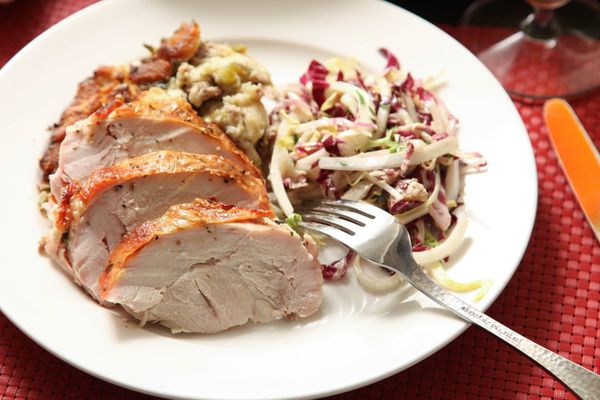