See, we've been having a lot of success here at Serious Eats in recent months with the cold-start poaching method, in which the food is added to the pot while the water is cold, then gently brought up to temperature and cooked just to the desired doneness. It works wonders for shrimp, whether in salads or in a classic shrimp cocktail, and it makes a much tenderer and juicier poached chicken breast.

But when we poach, we don't want our meat and fish to brown, so high heat, even as high as boiling water, is unnecessary. And not only is it unnecessary, it's counterproductive, causing the meat's proteins, especially those near the surface, to tighten and become tough. If my chicken is perfectly done at an internal temperature of 150°F, and my salmon is ready at 115°F, exposing them to simmering- or boiling-water temperatures is well beyond what's required. This is, in essence, the primary idea behind sous vide cooking, in which food is cooked to precise temperatures in a carefully controlled water bath.

With that in mind, I changed tack, lowering my salmon fillets into the cold court bouillon and then heating it up from there; I tried to keep the poaching liquid temperature below about 170°F the whole time, just by regulating the heat. Meanwhile, in the other pot, I steamed the salmon as planned. I removed all the fish when it registered 115°F at the center and let it rest for five minutes.

After that, you can eat the salmon right away while it's still warm, let it return to room temperature, or even serve it chilled from the fridge. A simple sauce, like the yogurt and dill one pictured here and included in my recipe, makes for a very quick, easy, and delicious meal. 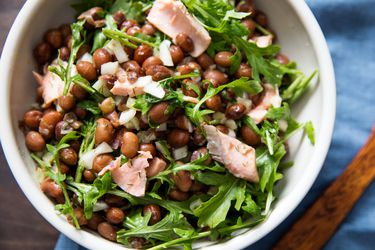 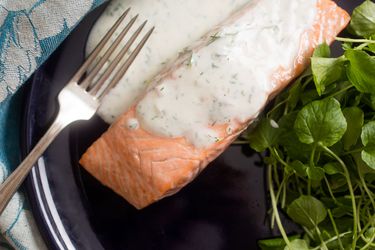 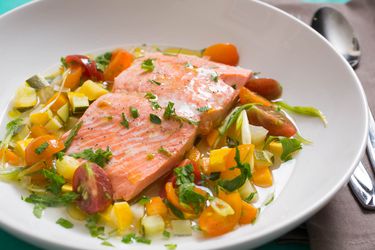