Peeling and dicing fresh tomatoes is a great technique to know for when you want those tomatoes to melt into a sauce or a soup (such as my minestrone soup), if you plan on canning them whole, or if you're making a very delicate tomato sauce where seeds would ruin the texture. It was one of the first techniques I learned at my first Italian-restaurant job, and one that I performed nearly every single day. It's especially useful this time of year, during prime tomato-canning season.

How to Peel, Seed, and Dice Tomatoes

Everybody knows the old "score an X in the bottom and blanch them" method, and it works well if you're making a big batch of sauce or canning a large haul of tomatoes. But when I've got only a few tomatoes to peel for a recipe, it feels like a waste of water, time, and energy. I'm going to show you two alternate approaches that are faster and more energy-efficient when you have just a few tomatoes to peel.

If You Have Many Tomatoes: The Blanching Method

If you're working with a lot of tomatoes, blanching them in boiling water is still the simplest way to peel them.

To do it, start by scoring a small X on the bottom of each tomato, using a very sharp paring knife or chef's knife. This gives you an easy access point for pulling off the skin later. Most of the time, a small X works just fine, but if you've had trouble with especially sticky skins in the past, scoring along the entire side of the tomato is a good way to guarantee easy-to-peel skins. If you'd like, you can also remove the stem end from the tomato at this stage, though if you plan on dicing the tomatoes afterwards, you can wait until later on.

Bring a large pot of water to a boil, add your scored tomatoes, and cook them just until you start to see the skins peeling away near the scored sections—about 30 seconds. Immediately transfer them to a bowl of cold water, using a spider or strainer.

I used to use ice water for this step, but after testing it side by side with plain cold water, I found that ice is really not necessary so long as you aren't completely crowding the bowl of cool water.

Once the tomatoes have cooled a little, the skins should rub right off with minimal effort.

If You Have Only a Few Tomatoes: The Torch Method

If you're peeling only a couple of tomatoes, a faster way is to use an open flame; either a gas burner or a torch will do. Score the tomatoes just as if you were blanching them.

To use a gas burner, set it on high, then, using tongs, hold the tomato directly over the flame, rotating it until every surface has been very lightly charred. This will loosen the skins, allowing you to easily peel them under running water or in a bowl of cool water.

If you've got a blowtorch in your kitchen, that makes things even easier. I use an Iwatani torch head, which fits onto inexpensive butane canisters and produces a flame that's more intense than even a standard propane torch.

Place your tomato on a heatproof surface—I use a carbon steel or cast iron skillet, placed either on my stovetop or on a folded kitchen towel on the counter—then torch it all over. The heat from the torch will cause moisture just under the surface of the tomato to convert to steam. The expanding gas will cause the skin to rapidly separate.

Just like the flamed or blanched tomatoes, torched tomatoes will peel easily under cool water.

All of these methods will work, but, of course, if you've got a food mill, peeling tomatoes for sauce is entirely unnecessary—you can just cook them, skins and all, then pass them through the mill to strain out the skins as you purée, as Daniel does in his Best Fresh Tomato Sauce recipe.

How to Seed and Dice Peeled Tomatoes

There's plenty of good flavor in tomato seeds, but sometimes you want to remove them for a smoother texture. Start by splitting your tomatoes in half lengthwise, then cut each half into quarters.

Working with one at a time, hold the tomato filet with the seed side facing up. Use your knife to carefully slice out the pale flesh from the interior, taking the stem end along with it. If any seeds remain, push them out with your fingertip. Now cut each seeded tomato filet into strips lengthwise, then rotate them and cut them into fine dice.

Make sure you save those interiors and seeds; they still have plenty of juice and flavor! To make the most of them, toss them with a bit of salt and place them in a strainer set over a container to catch the drippings. These juices are great for sipping on their own, as the base for a delicious fresh-tomato vinaigrette (just whisk them with olive oil and season with salt and pepper), in place of stock for vegetable soups, or—my favorite way—spiked with some vodka and served deeply chilled.

And if you want to go the extra mile, you can transform those skins into a delicious tomato skin powder to use as a garnish, or to rim the glass for that tomato water cocktail. 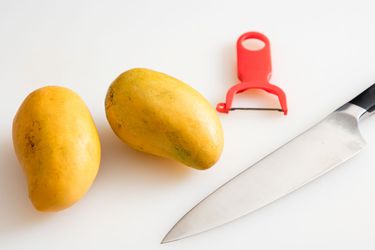