Beer and dessert can be great friends. Chocolatey, caramelly, coffee-like and fruity flavors abound in your favorite bubbly beverages, and the potential for matching flavors opens the door to some seriously killer after-dinner pairings. Of course, pairing drinks with any food isn't as simple as just matching flavors—there are other elements at play that can gloriously make (or disastrously break) the match.

Here are a few things to consider.

The #1, can't-forget-it, most important thing to evaluate when pairing beer with dessert is sweetness. The sugar in your dessert affects your perception of the beer you drink alongside it. A sweet dessert can throw a beer out of balance.

If the dish is perceptibly more sweet than the beer, it will taste starkly so when paired. Alongside a sugary dessert, the beer now tastes comparatively dry, and flavor elements previously held in check by sweetness light up and sit on your palate in an ugly way. Bitterness, alcohol, and acidity suddenly become more aggressive and can ruin a well-intentioned pairing.

Bottom Line: Be sure that the beer you choose is as sweet as—or more sweet than—its accompanying dessert to avoid disastrous taste interactions.

An often-repeated rule suggests that the beverages served with a multi-course meal must increase in intensity as the meal progresses. The theory is based on the idea that backpedaling in intensity will leave the beverage tasting weak compared to its predecessors. The result is that we often see desserts served with monster beers.

There's certainly validity to the concept, but in execution, these pairings can fall flat. Barleywine, imperial stout and double IPA seem to find their way as meal-ending palate-crushers more often than is appropriate. They can work, but these beers are best reserved for the richest, fattiest, most mouth-coating of desserts. Imperial stout, for example, is classically paired with flourless chocolate cake. This pairing is brilliant: the dense, fatty, richness of the cake is enough to protect the palate from the aggressive bitterness and alcohol of the beer while the flavors seamlessly integrate. But keep that same imperial stout away from a plain piece of very dark chocolate—while the flavors may integrate, the harsh boozy flavors of the high-alcohol beer will dominate without a lot of palate-coating fat.

Bottom Line: When in doubt, pair desserts with beers that have a bit less bitterness and alcohol than your intuition might suggest.

Let's put these tips to work.

For something a little less obvious, look for beers with fruity or caramelly flavors that complement the chocolate in the dish without necessarily mimicking its flavor. Doppelbock is a great place to start—the deep toffee and dried plum character of Ayinger's Celebrator, for example, works fantastically with chocolate desserts that don't require a ton of cutting bitterness or alcohol for balance. Belgian strong dark ales can work well here too—a beer like Het Anker's Gouden Carolus Cuvée Van de Keizer Blauw carries enough sweetness to match just about any dessert and is absolutely loaded with deep, dark fruit syrup character that tastes great with chocolate desserts—especially when they contain an element of fruit to bridge the flavors.

Yeast is your friend when it comes to fruit-based desserts. Esters produced by many yeast strains offer a slew of fruity flavors that can connect beer and food.

Expect to find fruity yeast flavor in Belgian abbey ales (watch out for that alcohol!), witbier, German wheat ales and some English ales. The banana and clove flavor profile found in hefeweizens, dunkelweizens and weizenbocks, for instance, works phenomenally well with fruit desserts. Sweeter dunkelweizens, like Weihenstephan's Hefeweissbier Dunkel, are a wonderful match to a not-too-sweet apple pie. The acidity of a clean sour ale like Ritterguts Gose can perk up the fruit flavor in a dish like a less-sweet panna cotta with fruit sauce. Nut and fruit based desserts can be fantastic with a brown ale like Tilburg's Dutch Brown, which has a pleasant raisin and fig-like character alongside a malty nuttiness.

Of course, there are always fruit beers. The bane of many a serious beer drinker, sweet beers with added fruit can make for great dessert pairings. Dogfish Head's Midas Touch contains Muscat grapes and saffron and is too sweet for many on its own, but it's one of my favorite beers for dessert pairing. Try it with lemon pound cake and leave a comment here to thank me later.

Caramel and toffee-based desserts can be tricky, as they are often extremely sweet. Very sweet, similarly caramelly beers are a safe bet to match—especially if the beer carries enough depth and complexity to keep things interesting. Sticky toffee pudding can be a real pairing challenge, but a dense, sweet English barleywine like J.W. Lees' Lagavulin barrel-aged Harvest Ale is incredible. Smoky, golden raisin-like and with a whole lot of toffee flavor to match the dessert, it works on all levels.

Every beer and every dessert has a different level of sweetness, and this makes pairing especially difficult. While the above suggestions will get you on the right track, it's really in your hands—pairing possibilities extend far beyond what's covered here.

A keen taste memory helps when you're thinking about any pairing challenge—if you want to find unexpected dessert-and-beer matches, take notes and pay attention when you're drinking those especially-sweet beers. The right dessert pairing may be hiding there, just waiting for you to discover it. 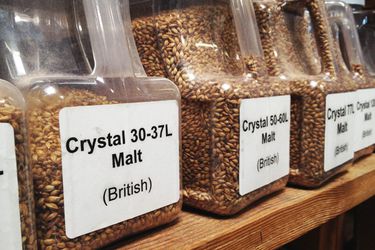