This burger idea started with a variety of Tibetan momo I've been buying from a food truck in my neighborhood of Jackson Heights, Queens. The Himalayan dumplings are stuffed with beef that's lightly seasoned with Sichuan peppercorns, a spice that, until eating those momo, I was more likely to pair with lamb, since I love the way its tingly heat plays with lamb's gamey, mineral flavor.

Now I'm convinced that the peppercorns work just as well with the more mild flavor of beef—this isn't entirely revelatory, since there are plenty of beef dishes in Sichuan cuisine, but it's changing the way I've been thinking of the spice at home.

One of the first things I wanted to do was pair beef and the peppercorns in a burger,* since it's a food that lends itself to the layering of flavorings and condiments. The biggest difference is that, in the case of the momo, the salt and spices are mixed into the ground meat, forming a more sausage-like texture, while in the case of these burgers, I wanted to maintain a looser structure—that meant handling the ground beef as little as possible and salting the patties just before cooking. To make sure the spices don't burn during cooking, I sprinkle on the spice mixture towards the end of cooking.

It's worth pointing out that this recipe would also make a killer lamb burger, for those who want to try it that way.

To start off, I made a spice blend of Sichuan peppercorns, cumin, red pepper flakes, fennel, and anise, toasting the spices first to release and develop their flavors, then grinding them in a mortar and pestle (though a spice grinder works too). Some brown sugar mixed in helps balance the chili heat.

I also made a batch of Kenji's awesome, and incredibly simple, cucumber pickles, which are quickly brined in a mixture of rice vinegar, water, salt, and sugar.

For a saucy condiment with a little punch, I blended mayo with chili paste, plenty of grated ginger, and a little rice vinegar for tartness.

Once I had that set, I took my ground beef, in this case some chuck, and formed it into six-ounce patties, seasoning them with salt and pepper right before putting them into a ripping hot cast iron skillet. A hot grill would be just dandy too.

Pressing a small dimple into the surface of each patty helps maintain its shape by preventing it from seizing up into a ball as it cooks, as large patties are wont to do.

Then I cook the burgers, turning as often as I please, until they're nearly cooked through and very browned and crisp outside. Only then do I add the spice mixture, sprinkling it liberally all over the patties.

Just look at the crust on these babies.

I decided to serve these on toasted English muffins; their heft and sturdiness remind me of the griddled, yeasted pancakes that Chinese street food chain Xi'an Famous Foods uses on their cumin lamb burgers, and the breadiness works well with the chili mayo and pickles. Consider it a taste of home, if home is the streets of Xi'an or Jackson Heights. 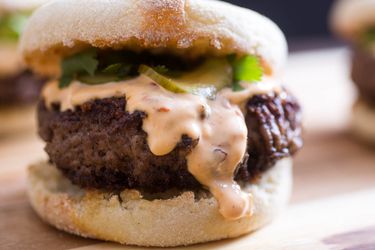 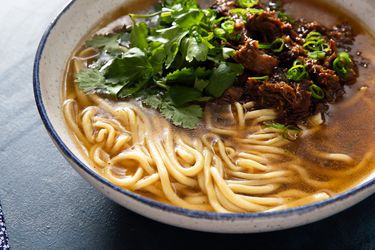