When you cook as a couple, you have to constantly deal with what each person does and doesn't like to eat. One of us (Matt) loves mushrooms, though, admittedly, mostly fried up English-style for breakfast; the other (Emily) used to dislike them, finding them to be either chewy, slimy, rubbery, or otherwise unappetizing.

We eventually realized that the problem wasn't with the mushrooms, it was how we'd been cooking them. We'd been treating mushrooms like most other vegetables, when we really should've been cooking them like meat. By searing mushrooms until deeply browned, you can bring out their earthy, meaty, umami-packed flavor, while their interiors remain tender and juicy. Now, we have no conflict—we both love mushrooms and work them into our meals all the time. Here, we toss them with baby kale and a flavorful sherry vinaigrette to make an easy, filling salad.

The key here is to develop a really good crust on the mushrooms, just like you would with a steak. And one of the best ways to do that is to avoid crowding the pan—mushrooms are prone to dumping a lot of liquid, which is why they often wind up steaming themselves instead of searing. The less crowded the pan is, the less liquid they'll dump, and the faster said liquid will evaporate, allowing the mushrooms to stop steaming and start searing. You don't even have to move them around much—just let them sit and sizzle in the oil, stirring just enough to brown them on all sides. The whole process can easily take six or seven minutes, if not more.

The choice of mushrooms is entirely up to you—we almost always start with a basic cremini (sometimes sold as baby portobellos) and then add in whatever varieties pique our interest, from cultivated oyster and shiitake mushrooms to wild chanterelles and black trumpets. Incorporating more than one type of mushroom adds a wealth of nuanced flavor and texture to this dish—just keep in mind that if you use shiitakes, you'll want to remove and discard their tough, woody stems.

After a nice, crisping sear, you end up with are mushrooms that will satisfy both vegetarians and people who think bacon should be a food group. They're salty and savory, crispy and juicy.

To finish the mushrooms, we add sliced shallots to the pan and cook them until softened and tender, then deglaze the pan with some sherry wine, reducing it until it's nearly evaporated.

Then, we toss the mushrooms and shallots with kale leaves and a dressing of rich, nutty sherry vinegar, mustard, a touch of honey, and olive oil. (If you don't have sherry vinegar, a good red wine vinegar is a fine substitute.)

Today, one of us (Matt) is thrilled that the other (Emily) is fully on-board the mushroom train. Now, if only we could agree on Marmite and kidney beans... 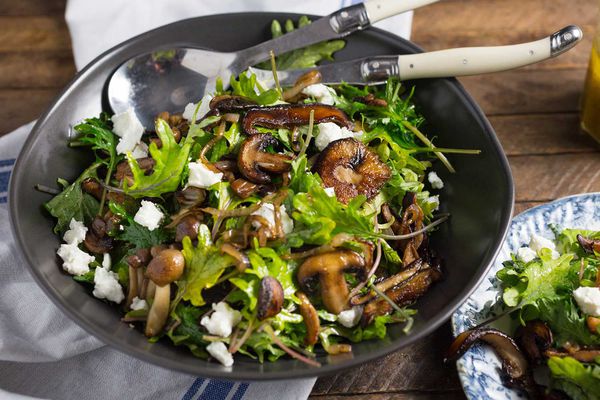 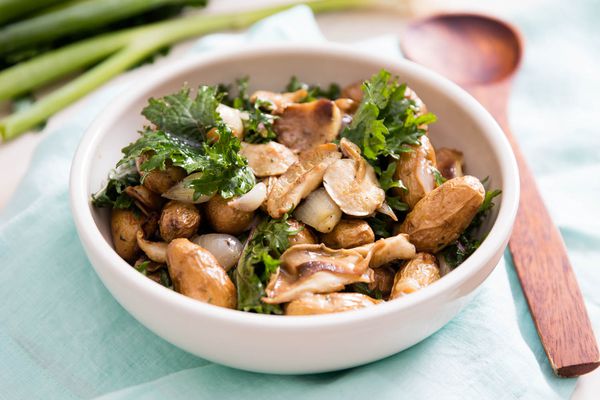